Like politicians, chemical molecules can lean left or right. Some compounds exhibit handedness — their architecture can assemble into one of two states that are mirror-images of each other. Such is the case for several components of biologic life. Now, for the first time, astronomers have discovered a compound in space with this brand of two-facedness, known as chirality (pronounced “kai-ral-ity”). The new discovery sets the stage for an interstellar laboratory for studying the origins of this property — and by proxy, the origins of life.

Examples of life-altering chirality are everywhere. Chemical one-handedness can dictate whether a mushroom is poisonous, or whether a fruit smells like oranges or lemons. Monosodium L-glutamate (MSG) carries a distinctive umami taste, while its chiral partner does not. Drug makers pay close attention to chirality due to our bodies’ disparate, and often severe, reactions to chemical twins. In the late 1950s, expectant mothers took thalidomide for morning sickness, until doctors realized that impurities with its twin can cause birth defects.

These unilateral relationships are so well-established on Earth that it’s hard to pinpoint how they arose.

So in 2008, the National Radio Astronomy Observatory began searching the cosmos for answers. The astronomers aimed the Green Bank Telescope in West Virginia toward Sagittarius B2(N), a giant cloud of interstellar gas located 390 light-years away.

“Sagittarius is full of complex organic molecules,” said Brandon Carroll, a physical chemist at the California Institute of Technology and the project’s co-leader. “If a molecule has been detected in space, then it’s almost certainly been detected in Sagittarius.”

A decade ago, the team detected the first hints of a chiral chemical — propylene oxide. But then, they hit a snag. 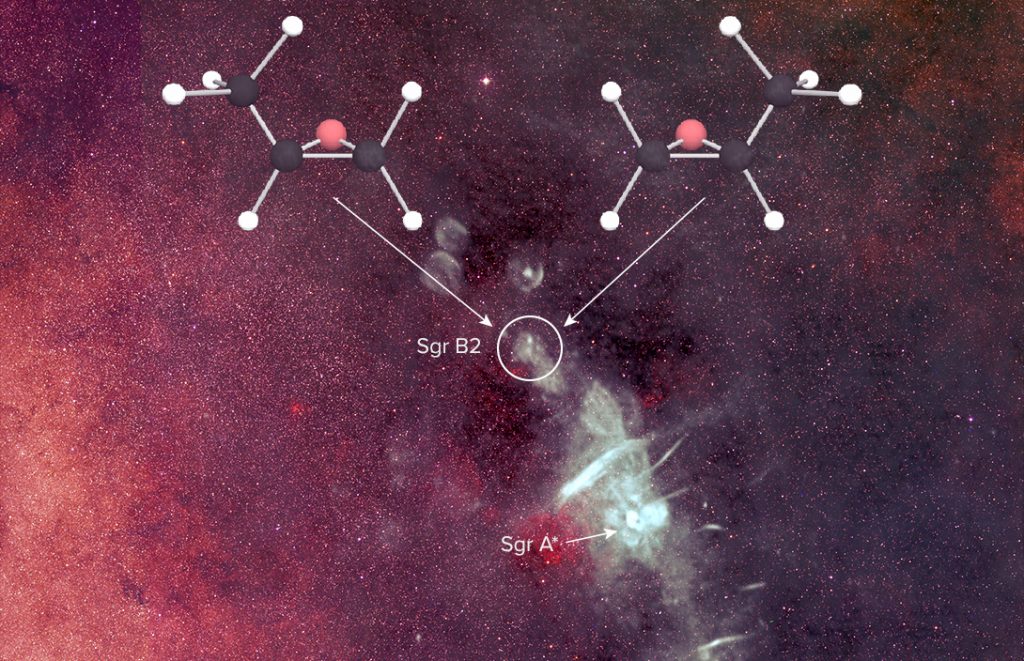 Scientists made first detection of a “handed” molecule (propylene oxide) in Sagittarius (Sgr) B2, a massive star-forming region near the center of our galaxy. The two “handed” versions of propylene oxide are illustrated. The “R” and “S” designations are for the Latin terms rectus (right) and sinister (left). Photo by B. Saxton, NRAO/AUI/NSF from data provided by N.E. Kassim, Naval Research Laboratory, Sloan Digital Sky Survey

When McGuire and Carroll tried to confirm the transmission by scanning the skies again, the telescope picked up a bunch of noise. The Green Bank Telescope observes large chunks of space at once, with high sensitivity. But the original line of sight completely obscured by interference coming from broadcast satellites.

“The advent of modern telecommunications technology means more and more of the spectrum that we like to use to detect things in space are blocked by random broadcast,” Carroll said. The Green Bank Telescope is unique because it sits in a national radio quiet zone, where things like WiFi routers in homes and cellphone towers are banned for the sake of science. But these regulations don’t prevent radio interference from satellites.

So, the team turned to Australia and the Parkes Observatory. “It isn’t blocked by satellite broadcasts, but we had to apply for time, find the money and then eventually go down there. It took a couple of years to iterate through those things,” Carroll said.

The Parkes Observatory confirmed the original signal — mirrored versions of propylene oxide, spinning like ballerinas in the Sagittarius gas cloud. The molecule is tumbling, end over end, and that’s what produces the characteristic signal, McGuire said.

Propylene oxide doesn’t play a role in organisms on Earth, although you can find it inside mattress pads and other synthetic foams. So, how might this compound sketch a blueprint for the early stages of life?

The gas cloud responsible for our solar system and Earth was evolving for millions of years before we ever got life.

Stars and planets take millions of years to form. The gas cloud responsible for our solar system and Earth was evolving for millions of years before we ever got life. Giant clouds like Sagittarius B2N contain gas and dust where stars are actively forming, McGuire said. Planets and solar systems will ultimately form around some or all of those stars. So, the chemical materials in that cloud will eventually be incorporated into those planets.

“One plausible theory is that a small excess of left-handed molecules was produced in interstellar space before our solar system was formed, and biochemical processes on the young Earth amplified that initial interstellar excess,” Ben McCall, an astrophysicist from the University of Illinois who wasn’t involved in the new study, told The Washington Post. “This theory can only be tested by observing chiral molecules in space, and this work sets the stage for such tests.”

Carroll and McGuire plan to measure how much propylene oxide is left-handed versus right-handed in Sagittarius. If there is a favoritism, then they can look for interstellar processes that are tipping the balance. One possibility is polarized light — or light that travels in a single plane.

“These light waves can be left-handed or right-handed too,” Carroll said. “Right-handed light will interact more strongly with right-handed chemical molecules…and will destroy more right-handed molecules than left.”

If they detect extra polarized light in a region where there is excess right- or left-handed molecules, then it would provide a rationale for how the chemical bias originated. They can’t observe these processes in a single cloud over time because it takes millions of years. But by looking at individual star systems at different stages of maturity, the team could clarify the early stages of prebiotic evolution.

“We want to understand the mechanisms that might drive a little more right- and left-handed molecules to be formed, not just in Sagittarius but everywhere.” Carroll said. The study was published Tuesday in Science Magazine.

Left: Chiral molecules are essential for life and a discovery in deep space near the center of our galaxy may help scientists understand why life on Earth relies on a certain handedness to perform key biological functions.Here, the Milky Way and Galactic Center rise over Lake Waiau on the summit of Mauna Kea. Photo by Brett A. McGuire