It’s been there all along. For years, scientists suspected our moon was a dry expanse, void of water — until now.

Planetary scientists from Brown University reported Monday that water exists across the lunar landscape in rocks called pyroclastics, and that those rocks originated from beneath the surface in the moon’s mantle. The findings, detailed in Nature Geoscience, challenge scientist’s understanding of how the moon formed.

“Almost all examined pyroclastics show enhanced water features, supporting that the lunar mantle is ‘wet’ at a global scale,” Shuai Li, a planetary scientist and the study’s lead author, said via email.

Scientists have been looking for water on celestial bodies beyond Earth as far afield as the dwarf planet, Pluto. But they’ve looked close to home, too. Pyroclastics — glass-like volcanic sediments captured during Apollo missions to the moon and brought back to Earth — contained trace amounts of water and even harbored as much H2O as some rocks on Earth do. 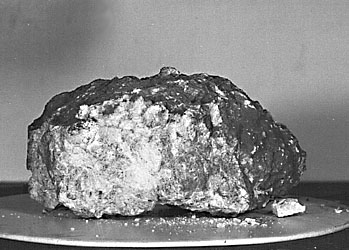 This Apollo 15 anorthosite — an igneous rock — is white with a black glass coating. Lunar volcanism occurred mostly as lava floods that spread horizontally across the moon’s surface. Photo by NASA

Li wondered if water existed elsewhere on the moon, so he turned to the Moon Mineralogy Mapper, or M3. That’s a special instrument aboard India’s Chandrayaan-1 spacecraft, which captures near-infrared light bouncing off the moon’s surface. Different chemicals on the moon’s exterior interact with the light, producing characteristic reflections — “signatures” — that reveal the compounds’ identities.

Eight years ago, researchers used M3 to spot signs of water at the lunar poles, but doing the same for the rest of the moon is complicated.

The problem is that daytime temperatures on the moon’s surface — reaching upwards of 260 degrees Fahrenheit — can distort or obscure light measurements made by M3. So, Li developed a new model to analyze M3’s data that accounts for this lunar heat. He then mapped where water might be across the moon’s terrain, and estimated how much existed in those places.

He found scant evidence for water on the surface of the moon near the equator with one notable exception: glass-like pyroclastic deposits.

These pyroclastic rocks were made by volcanic eruptions, triggered when a Mars-sized meteorite violently collided with Earth around 4.5 billion years ago and formed the moon. These lunar eruptions continued up until 1 billion years ago, and Li’s results suggest water became embedded in the moon’s molten mantle during this period or soon after. The water is now chemically trapped inside the leftover volcanic rocks, and not sloshing around as a liquid.

But, the water could have come from other sources after the volcanoes ceased. Solar wind could have generated the water by reacting with oxygen on the lunar surface. Or, water-rich meteorites and comets could have crashed into the moon.

Li wanted to clarify the moon water’s origin. So, when he ran his model, he used a conservative threshold for all the water signatures that were possibly made by solar wind and then focused on sites with readings above this threshold. Many pyroclastic deposits detected in the study had three to four times more than this background limit. Meanwhile, the water signatures were not located near craters or other geologic formations suggestive of meteorite and comet impacts, ruling out the idea that the water was left behind by foreign objects.

Similar to how lava disperses after a volcanic eruption, pyroclastic deposits with more water were spread out across a greater land area, further indicating the water originally came from the moon’s mantle and erupted out of now dormant volcanoes.

“The distribution of these water-rich deposits is the key thing,” Ralph Milliken, a planetary scientist and senior author of the study, said in a statement. “They’re spread across the surface, which tells us that the water found in the Apollo samples isn’t a one-off.”

“Lunar pyroclastics seem to be universally water-rich, which suggests the same may be true of the mantle,” Milliken said.

Yet Li and Milliken’s study leaves some questions unanswered, namely what is the source of water in the lunar interior. Was it brought by an asteroid or comet while the moon was still solidifying and covered in shifting pyroclastic flows? Or, did the lunar water somehow survive the heat generated during the moon’s formation and these early volcanic eruptions?

Regardless of its origins, the study authors said, the vast reservoir of water in the pyroclastic deposits may provide an untapped water resource for astronauts during future lunar explorations.