American Experience Looks at History and Future of ‘Earth Days’

On April 22, 1970, Americans celebrated the first Earth Day. The nationwide day of celebrations and demonstrations marked the beginning of a decade of environmental action, including such landmark legislation as the Clean Water Act and the Endangered Species Act. 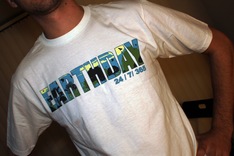 Forty years later, the American Experience film “Earth Days” takes an in-depth look at the birth of the modern environmental movement. The documentary premieres Monday night on PBS. On its Web site, you can watch the film’s trailer, read an introduction to the subject, share your Earth Day memories and, later Monday, join a Twitter discussion with director Robert Stone.

After the premiere, American Experience will air a discussion co-produced with the NewsHour and moderated by Ray Suarez about the future of the environmental movement, including whether the movement has lost momentum, to what extent environmentalists and industry now cooperate, and whether environmental action has moved from the streets to boardrooms.

Watch the film and discussion later Monday on PBS. Check your local listings.