Behind the Supersonic Stratospheric Skydive 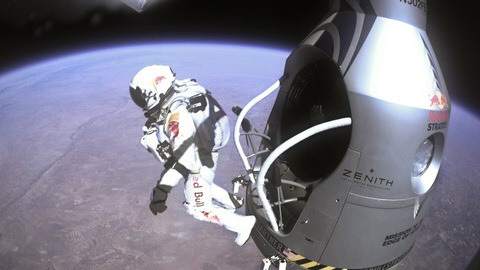 Update: 4:53 p.m. ET | On Sunday, the world watched as a helium balloon carried a capsule containing Austrian daredevil Felix Baumgartner to a height of 128,000 feet. And then, clad in an astronaut-like spacesuit, Baumgartner opened the capsule door, hovered for a moment above the Earth and jumped, reaching a maximum velocity of 833.9 miles per hour – that’s Mach 1.24.

Given the fact that traditional skydivers rarely exceed 200 mph, what enabled Felix to freefall so fantastically fast?

Because it took the balloon longer than expected to stabilize, Baumgartner jumped from nearly 8,000 feet higher than originally planned. This in part allowed him to freefall more than 100 mph faster than pre-jump estimates, exceeding supersonic speeds.

The speed of sound refers to the speed at which sound waves are produced in a given substance – in this case, air.

In the stratosphere, air density is much lower than it is at the altitude where most skydivers jump. In other words, there’s a greater distance between air molecules, which means less air resistance during a freefall.

“Terminal velocity in the stratosphere is so much higher because the air is pushing back less,” said Rebecca Thompson, a physicist and outreach specialist with the American Physical Society, who also skydives as a hobby. “That means you’re going to go a heck of a lot faster.”

Baumgartner’s freefall was so fast that at one point, he tumbled dangerously out of control. This video from Austria’s ServusTV, via Business Insider shows the jump from the perspective of his chestcam.

“I think I spun over all axis,” Baumgartner said during a press conference held soon after landing. “And for a couple seconds I had the feeling that it was a flat spin — that death spin that you fear the most.”

The danger was that a flat spin could have rendered him unconscious, causing temporary blindness and a fatal brain bleed. But he managed to regain control. He described feeling a lot of pressure in his head, but never feeling like he was about to pass out.

“You can see from the infrared camera that he tumbled for a long time,” Thompson said. “He wasn’t even able to move his body into a stable shape until he reached higher air pressure…And then all of a sudden you see him grip the air and go flat.”

This is because as he traveled down, the air became more dense, slowing the speed of his fall and thus providing him something to finally “grip.”

That air density increased exponentially as he fell, said Michael Weissman, a physics professor at the University of Illinois. “Therefore the drag increases,” he said. “So he reaches a point where the drag exceeds the gravitational force. The net force on him is thus upward, slowing the rate of his fall.”

By the time he was in the lower atmosphere, his speed had slowed to that of any normal skydiver.

Body position is also an important factor influencing speed, Weissman said. A body positioned headfirst in a vertical dive will fall faster than a body falling in a traditional horizontal skydiving pose with the belly down and the back arched.

Extremely low temperatures in the stratosphere, which plunge to -70 degrees Fahrenheit, also influence the ability to reach supersonic speeds, wrote University of Illinois geology and physics professor Susan Kieffer in this blog post.

“The speed of sound in a perfect gas depends on the square root of the temperature (in degrees Kelvin),” she wrote. “The sound speed in air at ambient sea level temperature is about 330 meters per second (about 1090 feet per second) and so he would have still been falling at supersonic velocities, though his Mach number would have been slightly less.”

The dangers of the mission were high, including brain and cardiovascular damage and a risk of ebullism, a condition that could cause the liquid in his body to turn to gas.

But Joe Kittinger, who still holds the record for longest freefall from his 1960 skydive and acted as a close advisor to Baumgartner, had this to say during the press conference after the jump:

“I’d like to give the one-fingered salute to everyone who said he was going to break apart when he went supersonic.”

Of course, it’s easier to joke now that he’s safely on the ground.

Correction: A quote in an earlier version of this post incorrectly said Baumgartner would not have reached supersonic speeds if he had been falling through ambient air temperatures.