Deep dish or New York style? How pi can solve your pizza order

I used to think Pi Day was a sham.

If we’re being honest, most of us are ready to forget about the true value of pi once we’ve finished taking the SATs in high school. On March 14 each year, rather than rejoice in a fundamental piece of geometry, most people dig into discount deals on pizza and bake pies.

Call me a science snob, but pi is much more than that. This lovely number hones our perception of the world — every single day. Pi doesn’t only come into play with circles, but also wherever cycles appear.

“A cycle means anything that repeats in time. Think about the planets going around the sun or your heartbeat,” said Steven Strogatz, an applied mathematician at Cornell University. “The world is full of rhythm, music and periodic repetition. All of those things that repeat in cycles are fundamentally governed by the number pi.”

WATCH: How the New York slice took over the pizza world

Much like pi itself, many of these essential cycles seem to stretch on forever — without repeating, never quite fitting into a sensible pattern. The Earth orbits the sun, year after year after year, but our planet and its creatures are ever-changing.

Understanding this type of abstract concept, in which some things can repeat infinitely while also simultaneously changing — has been possible thanks to numbers like pi. Strogatz argues in an upcoming book — “Infinite Powers: How Calculus Reveals the Secrets of the Universe” — that human comprehension of pi helped us tame this sense of infinity, starting 2,300 years ago with the Greek mathematician Archimedes.

And when we’re not using pi to explain the bounds of boundlessness, it helps us make basic choices about circles — from judging curves as we steer our cars to figuring out whether the size of our eyeglasses really fit our faces.

Or the biggest quandary of them all: how to optimize your pizza order for your party.

Should you buy one large 16-inch pizza or two 8-inch mediums to feed the most people?

Thanks to pi and simple geometry, we know that you should always buy a large.

The large pizza is wider — in other words, it has a bigger diameter. (Duh.) But it also covers twice as much space as the two smaller pies. How do we know?

Cast your mind back to your geometry class, and you’ll remember that you find the area of a circle by squaring the radius and then multiplying all of that by pi.

WATCH: The best ways to slice your pizza, according to math

In the case of the large pizza, the area would be 200 square inches, while a single medium would be 50 square inches. A large has four times as much pizza as a single medium pie — or twice as much as two mediums. And if you upgraded another 2 inches, an 18-inch extra large carries 25 percent more pizza than a large.

But hold the phone. There’s a faster way to make this calculation, and you can throw away pi and your calculator with this trick.

Just compare the diameters of the two pizza sizes and you instantly know how much more comes in a large. Let’s rewrite the area of a circle in terms of the diameter, so, “pi” becomes “pi divided by 4” and r-squared becomes the diameter squared. 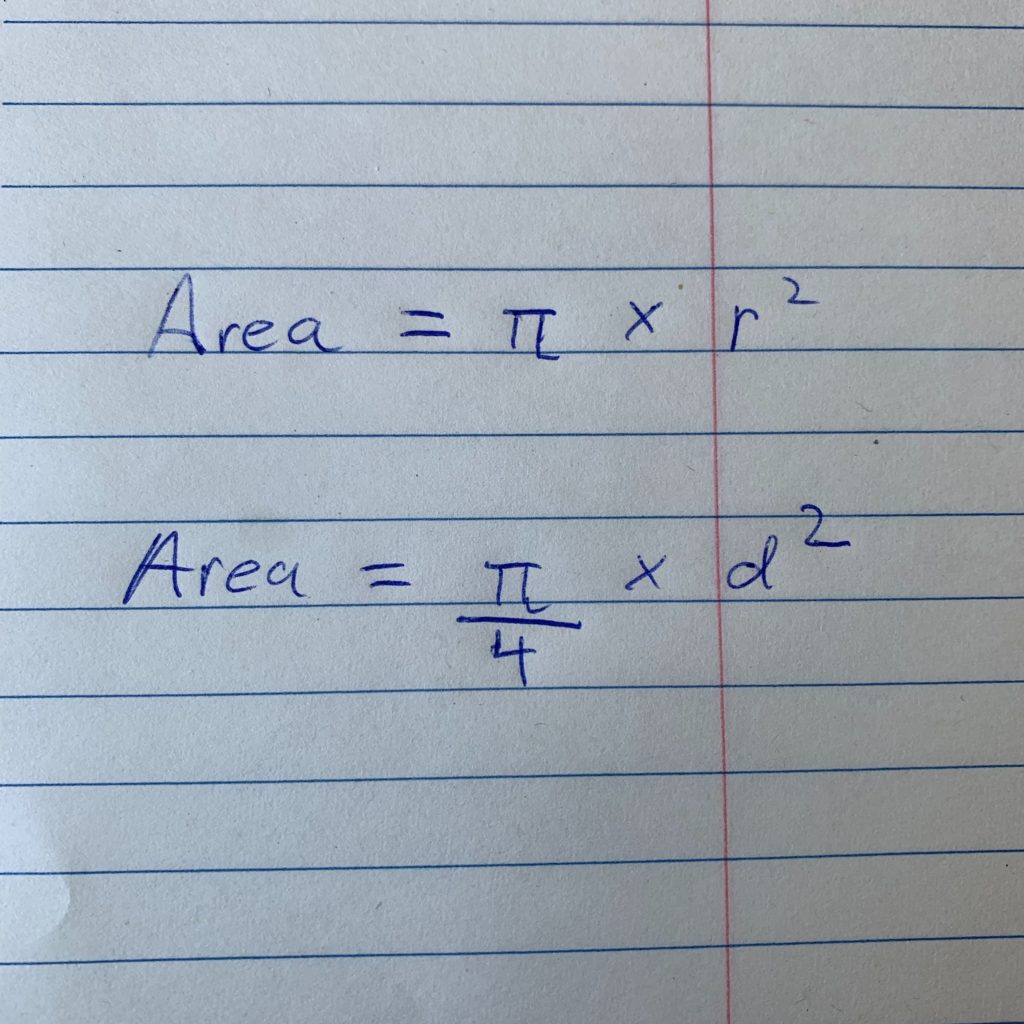 Here’s the shortcut. Scratch out the “pi divided by 4” and just compare the diameters of the two pizzas — so 16 inches for the large versus 8 inches for the medium. 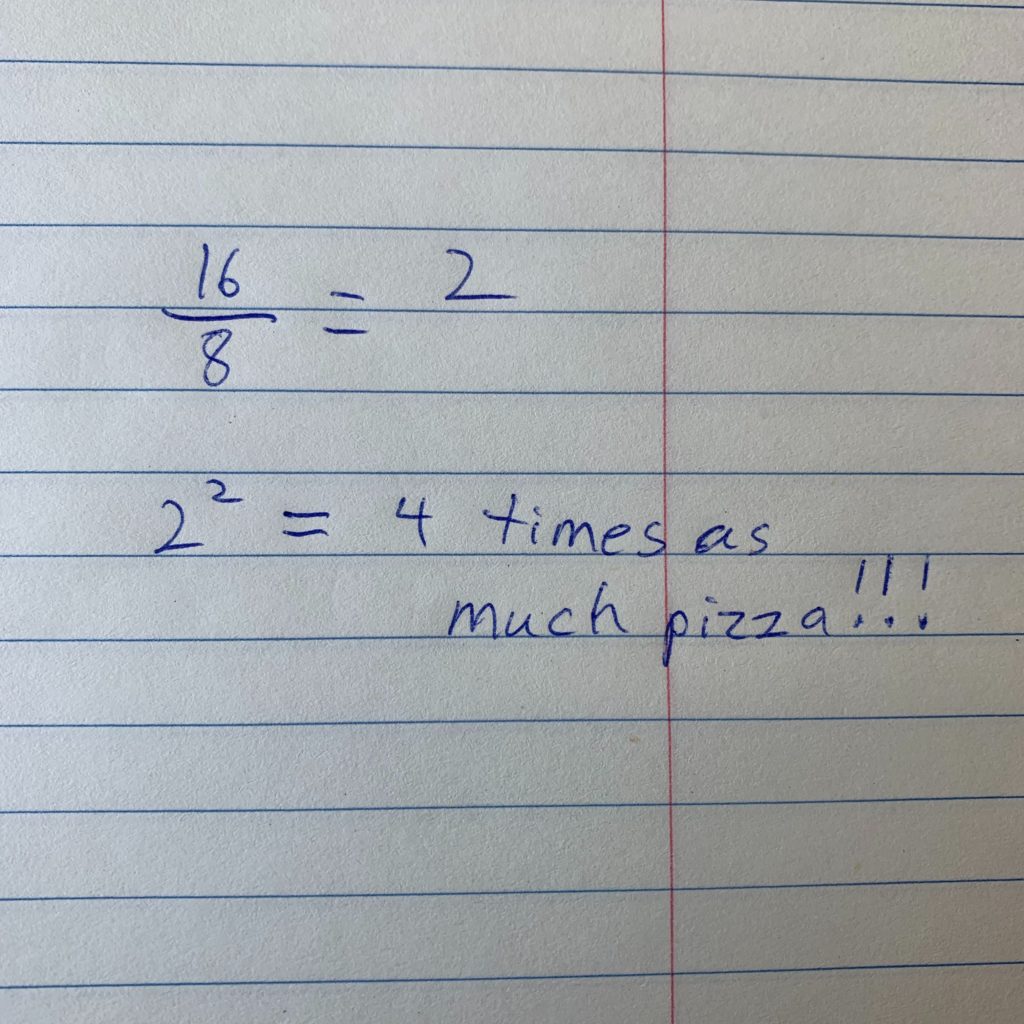 The large pie’s diameter is twice that of the medium, so if you square 2, you get 4. That is, four times as much pizza.

WATCH: Folding pizza makes it easier to hold, and here’s the proof

So unless the cost of a large is twice the price of two mediums — you should always buy the bigger one. Your mediums would need to be almost 12 inches across to make them worth it.

But wait. Should you get deep dish or New York style?

Well, the volume is just the thickness of the pizza times the area. If the deep dish pizza is 2 inches deep, while the New York slice is half an inch…that’s four times as much depth. Stated differently, a 16-inch deep dish would have 400 cubic inches of pizza, while a similar sized version of the New York variety would only contain 100 cubic inches.

To match the volume of the deep dish pizza, you would need the flatter New York style pizza to be twice as wide. Because as we’ve already learned, doubling the diameter quadruples the area.

You could also buy four New York style pizzas of the same size as the thicker pizza — or forgo the New York slices altogether and just go with the deep dish.

Except deep dish is actually casserole and not pizza. That’s right, Chicago. I said it.