It has been 27 years since an attack on a U.S. military convoy in the Middle East left Army reservist Melissa Dengan, now 63, with such serious head trauma that she was unconscious for five days. “I woke up back in the United States, and didn’t know how I got there,” she said. “I was pretty muddled for a while.”

“A while” turned into decades. A captain when she left active duty, Dengan eventually returned to school for a nursing degree. But bouts of overwhelming depression, anxiety, and other symptoms of post-traumatic stress left her struggling to concentrate, remember, and learn. Group therapy helped with some of the psychiatric symptoms, but nothing worked for the cognitive ones. On a good day she could read only a few paragraphs of a textbook before her attention evaporated; her short-term memory was in such tatters that when she left the stove for even a few minutes to go to the bathroom, she’d forget to go back — once starting a kitchen fire.

Now, however, a Pentagon-funded study has found that a specific form of computer-based brain training can improve cognitive performance in vets such as Deegan who suffered persistent mental deficits after a mild traumatic brain injury (TBI), researchers reported on Thursday at a conference in Washington. If the results hold up, the training, a commercial product called BrainHQ, will be the first intervention shown to do so.

An estimated 15 percent of veterans who have suffered a mild TBI, such as from the blast waves from an explosion, never recover fully. (“Mild” refers to how deep the injury, from the brain hitting the inside of the skull, penetrates.) Considered the signature wound of the wars in Afghanistan and Iraq, it has been diagnosed in 314,000 members of the armed forces who served there, leaving many with lifelong cognitive impairments in memory, planning, attention, judgment, and understanding. In-person “cognitive rehabilitation,” which includes speech-and-language therapy, physical therapy, and occupational therapy, seems to help some people somewhat, but there is “limited” evidence that it works, a 2011 report from the Institute of Medicine concluded.

The new therapy was not a home run. Although BrainHQ raised the vets’ scores on tests of long- and short-term memory and other core cognitive functions, those improvements did not seem to translate to everyday tasks such as how quickly they were able to read ingredient labels, make change, and look up names in a phone book.

“What this suggests to me is that the benefits are pretty limited, to cognitive tasks similar to those in the brain training program, and don’t appear to generalize to tasks closer to what we experience in the real world,” said psychologist Art Kramer of Northeastern University, who was not involved in the study. “However, this is not unusual for cognitive training. There is some ‘near’ transfer but very little ‘far’ transfer.” 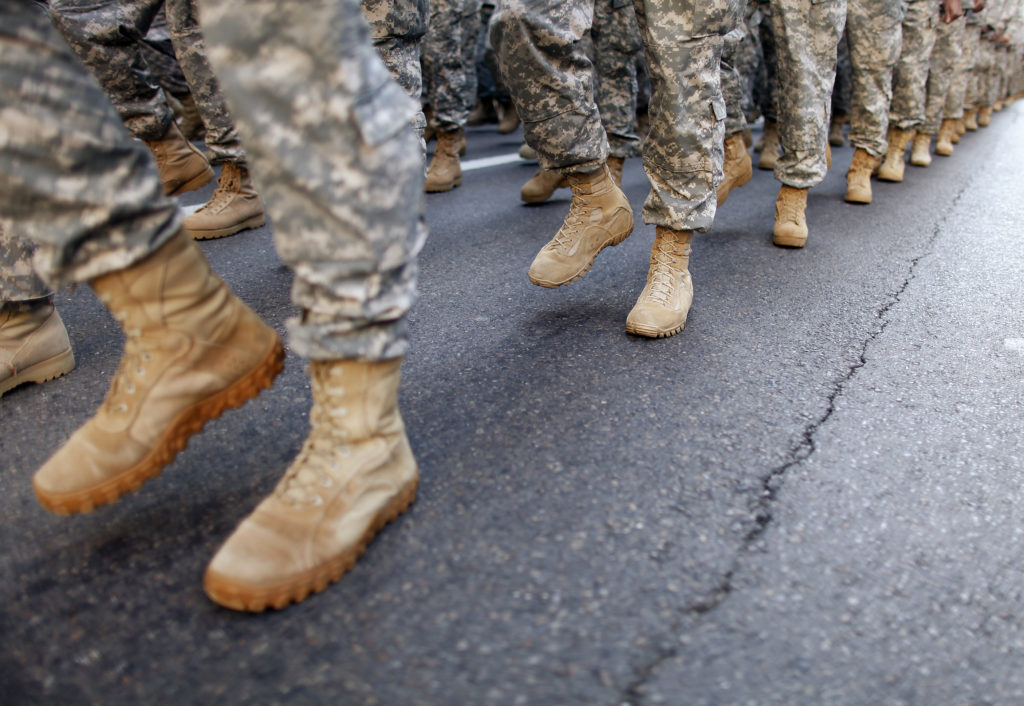 Members of the Army march up 5th Avenue during the Veterans Day Parade in New York November 11, 2012. Photo by Carlo Allegri/ Reuters

The study authors suggest that the timed tests of real-world tasks (developed to assess the elderly, not TBI patients) might not accurately capture the vets’ improved cognitive function. “Some of our vets have never used a phone book,” said study co-author Joe DeGutis, a psychologist at the Veterans Affairs Boston Healthcare System and Harvard University. “I think we missed the target in terms of finding something that would show their real-world cognitive abilities.”

Dengan, for one, said that even before she finished the standard 12 weeks of training she was “able to retain more information from what I read, and my long- and short-term memory problems don’t seem as severe. Before, every time I’d read a book, I’d lose my concentration and go back, and it was like reading a whole new novel; I didn’t remember anything. But since the brain training I’ve been able to read whole books without going back.”

The “BRAVE” study, conducted at five military and Veterans Affairs health care sites, included 83 people with cognitive impairment following mild TBI (18 dropped out of the study, most because of the time commitment or because they moved). Half were randomly assigned to use BrainHQ and half to practice computer games like hangman and Boggle, in each case in their homes for an hour per day, five days per week.

After 12 weeks, the games group had improved on a standard 100-point assessment of cognitive function by an average of 2.3 points. The BrainHQ group improved by 9 points, on average. After another 12 weeks, when the participants were not using either intervention, the games-group’s improvement had fallen to 1.9 points, but the BrainHQ group maintained its gains.

Of the vets using BrainHQ, 77 percent improved in cognitive function, but only 38 percent of the games-playing vets did.

Although 83 is a fairly small number of participants, BRAVE nevertheless met the criteria that the American Academy of Neurology has set for research assessing the efficacy of an intervention. It included a control group, randomly assigned participants to that or to the BrainHQ group, and “blinded” researchers to which group a participant was in. It is the first study of brain training in TBI to do so. Still, the findings would be more persuasive if published in a peer-reviewed journal and replicated in a larger study.

Computerized brain training has had a bad name for years, as many of the software’s creators made such over-the-top claims that neuroscientists banded together to call them out. One company paid $2 million to settle federal charges of deceptive advertising.

Posit Science, which developed BrainHQ, has always held itself apart. It argues that its exercises uniquely tap into the brain’s basic neurological functions. “While other programs might try to train memory directly, we train from the bottom up, including on the speed and accuracy of information processing” in the brain, said neuroscientist Henry Mahncke, CEO of Posit Science, which coordinated the BRAVE study.

That makes the exercises in BrainHQ (which Posit sells for $8 to $14 per month) boring compared to those in some other brain training programs. Users perform tasks such as deciding whether two shapes on the screen are the same color or shape; freezing a moving screen when an image resembling an earlier one appears; and remembering where identical-looking butterflies briefly flashed on the screen. These exercises may seem elementary, “but we think we understand the principles of brain plasticity, and apply them, better than any other program out there,” Mahncke said

Although BrainHQ did not improve the vets’ times on real-world tasks, it did improve their self-reported ability to plan their days, make appointments, remember why they walked into a room, and other functions controlled by the frontal cortex.

“We can’t definitively say that everybody who has had a TBI should do this” form of brain training, the VA’s DeGutis said. “But some people showed pretty big benefits” compared to the control group, “with large improvements in objectively measured cognitive functions.”

This article is reproduced with permission from STAT. It was first published on May 16, 2019. Find the original story here.

Left: The sign of the Department of Veteran Affairs is seen in front of the headquarters building in Washington, May 23, 2014. Photo by Larry Downing/ Reuters