Illinois officials remain on high alert, following the discovery of an Asian carp caught in late June on the wrong side of electric barriers built near Chicago to keep the invasive species from entering Lake Michigan.

The discovery of the fish in the Calumet River, nine miles from Lake Michigan, comes as federal and state officials have renewed calls for the release of a U.S. Army Corps of Engineers study that could offer “a range of options and technologies” to tackle the threat of Asian carp and other invasive species. The report’s release was delayed by the Trump administration in February.

By tracing where this single carp had lived, researchers hope to prove whether the fish breached a series of three barriers used to block the species from entering the Great Lakes. The carp, which can grow up to 110 pounds and eat 20 percent of their weight every day, have spread up the Mississippi River and other Midwest waterways over the last several decades.

A two-week search conducted in response to the June 22 capture of the fish found no evidence of other Asian carp above the barrier, located about 37 miles from Lake Michigan, officials said on Monday. 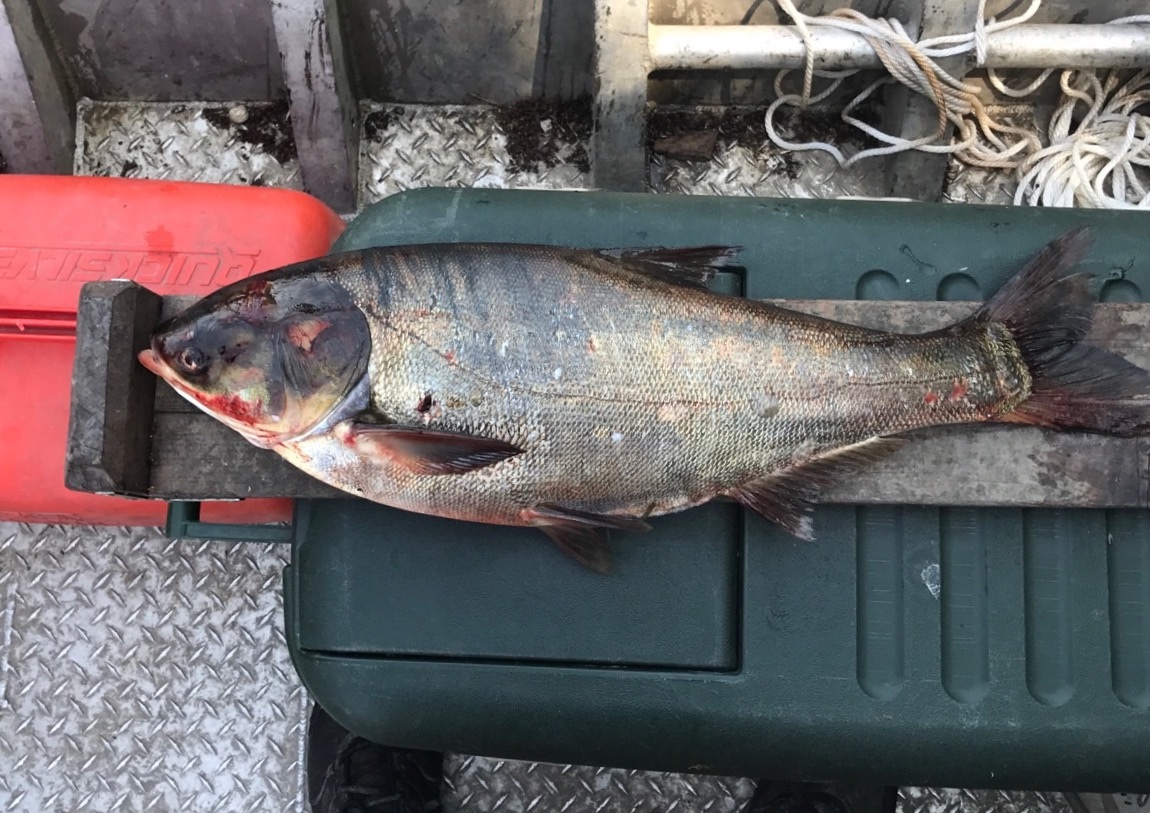 Shown here is an image of a lone Silver carp captured in a Illinois waterway on June 22, 2017 below T.J. O’Brien Lock and Dam. The fish was captured with a gill net after an intensive monitoring period, officials said. The Silver carp was 28 inches in length and weighed approximately 8 pounds. The fish was sent to Southern Illinois University for additional analysis. Photo courtesy of Illinois Department of Natural Resources

An inquiry into this carp’s origin is still underway, said Greg Whitledge, a Southern Illinois University zoologist. His team plans to examine the fish’s DNA as well as the chemistry of calcium deposits in its ear bone to trace the waterways in which it had traveled. Those findings will be released later in July.

“This is an approach at my lab at SIU has pretty commonly used to get information about the environmental history of various fish species in the Midwest here, especially the rivers, but the Chicago area as well,” Whitledge said.

Whitledge said after several weeks of work, the fish was identified by authorities as being a mature male Silver carp thanks to an analysis by the U.S. Fish and Wildlife Service.

Silver carp are one of four Asian carp species including the bighead, grass and black, that have ravaged river systems in Mississippi, Ohio, Illinois and elsewhere by eating microscopic organisms and aquatic food relied on by native fish. They were originally brought to the U.S. from Southeast Asia to clean aquaculture and wastewater treatment plant ponds in the South before they were accidentally released into the Mississippi River during flooding in the 1970s.

Whitledge, who led a similar study in 2010 the last time a lone Asian carp was found northeast of the barriers in Lake Calumet, said previous efforts to track that fish’s origins came up inconclusive. New technologies should hopefully yield greater success this time, Whitledge said.

“It gives us a better chance of nailing down a chemical signature of where it actually originated,” Whitledge said.

Officials continue to work to determine whether the fish had bred with other forms of carp, which may pinpoint whether it moved through the electric barriers on its own or was brought there by another method.

While the fish’s ear bone may help track where it has traveled, DNA analysis could show if the carp had been reared in the wild or brought there accidentally from a farm.

“My thinking is that such a hybrid would be less likely to occur if it was in a captive situation,” Whitledge said.

With potential breach of barriers, calls for action

In a show of bipartisan support, 38 Republicans and Democrats from eight Great Lakes states have co-sponsored legislation that would force the Trump administration to release the report. A bill named the Stop Asian Carp Now Act of 2017 has been introduced in the House and Senate. State lawmakers in many of the those states have also supported an expedited release of the report.

Calls and emails to the Army Corps were not returned. 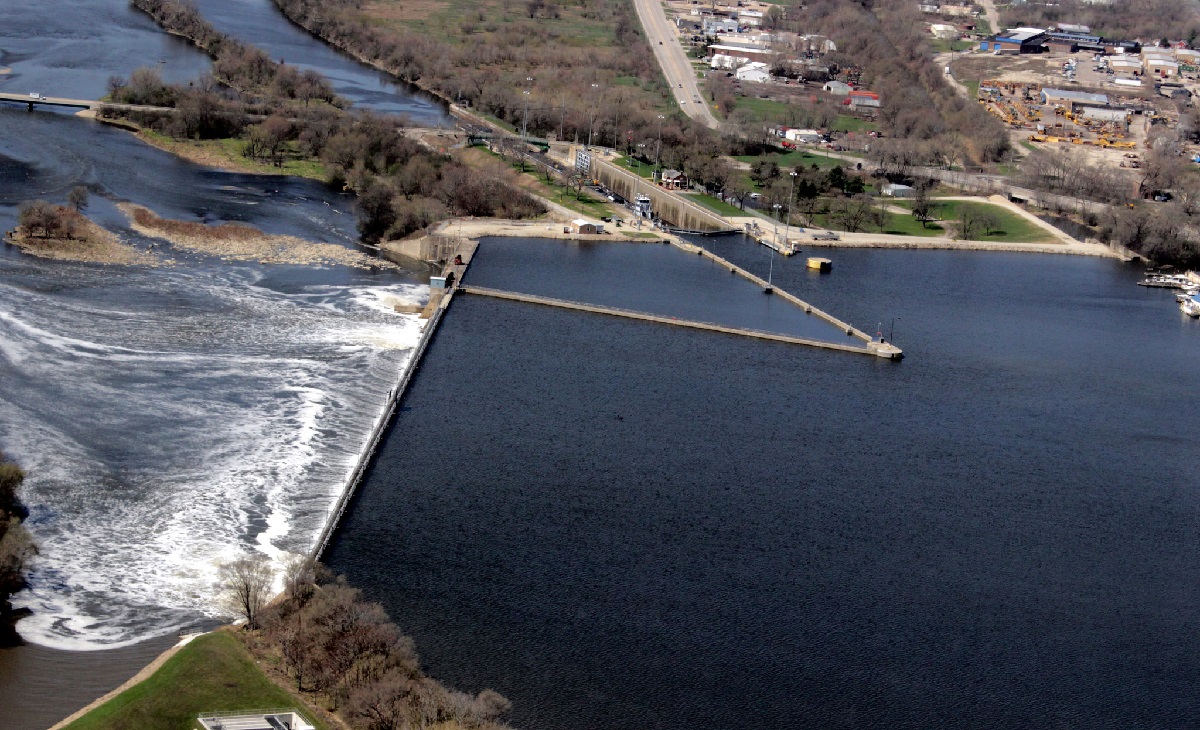 Aerial view of Brandon Road Lock and Dam, Joliet, Ill., April 22, 2014. Brandon Road Lock and Dam has been identified by the Corps Great Lakes and Mississippi River Interbasin Study (GLMRIS) Team as the downstream control point of the Chicago Area Waterway System for a number of different aquatic nuisance species controls; the topographic and geographic positioning of the site in the hydrology of the CAWS allows it to serve as a single point of passage for any species able to move upstream toward the Great Lakes. The lock has been operational since 1933. Photo By Dave Wethington via the Asian Carp Regional Coordinating Committee

While it is not unusual for a new administration to freeze reports upon taking office, pressure is beginning to mount, said Peter Annin, co-director of the Mary Griggs Burke Center for Freshwater Innovation at Northland College in Wisconsin and author of the book “The Great Lakes Water Wars.”

“I don’t know of anyone out there whose suggesting that the report should be held in confidence at this stage. I haven’t seen anybody arguing for that, and there’s definitely bipartisan support for its release,” Annin said. “It’s hard to imagine what would be wrong with the release of more information about one of the most important invasive species in the Great Lakes region.”

For years, federal lawmakers along the Great Lakes have pushed for increased funding and action to address the Asian carp issue, which they said partially threatens the $7 billion generated annually from the Great Lakes, the largest body of fresh surface water on Earth.

The Trump administration has proposed to cut 31 percent of the U.S. Environmental Protection Agency’s budget and eliminate a $300 million fund called the Great Lakes Restoration Initiative, a portion of which goes toward halting Asian carp from entering the Great Lakes.

But while the report’s release has been delayed, state officials in Illinois and elsewhere have continued to move forward with research and initiatives to reduce Asian carp numbers, according to Kevin S. Irons, aquaculture and aquatic nuisance species program manager for the Illinois Department of Natural Resources.

Irons said that since the discovery of the first Asian carp in 2010, there has been an increase in cooperation and research among state agencies, federal entities and Canadian officials, through the Asian Carp Regional Coordinating Committee. He said regional and international authorities are now better equipped to make faster assessments and share information.

“We can come back very quickly with answers,” Irons said, when situations like the recent Asian carp discovery arise. “Where seven years ago we kind of had to use our guts.”

Since 2016, the committee has released contingency and response plans to contend with a potential breach of the electric barriers by Asian carp. The latest version of the report was released on Monday.

“We want everyone to be informed by data,” Irons said.

Some of those tactics include electrofishing and commercial netting to count and track various Asian carp species.

James Garvey, interim vice chancellor for research at Southern Illinois University, said his department has been involved in research on Asian carp since the 1990s, before the invasive fish made its way up the Illinois River and the electric barriers were put in place. He cautioned against overreacting to the recent discovery of a Silver carp.

“I think we all need to take a deep breath and realize that this the first fish that we caught above the electric barrier in the Chicago area since 2010 and there has been a tremendous amount of monitoring, harvest efforts up in that part of the river to try to maintain vigilance as to whether we have fish problems up there,” Garvey said. “Does that mean that there’s more fish out there? I don’t know for sure, but it does suggest that this might be just one fish and it’s not an indication of a bigger problem.”