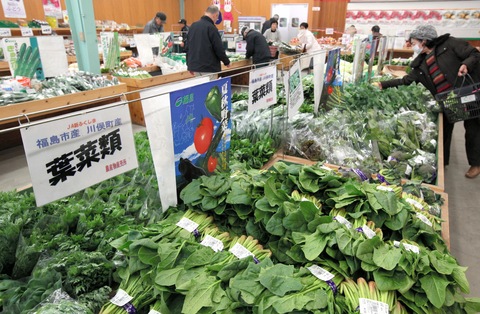 The Japanese government reported on Sunday that it had halted some food shipments to prevent tainted samples of milk and spinach from reaching consumers.

Iodine 131 was found in milk samples in Kawamata, a town in Fukushima prefecture, where the reactor sits, at levels five times the limit set by law. In the neighboring prefecture of Ibaraki, radioactive iodine was detected in spinach. Lower levels of radioactive materials were also found in leeks, chrysanthemum greens, spinach and rapeseed, a source of vegetable oil, in the Tochigi and Gunma prefectures. The radioactive material is a byproduct of the nuclear fission that occurred in the crippled reactors.

We live in a radioactive world. Trace amounts of natural radiation are always present in our food, water and soil. So how concerned should we be about the radiation in the milk and spinach samples found in Japan?

David Brenner of Columbia University’s Center for Radiological Research said the findings at this stage don’t amount to a major health hazard. It’s no surprise that radioactive particles from the crippled nuclear reactors are showing up in trace amounts in the food, he said. “That’s what we expected and what we got… The obvious thing with milk is you don’t drink the milk. And they’re not going to be selling milk that originated from that part of the world.”

Fred Mettler, a University of New Mexico radiologist, agreed, calling the levels “minimal” and “negligible,” in terms of health effects for the population.

But changing winds could blow more radioactive particles onto shore, increasing the severity of the situation, Brenner said. Now, winds are carrying much of the material into the ocean. And there’s always the danger that more radioactive material will start spewing from the reactors.

Any radiation is a cause for concern, said Arjun Makhijani, president of the Institute of Energy and Environmental Research. “From what I have seen of the modeling, I think there is a non-trivial dose to children and infants from the milk pathway,” he said, adding, “I think Japanese government is doing the right thing by forbidding food above certain limits.”

A 2006 National Academies report called “Health Risks from Exposure to Low Levels of Ionizing Radiation,” defined ionizing radiation as “radiation which has sufficient energy to displace electrons from molecules. Free electrons in turn, can damage human cells,” it reads.

Officials are closely watching levels of iodine 131, a known carcinogen. When consumed through food, the effects of radioactive iodine concentrates in one organ, the thyroid.

Radioactive iodine from the 1986 Chernobyl accident has been blamed for thousands of cases of thyroid cancer, especially among children. Many of these were caused by fresh milk contaminated with radioactive iodine. “It was because the food chain wasn’t controlled,” Mettler said. “The people didn’t know that there was radioactive iodine in their backyard that the cow was eating, and it was getting into the milk they were giving to their children.”

Particles of iodine 131 have enough energy to break apart molecules, and these particles can attack and destroy cells in the thyroid, Makhijani said. Enough cell death leads to a damaged organ. Damage to the DNA has also been linked to cancer and birth defects.

Iodine is dangerous, but relatively short lived. It has a half-life of only eight days, which means its radioactive potency is halved every eight days. “In a relatively short term, the iodine will be gone,” Brenner said. “The reactors will stop spewing out iodine eventually, and it will all have decayed away.”

Not so for cesium 137, which has a half-life of 30 years. “You’ve got a more long-term issue with radioactive cesium,” Brenner said. “The immediate risks are lower, but it will be around much longer.”

Radiation is ubiquitous in the earth’s soil, plants, air, and building materials and present in all of the food that we eat. Rocks are radioactive. Granite is slightly radioactive. Even we are radioactive. The human body contains trace amounts of potassium 40, constantly decaying.

Carbon 14 and potassium 40 enters the atmosphere from cosmic rays, charged subatomic particles from space. Small amounts of uranium come from the core of the earth. That uranium decays, producing other radioactive byproducts.

The health risks of these low levels of radiation is controversial, Brenner said, because it’s difficult to distinguish cancers caused by radiation exposure from other cancers. Levels are so low that they’re hard to tease out from other exposures, such as cigarette smoke, air particulates and unknowingly contaminated food.