Before he passed away in March, theoretical physicist Stephen Hawking had published more than 230 articles on the birth of the universe, black holes and quantum mechanics. It turns out he had one more theory left in the locker.

On Wednesday, the Journal of High Energy Physics published the British scientist’s final thoughts on the Big Bang, the leading theory for how the universe began. The new report, co-authored by Belgian physicist Thomas Hertog, counters the longstanding idea that the universe will expand for eternity. Instead, the authors argue the Big Bang had a finite boundary, defined by string theory and holograms.

But this exponential expansion should create, due to quantum mechanics, regions where the universe continues to grow forever and regions where that growth stalls. The result would be a multiverse, a collection of bubblelike pockets, each defined by its own laws of physics. 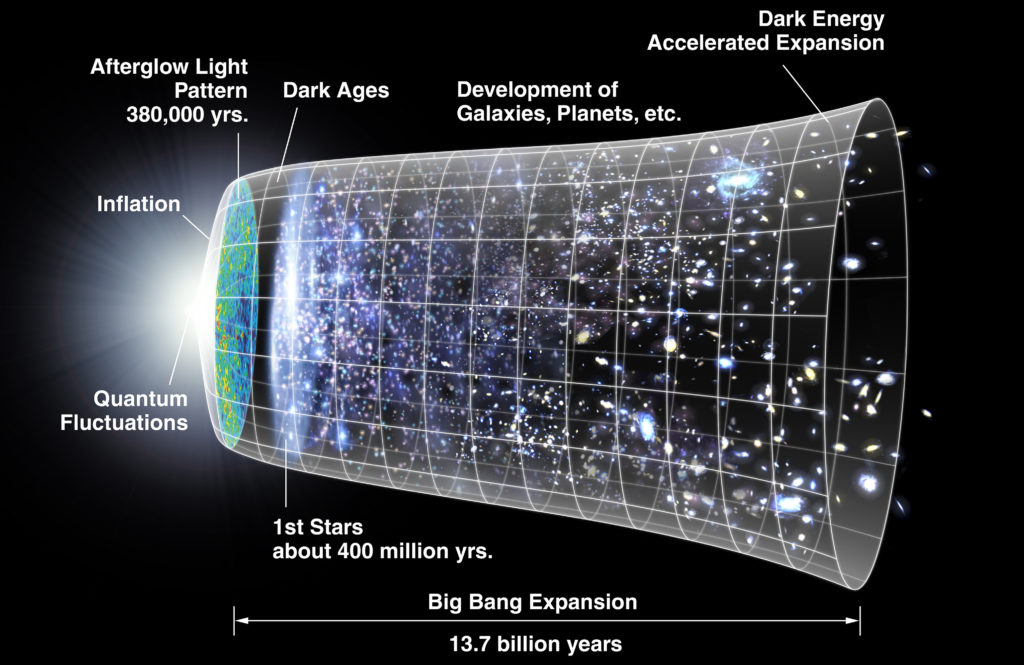 “The local laws of physics and chemistry can differ from one pocket universe to another, which together would form a multiverse,” Hertog said in a statement. “But I have never been a fan of the multiverse. If the scale of different universes in the multiverse is large or infinite the theory can’t be tested.”

Along with being difficult to support, the multiverse theory, which was co-developed by Hawking in 1983, doesn’t jibe with classical physics, namely the contributions of Einstein’s theory of general relativity as they relate to the structure and dynamics of the universe.

“As a consequence, Einstein’s theory breaks down in eternal inflation,” Hertog said.

Einstein’s theory of general relativity says space and time aren’t fixed, but bending to the forces of gravity. But the concept doesn’t fit with quantum mechanics, the quirky physics that deals with the smallest of things — subatomic particles.

Einstein spent his life searching for a unified theory, a way to reconcile the biggest and smallest of things, general relativity and quantum mechanics. He died never having achieved that goal, but leagues of physicists like Hawking followed in Einstein’s footsteps. One path led to holograms.

Last July, Hawking and Hertog presented this new theory of the multiverse during a conference at the University of Cambridge to celebrate Hawking’s 75th birthday.

Their idea hinges on the so-called “holographic principle.” As its name suggests, the principle argues that the universe is a hologram. The principle hails from string theory, the branch of physics trying to make general relativity and quantum mechanics coexist.

Hawking and Hertog’s new theory plays off this idea, suggesting the world as we know it can be reduced mathematically into a simplified version of itself…

String theory stipulates the world is made of strings, existing mathematically as nine dimensions of space and one dimension of time. You’re familiar with the first three dimensions — length, height and depth — and hopefully the fourth, time.

But one of those strings dictates the presence of gravity. Remove it, and gravity no longer exists.

Hawking and Hertog’s new theory plays off this idea, suggesting the world as we know it can be reduced mathematically into a simplified version of itself — that can be expressed without gravity. It’s almost like a 3-D projection being explained in 2-D — or a hologram. (There’s actually evidence that the world works this way).

Now, imagine you were to do the same thing for time: remove the string that governs it. This forms the basis of Hawking and Hertog’s new theory.

If time is a removable string, then there could be places or moments in the history of the universe that operate without it.

In Hawking and Hertog’s newest theory, time is the fly in the ointment, keeping cosmic inflation from aligning with general relativity. So they treated the moments after the Big Bang, when inflation occurred, as a timeless state. In essence, they’re saying this period of inflation operated outside the bounds of Einstein’s relativity.

That, in turn, would reduce the number of local laws governing the universe and bring scientists closer to a unified theory.

This concept contradicts an idea that Hawking proposed decades ago: that the beginning of time had no boundaries. “Now we’re saying that there is a boundary in our past,” Hertog said. In other words, that boundary is the absence of time right after the Big Bang.

Their report said these calculations tame the multiverse, creating a simpler and more consistent structure of the universe.

“We are not down to a single, unique universe, but our findings imply a significant reduction of the multiverse, to a much smaller range of possible universes,” Hawking said in an interview last autumn.

Some physicists point out that the Hawking-Hertog theory is preliminary and should be considered speculation until other mathematicians can replicate its equations.

You can judge for yourself. Hawking’s final paper is open-access and available for download at the Journal of High Energy Physics. Or you can read a preprint version of the piece down below, courtesy of arXiv:

Left: Stephen Hawking's final theory challenges the existence of the multiverse and argues the Big Bang had a finite boundary, defined by string theory and holograms. Photo by Santi Visalli/Getty Images