The prospect of catching germs while at the hospital sounds about as pleasing as a run-in with a shark in the ocean. However, those aquatic predators — or at least their skin — may be the key in helping the hospitals of the future keep those harmful germs from spreading. 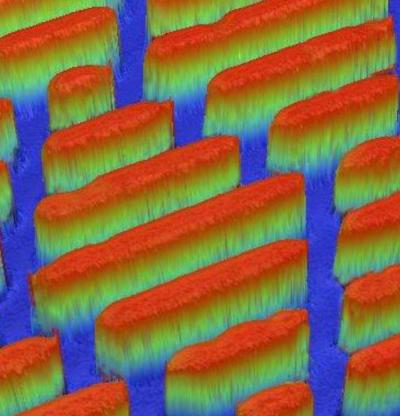 Sharklet, a material that mimics the properties of shark skin, may be a solution to preventing the spread and growth of disease-causing bacteria in hospitals. Image by Mann et al., Antimicrobial Resistance and Infection Control

A new study published September 17 in the journal Antimicrobial Resistance and Infection Control examined the effectiveness of a shark skin-like material in preventing the spread of disease-causing bacteria. The material, Sharklet, mimics the tiny ridges and grooves that permeate shark skin, which allows the creatures to prevent barnacles and other organisms from latching on to them.

The researchers spread bacteria like antibiotic-resistant Methicillin-resistant Staphylococcus aureus, or MRSA, over smooth surfaces as well as the Sharklet, recreating how the germs could be spread via sneezing or touching in a hospital environment. After comparing the surfaces, the Sharklet material was found to contain 94 percent less MSRA bacteria than smooth surfaces.

“Shark skin itself is not an antimicrobial surface, rather it seems highly adapted to resist attachment of living organisms such as algae and barnacles,” said Ethan Mann, a research scientist at Sharklet Technologies — the company that manufactures the material. “Shark skin has a specific roughness and certain properties that deter marine organisms from attaching to the skin surface. We have learned much from nature in building this material texture for the future.”