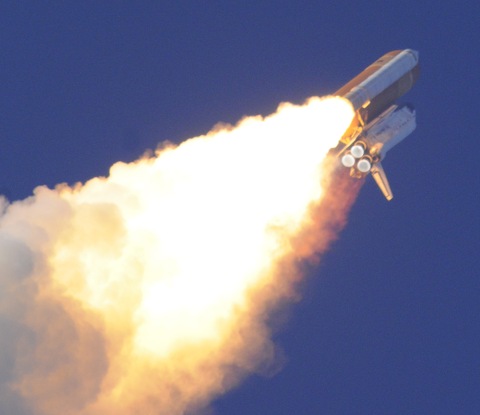 Viewer question: Was there any comment on the two pieces of debris that came off about 5:48 into the video? (Watch the Discovery launch here).

The spacewalk of mission STS-133 began at 10:46 am EST, earlier than planned. Bowen emerged from the hatch first in a spacesuit with two red stripes, followed by Drew, in all white. It was Drew’s first-ever spacewalk, and Bowen’s sixth.

Aside from a dysfunctional helmet camera (Bowen’s) and a robot arm that froze mid-spacewalk, the day began as planned, with the first round of maintenance jobs under way. Tasks include installing an extension cable and camera, moving a 780-pound broken ammonia pump into storage and filling a bottle with space vacuum for the Japanese Space Agency.

The two astronauts are part of a six-person crew that launched from Cape Canaveral on Friday. It is the shuttle Discovery’s final flight, and brings NASA’s entire shuttle fleet closer to its 2011 retirement.

Three minutes and 51 seconds after Discovery blasted off on Friday, NASA’s video feed showed what looked like a piece of flying debris breaking from the shuttle.

Several NewsHour viewers commented, asking what it was, and if it was dangerous. So we did some reconnaissance:

It’s believed that the debris was a piece of foam near the upper area of the hydrogen tank, popped off by a process known as “cryopumping.” During launch, trapped air underneath the foam expands, sometimes forcing chunks of foam to break free.

Here’s how it works. Ambient air gets sucked into cracks in the foam and then condenses or freezes, said John Honeycutt, external tank project manager for NASA. As fuel heats up, that trapped nitrogen and oxygen can turn back into a gas, expanding too quickly for the foam to handle, popping it off. “So it’s like a balloon blowing up,” Honeycutt said. “You’ve got a volume in there that gets overpressurized, and the weak link is the foam, and it pops the foam.”

The event occurred beyond the time frame during which impacts can cause serious damage. The time between launch and 135 seconds into flight is known as “aerodynamically sensitive transport time.” During that time, the atmosphere is still strong enough to do damage to the shuttle during transport. This event occurred well after that window.

“We know that the phenomenon of cryopumping occurs late in the launch phase,” NASA spokesman Kyle Herring said. “If you watch [the launch video] carefully, you can see that the foam doesn’t get into any air stream. It floats around a bit before it exits.”

On Sunday, the shuttle was cleared for reentry to earth. The underside of the orbiter was photographed and no tile damage was found. “We didn’t even see a scuff,” Herring said.