With 40 mice, 400 fruit flies and 3 tons of supplies in a refurbished cargo capsule, a SpaceX rocket embarked on another mission to the International Space Station from Florida on Saturday.

It was a fairly routine launch, despite a two-day weather delay, but also another step in a significant shift toward privatizing space exploration.

SpaceX’s signature Falcon 9 rocket left at 5:07 p.m. EDT and was the 100th launch from the same pad at NASA’s Kennedy Space Center that sent the Neil Armstrong and Buzz Aldrin to the moon on Apollo 11 in 1969, as well as 82 Space Shuttle missions. But Apollo 11 was a NASA breakthrough and SpaceX is a private company founded by Tesla CEO Elon Musk that is leasing the launch pad from NASA.

While it is paid to do cargo missions for NASA now, SpaceX was founded to turn commercial space travel and the colonization of Mars into reality.

About 10 minutes after the launch, Falcon 9 separated from its cargo capsule, the Dragon, which holds nearly 6,000 pounds of supplies and will dock at the orbiting space station on Monday. 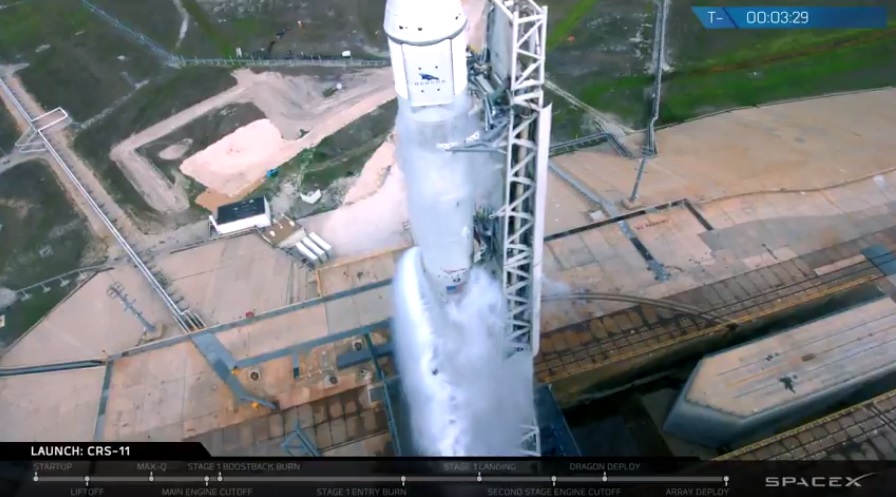 Screenshot from the SpaceX webcast on June 3, 2017

The capsule was refurbished from the SpaceX’s fourth cargo trip in September of 2014. If SpaceX succeeds in this mission, it could mark the first time a private company has been able to recycle a space craft and send it back into orbit, a step toward SpaceX’s goal of reusing most or all of its capsules.

Aboard the Falcon 9 on Saturday is a compacted version of scientist Thomas Hunt Morgan’s classic fly room, which is holding 400 fruit flies and 2,000 of their eggs to see how their cardiovascular health holds up in space. The pace of their heartbeats align closely with humans.

The capsule is also carrying 40 mice that will help researchers at the University of California, Los Angeles, test a drug that stimulates bone growth to help figure out how astronauts can preserve their own bone mass on future missions, The New York Times reported. Zero gravity makes bones fragile.

SpaceX is in the process of creating Dragon 2, which will transport crews to and from the station.

The rocket was originally scheduled to leave on Thursday evening, but the prospect of lightning delayed the mission to Saturday.

A report by the University of Pennsylvania’s Public Policy Initiative laid out the implications of privatized space travel in December.

It noted that the government’s reliance on private companies such as SpaceX can fill voids from NASA’s budget cuts with cheaper alternatives. It compared the retired Space Shuttle program, which was costing about $4 billion a year and was cut to save money, to privatized resupply services, which cost about $50 million per launch.

It also emphasized prospects for exciting leaps in space exploration. But it acknowledged critics’ worries that priorities between private companies and public interest may eventually clash. And the technology is not owned by the government or shared.

“Although there are pros and cons to privatizing space exploration, current trends suggest that many of NASA’s space exploration responsibilities are being shifted towards the private sector under government contracts,” read the report. “Whether this new model will produce discoveries and innovation in-step with former government run space research is yet to be seen.”

Left: Screenshot from the SpaceX webcast on June 3, 2017