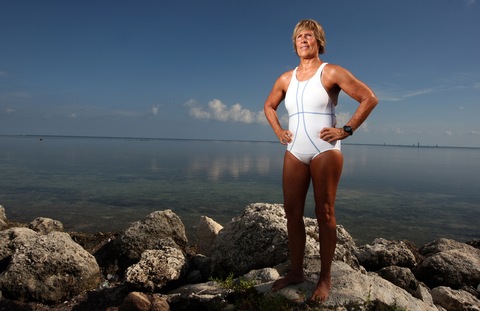 Legendary long distance swimmer Diana Nyad, 61, will attempt to be the first person to swim the 103 miles from Cuba to Key West without a shark cage. Photo by Miami Herald via Getty Images.

What does swimming 103 miles for 60 hours straight do to a human body?

As soon as the Gulf Stream water reaches the optimal temperature — not too hot, not too cold — 61-year-old Diana Nyad will set off for one of the greatest tests of human endurance, ever. She will swim from Havana, Cuba to the Florida coast — a 103-mile swim.

As she swims for an anticipated 60-some hours, pausing only to tread water and refuel, her glycogen levels will get depleted, her core body temperature could rise or drop dangerously, and she’ll risk dehydration and lose muscle mass.

“With this type of swim, I would be interested in tracking things like hydration levels, core temperature, lean muscle and fat changes,” said Bruce Johnson, a Mayo Clinic physiologist who researches heart and lung interactions during extreme exercise.

Dr. Michael Joyner, a Mayo Clinic anesthesiologist and exercise researcher, said that the hardest part for the body likely won’t be the exercise itself, which he calls “moderately paced,” but the lack of sleep, maintaining a healthy body temperature and getting enough fuel to the muscles.

Thermo-regulation will be key. If the water temperature gets too high, Nyad could risk dehydration and hyperthermia, which can cause the blood pressure to drop and the brain and other organs to overheat. “Once the brain gets hot, you really start to shut things down,” Joyner said. “And the urge to exercise can go away.”

If the water temperature gets too low, she’ll risk hypothermia, which, untreated, could lead to heart and respiratory failure. She’ll need a minimum of 86 degrees Fahrenheit, with temperatures ranging from 86 to 98 degrees inside the Gulf Stream.

When it comes to fuel, each extreme athlete has their own well-tested formula. Frank Shorter, a marathon runner who won the gold medal in the 1972 Summer Olympics, was known for fueling with flat coke. Danny Miller, a 31-year-old super long distance runner, who has completed two 100-mile runs and more than 20 ultra-marathons, gets through his long runs on potato soup and Oreos.

And Nyad? Nyad will swallow a liquid mixture of predigested protein and eat occasional bits of banana and peanut butter, according to this New York Times story.

Sleeping is not an option, and resting isn’t really rest — the closest she’ll come is pausing to tread water. Extreme athletes often report hallucinations on long, sleepless treks. Miller recalls seeing a Hawaiian luau in the woods during one ultra-marathon run, complete with tiki torches, barbecues, beer and people dancing. During another, his vision got “bubbly,” as if the world was underwater.

Such hallucinations result from a confluence of factors, Joyner said: sleep deprivation, low glucose levels and other metabolic changes.

And physical tests aside, the water adds its own collection of environmental and logistical challenges. Strong currents have been known to drive swimmers off course. Nyad will also be swimming in water populated by menacing marine life. In fact, she’ll be the only person who has ever done this particular swim without a a strong metal “shark cage” pulled by a boat and built to withstand ramming by sharks. A sting by a Man of War jellyfish could be dangerous — venom from these jellyfish shoot straight to the brain, and can cause nausea, convulsions and hallucinations. Nyad writes about it here.

Nyad commented on many of these potential problems herself in a letter that she posted on her blog:

“The first half will bring potential dehydration, due to the extremely hot water temps,” she wrote. “But the second half danger will be hypothermia as I start losing weight and am immersed in a liquid much below normal body temps.”

She blogs about the difficulties associated with the powerful Gulf Stream: “swirling eddies throughout, Westerly counter currents off the Cuban coast, and potentially strong counter-tides off the Florida coast.”

Joyner said he was frustrated by the number of comments to online stories about Nyad’s training and expedition that questioned why she was doing the swim, why anyone would do such a thing. “Those questions miss the point,” he said. “At some level, you’ve got to admire anybody who wants to test the limits of human potential in general, and her own limits, in specific…It’s a good thing we’re not all average.”

And as to whether these ultra-endurance events ultimately strengthen or harm the body? That’s a question with many layers, Johnson said.

People who build up slowly over the years seem to do okay, but ramping up training too quickly can lead to problems, he said. He points to the Tamahara Indians, who are known for walking and running extremely long distances from a young age. “They do well over many years without extensive late-in-life problems,” he said.

And while single extreme endurance events can lead to a significant loss of muscle mass and injury, he said, “highly trained people seem to recovery quickly and do well if hydrated and fueled appropriately. Their ability to recover, repair, etc. seems to be quite good and maybe enhanced.”

Plus, he adds, “swimming has less trauma than running due to the lack of an impact from the foot strike. So, less breakdown. Worries are more related to maintaining core temperature if water is cold, cooling if water is hot, and hydration and fuels.”