Can we save our body’s ecosystem from extinction?

Some bacteria are indisputably bad. But others boost our immunity, protect us from infection and produce the enzymes we need to digest our food. Without these bacteria, we wouldn’t survive, says Dr. Martin Blaser, author of the new book “Missing Microbes.”

“They are kind of a part of us,” Blaser said. “And my fear is that some of them are going extinct.”

Humans in the U.S. have lost a third of their microbial diversity, mostly on their skin and in their stomachs and digestive tracts, said Maria Gloria Dominguez-Bello, associate professor of medicine at NYU.

The problem is due in part to the overuse of antibiotics, C-sections and modern sanitation, Blaser says. And he believes that microbe extinction may be at the root of modern plagues like asthma, allergies, diabetes, obesity and even some forms of cancer.

Scientists are just starting to catalogue the human microbiome, said Lita Proctor, director of the National Institute of Health’s Human Microbiome Project. Understanding how these microorganisms interact inside our bodies is shifting the way medicine views the bacteria, she said.

“The human body isn’t just what you see in the mirror,” she said. “It’s an ecosystem, just like a forest, just like the ocean, where microbes of many different species are interacting to support the whole.”

Enter Helicobacter pylori, a spiral-shaped bacteria with a long tail that’s been called the “poster child for microbial extinction.” It was originally known for causing ulcers at a time when doctors believed no bacteria could survive the stomach’s acidic environment. In fact, Dr. Barry Marshall, who discovered the bacteria, drank a vial of the stuff, and within weeks, developed stomach pains and gastritis, precursors to the stomach ulcer. (Marshall and colleague Robin Warren earned the Nobel Prize in 2005 for their research.)

At first, Blaser too believed H. pylori was bad. But his research showed just the opposite. This microbe, he found, was interacting with the immune cells that line our stomach. And losing it appeared linked to several immune and metabolic disorders: asthma, allergies, celiac disease, even acid reflux disease.

H. pylori, like much of our microbiome, is acquired early in life. Contrary to popular belief, babies are not born sterile, Dominguez-Bello said. They inherit much of the bacteria they need from their mother’s vagina during birth. A pregnant woman’s vaginal bacteria changes and diversifies as she prepares for birth, she explained, so children born via Cesarean section may be missing out on an important inoculation. 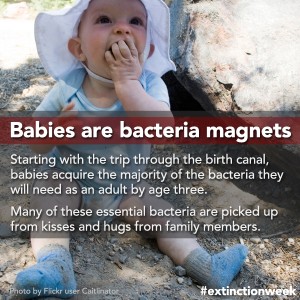 Babies are magnets for bacteria, she explained, and they continue to pick up other microbes after birth. Each hug and kiss from mom and dad exposes them to more of the bacteria they’ll need by age 3, when they should have the majority of their microbiome in place. And by age 10, if they haven’t acquired H. pylori, they likely will never have it, Blaser said.

In the early 20th century, most Americans had H. pylori in their stomachs. Fast forward to present day, and fewer than 6% of American children born after 1995 have it. These trends are the same in Australia, Germany, the Netherlands and Scandinavia. 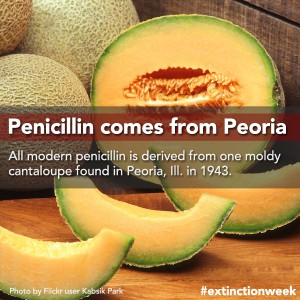 One of the key changes over the last century has been antibiotics, he said. Often life-saving drugs, they are also over prescribed for minor and non-bacterial infections, many scientists believe. And they knock out the good bacteria as well as the bad. Overexposure to antibiotics has led to the rise of drug-resistant bacteria like MRSA, making our drugs less effective against the bad bacteria.

Exposure to antibiotics early in life also increases a child’s risk of obesity. In fact, farmers use low doses of antibiotics to fatten up their livestock.

Blaser advocates saving and studying our human microbes. Dominguez-Bello has been traveling to South America and partnering with other researchers to collect skin, mouth and fecal samples from people in isolated communities. So far they have samples from Amerindians in Venezuela, the Quecha people in Bolivia, the Achar in Peru, rural and urban dwellers in Brazil and Hadza hunter-gatherer tribes in Tanzania.

“If you look at the feces or skin you can tell,” she said. “You can tell if this is from U.S. or isolated peoples…U.S. and westernized people are really outliers. We are always left with the doubt: is it really human? What is it doing there? Have we lost that function?”

Looking further back in time, the microbiomes of people in isolated communities are similar to those of our pre-20th century ancestors, said Cecil M. Lewis, associate professor of molecular anthropology at the University of Oklahoma. By studying bacteria from coprolites (that’s a fancy word for fossilized poop), he found that our cosmopolitan guts have lost bacteria like spirochaetes and prevotella, which may have helped our ancestors digest carbohydrate-rich diets and tough fibrous plants. These bacteria are now rare in modern city-dwelling stomachs.

The data is eye-opening, Proctor said.

“It’s shocking when you look at numbers how much total diversity has been lost. Is it gone from the planet, or can we recover them?” she asked. “We’re trying to come up with reference point — what’s the least disturbed microbiome?”

Dominguez-Bello hopes to culture the bacteria she is gathering around the world so it can be studied and saved from extinction. But travel and sequencing the DNA of each bacterium is expensive, and currently Dominguez-Bello has support from private foundations and is seeking federal funding. She collaborates with other researchers and rides along with government and NGOs in helicopters to reach villages on mountaintops and deep in the rainforest.

This field of microbiology is still in its infancy, and we’re still trying to understand our gut’s diversity, both past and present, Lewis said.

“I don’t think these bugs are extinct in urban populations,” he said. “I think we’ve repressed them. Certainly, it is possible for humans to drive some bacteria species to extinction, but given how easily most bacteria species adapt…it’s not easy. For example, if you look deep enough in urban populations, you’ll still find those spirochaetes …they are just much more rare.” 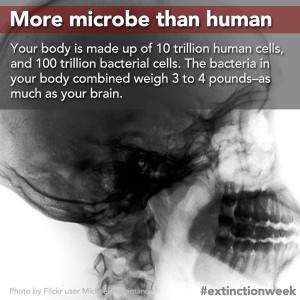 But Carl Zimmer, science writer for The New York Times and author of the book, A Planet of Viruses said that it is possible for species of microbes to vanish completely.

“From what we know about the ecology of bacteria, it certainly is possible that we could wipe them out,” he said. “Antibiotics are an incredibly powerful weapon against bacteria. You can see them knocking out species from individual people, and some species just don’t come back. If you keep repeating that, it’s harder for bacteria to keep going…if we are attacking them in the only place they can call home, it’s not like they can go anywhere else.”

Blaser thinks it’s important to preserve that environment. This isn’t to say that antibiotics or sanitation or C-sections are bad, but they do have consequences, he said. For example, he said, doctors should stop over-prescribing antibiotics, especially to young children. Researchers should work on new antibiotics that can target specific infections, minimizing the good bacteria casualties, and potentially developing effective probiotics — these are beneficial microbes introduced into the body. And go easy on the hand-sanitizers and anti-bacterial soaps, he said.

Oh, and that probiotic yogurt you’ve seen advertised? It hasn’t been studied or tested, Blaser added, so don’t trust that it will repopulate your gut.

Left: This helix-shaped bacteria called Helicobacter pylori is disappearing from our modern stomachs. Once thought of as a "bad bug", doctors are learning that this bacteria influences our immune system, our weight, and even our height. Photo courtesy Flickr/AJ Cann