These 2017 weather disasters were worsened by climate change

Washington D.C. — For the second year in a row, scientists behind a major annual climate report say they have spotted weather crises that would not have occurred if not for global warming caused by human-made climate change.

In the “Explaining Extreme Events from a Climate Perspective” report — the latest and seventh edition of which was published Monday — 120 climate scientists from 10 countries detailed the extreme weather events from 2017 and what role if any climate change played in the disasters.

The report, which is actually a collection of peer-reviewed essays from the Bulletin of the American Meteorological Society, covers incidents in every continent around the world. In many cases, they say there are links between the world’s worth weather and its ever-evolving climate. For example, without human-backed warming of the Pacific Ocean, Tanzania, Ethiopia, Kenya and Somalia would not have witnessed an extensive drought and subsequent famine last year.

“The consequences in nature are unfolding in front of our eyes,” Martin Hoerling, a NOAA research meteorologist said at Monday’s unveiling of the report at the American Geophysical Union conference in Washington, D.C. He said that in 1990, the first Intergovernmental Panel on Climate Change predicted that the world would experience exactly these types of weather events in 30 years.

Here’s a quick rundown of how some of these events unfolded in the U.S. in 2017.

Drought, The Great Plains and the Camp Fire

California may have an unwelcome reputation as a tinderbox, based on 2018’s run of huge wildfires. But last year provided some forewarning for what has happened recently across other parts of the American West, Hoerling said.

Starting in May 2017, the Northern Great Plains — namely South Dakota, North Dakota, and Montana — were swept by a four-month-long drought. Monday’s report found that climate change made this drought 50 percent more likely to happen, largely because of a drop in relative humidity. It was so dry that the region recorded its fifth lowest levels of soil moisture in nearly 40 years. At the same time, more than half of this region also experienced records lows in rainfall.

These parched conditions led to the Lodgepole Complex Fire, which devoured more than 270,000 acres in Montana and contributed to $2.5 billion agricultural losses in the state in 2017.

The conditions that promoted the Camp Fire, the blaze that killed at least 85 people last month in Butte County, California, were similar to those that enabled the 2017 fire, Hoerling said.

It may sound counterintuitive, but these massive blazes could not occur without repeated deluges of winter rainfall, which in turn lead to an explosion of plant growth, as PBS NewsHour has reported previously. And according to this latest report, monstrous winter rains also contributed to one of the most memorable calamities in recent California history: the Oroville Dam collapse in February 2017.

The dam collapse, which led to the evacuation of 200,000 people, actually started in Oct. 2016, when a three-month-long bout of abnormally warm weather began. Autumn usually turns this section of Northern California into a winter wonderland. But rather than accumulate as snowfall in late 2016, the precipitation in the Sierra Nevada mountains fell as rain.

The lack of snow left reservoir managers in difficult straits, because California uses its winter snow reserves to provide water throughout the year, including to areas that lack their own natural sources. Uncertain if snows would eventually come, water managers began to fill their reservoirs with rainwater. That decision spelled trouble for Oroville Dam when the snow did arrive in early 2017. By the end of April, the water content in the snowpack was 170 percent above normal. 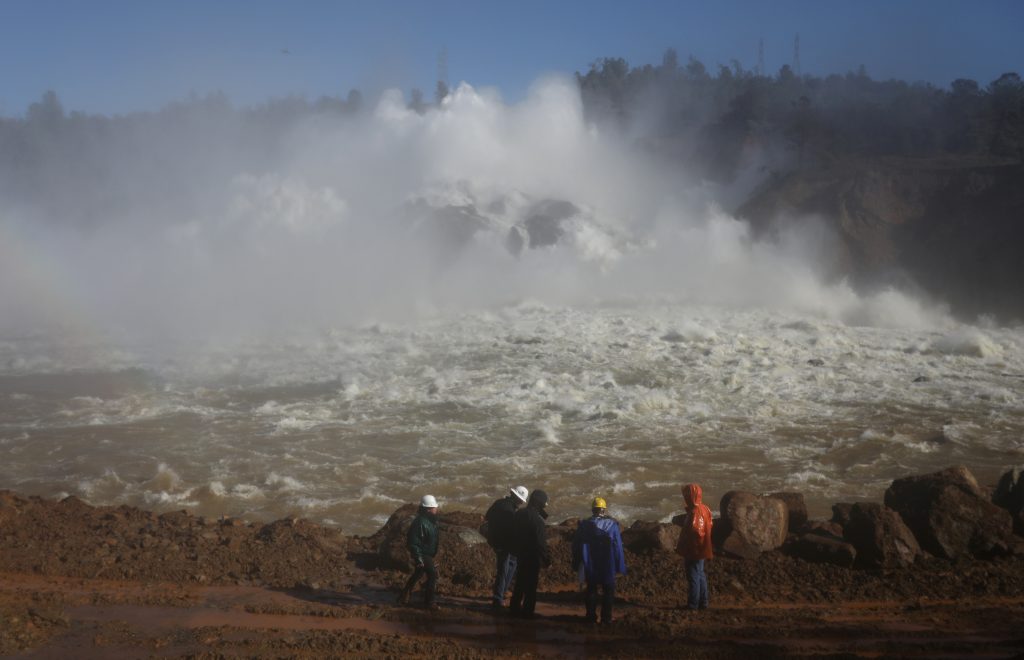 Water is released from the Lake Oroville Dam after an evacuation was ordered for communities downstream from the dam in Oroville, California, U.S., February 14, 2017. Photo by Jim Urquhart/REUTERS

“There were lots of reservoirs out there that were really close to overtopping,” said Julie Vano, a water resources researcher at the National Center for Atmospheric Research, who co-authored one of the essays.

Her team’s essay explores how a similar situation — water managers surprised by a lengthy unexpected deluge — helped perpetuate the flooding during another disaster: Hurricane Harvey in Texas and Louisiana. Hurricane Harvey’s extensive rainfall filled Houston-area reservoirs close to their limits, which created a “damned if you do, damned if you don’t” scenario. Water officials either have to let the reservoirs overflow, which would have caused catastrophic flooding for neighborhoods upstream of the dams, or relieve the pressure by releasing torrents of water. They chose the latter, which ultimately led to flooding downstream.

Vano and her colleagues pointed out that other nearby dams, such as New Don Pedro reservoir, didn’t suffer catastrophic failure because their infrastructure was sound. It was the combination of swollen water stores and structural deficiencies that doomed Oroville.

“The duration often determines the event severity,” Vano said. “It’s these longer duration, larger area events that we need to try to understand.”

A reduction in Arctic sea ice contributed to the lowest amount of European rainfall on record. Anthropogenic warming combined with the regular disappearance of El Nino meant less sunshine in Japan. The global increase in greenhouse gases doubled the chances of an epic rainy season in China, which displaced nearly a million people, destroyed 32,000 homes and led to $3.6 billion in economic damages.

“The planet continues to warm, and [our Earth] system is showing its hand.” Hoerling said. “It’s beginning to show its true sensitivity.”

You can read the full report here.