Why coastal Carolina may never recover from its intensifying hurricanes

Floods leave too much behind. That’s how Sherry Henderson described life in Pollocksville about 40 days after Hurricane Florence.

The storm flooded half of this North Carolina town, which sits on the banks of the Trent River, about 50 miles from the coast. For days, floodwaters stewed in the Henderson’s two-story home, where the family had lived for 26 years. Florence wiped out the family’s kitchen, den and master bedroom, and lifted the garage off its foundation. More than a month after the storm, mounds of mattresses, couches, framed pictures still lined the Hendersons’ street, along with a few pianos.

Unlike a wildfire, which burns everything, a flood ruins and spoils. Flood survivors often spend days picking through their soiled belongings, deciding what to salvage and what to shed. Despite never being troubled by flooding in the past, the Hendersons feel now is the time to decide between rebuilding or moving on.

“Our hearts are strong, and the community remains resilient,” Henderson, 54, told the PBS NewsHour. “But I might take a buyout if the county offers one.”

The future will bring growing uncertainty for riverside and coastal communities, in Pollocksville and beyond. Epic rainfall and massive storm surge will only intensify with climate change. 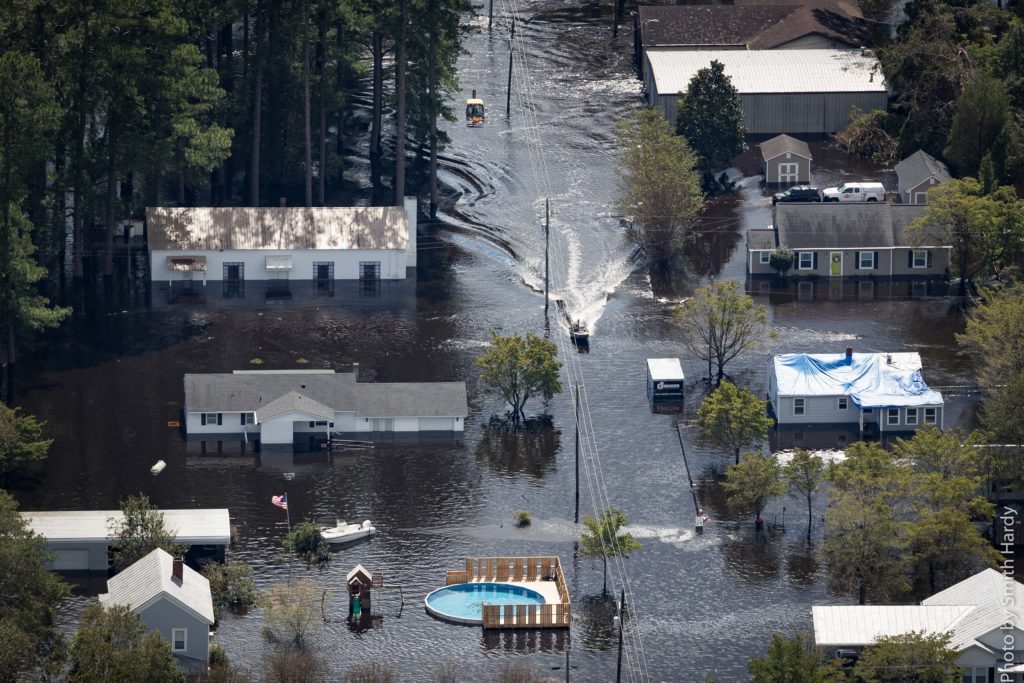 When Hurricane Florence hit the small working-class town of Pollocksville, about half of its homes and businesses sat underwater for several days. Some parts of town were covered by up to 20 feet of water. Photo by Smith Hardy

But there are other effects too, those that seem small now but may have lasting impact along the coast. Major storms can not only help spread waterborne infectious disease, but coastal hurricanes also leave behind toxic algal blooms, a silent but suffocating threat to water quality for weeks and months after storms pass.

Meanwhile, faced with persistent storm surges, North Carolina homeowners are fortifying their shorelines with artificial seawalls or bulkheads. But new research shows that these man-made structures may cause more damage than they prevent for landowners and the environment.

Here’s what we know about how hurricanes are changing coastal Carolina.

For the last 24 years, Hans Paerl has been a guardian for water quality along North Carolina’s coast.

As part of his duties as a marine scientist at the University of North Carolina-Chapel Hill, Paerl oversees two projects that monitor the Albemarle-Pamlico Sound system, which is the second largest estuary in the United States behind the Chesapeake Bay.

The “Pamlico” — as it’s known by locals — is a nexus where freshwater meets the ocean. More than 9,000 miles of rivers and streams, including Pollocksville’s Trent River, dump into this 30,000-square-mile watershed.

Over the last two decades, Paerl’s lab has tracked how 35 hurricanes influenced water quality in the Pamlico.

“Since the mid-90s, these storm events have increased both in frequency and also in severity,” Paerl said as we stood in his lab at the UNC Institute of Marine Sciences in Morehead City. “With all that rainfall, we’re obviously also getting a lot of nutrient discharge that’s coming out of the watersheds.” 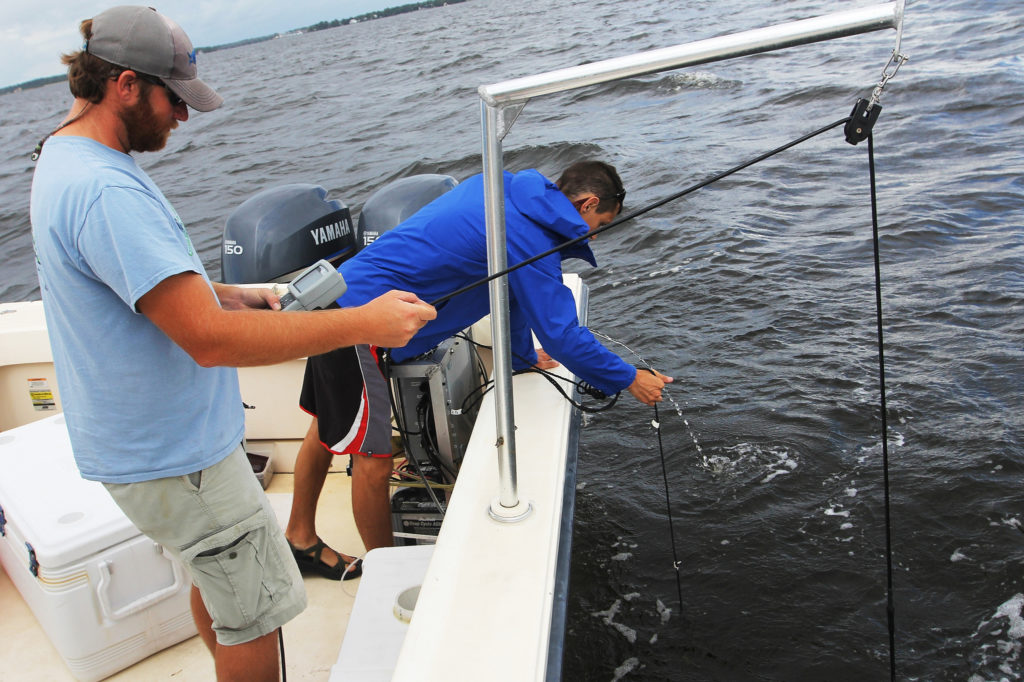 Paerl said these nutrients enter rivers and tumble into the Pamlico Sound like a cocktail into a martini glass. After Hurricane Matthew in 2016, Paerl’s team measured 30 percent more nitrogen and phosphorous — two nutrients associated with agriculture, stormwater and wastewater — along the North Carolina coast. After 1999’s Hurricane Floyd, nutrient levels were 60 percent higher than normal.

Pamlico estuaries are typically stratified or layered like oil on top of vinegar — runoff from freshwater rivers floats above the ocean water.

Normally, the upper freshwater layer of an estuary and its lower salty layer mix during the day thanks to upwellings and downwellings. But when storms like Hurricane Floyd or Florence enter the picture, they create swollen rivers that push salt water out of estuaries, Paerl said, leaving behind a giant pool of fresh water and nutrients, and hardening the barrier between the layers. This means that for weeks or months, the upper layers will remain a prime freshwater, nutrient-packed setting for algal blooms.

His team found that such an environment is great for freshwater algae like cyanobacteria (blue-green algae). The same organisms have swarmed Florida’s Lake Okeechobee and surrounding fresh waterways in the state for more than a year.

“The problem with cyanobacteria blooms is that they can produce toxins that can be dangerous to fish shellfish but also humans,” Paerl said. “They tend to form these massive paint-like scums on the surface.” 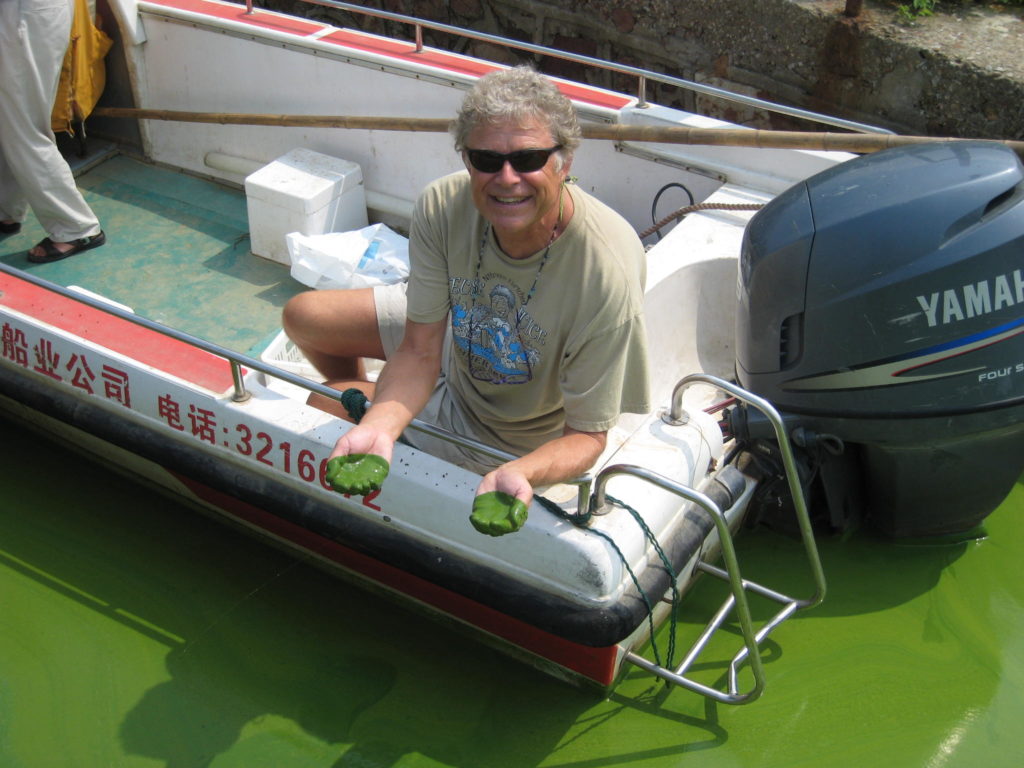 Hans Paerl has traveled all the way to China’s Lake Taihu to study aggressive cyanobacteria (blue-green algae) blooms. These blooms can produce toxins that cause cancer or liver problems, and nuerotoxins that can cause symptoms of Alzheimer’s. In other words, don’t try this at home. Photo by Hans Paerl

And while Hurricane Florence hit this autumn, Paerl expects the storm will cause toxic blooms once the waters warm during next spring and summer.

The danger doesn’t end there. When those blooms die and their remains sink to the bottom, they consume oxygen and choke organisms in bottom waters, Paerl said. These low-oxygen dead zones kill off oysters, clams, scallops, crabs and other types of shellfish that simply cannot flee.

If Hurricane Floyd serves as an omen for Florence, then the damage may have a lasting impact. Floyd caused $19 million in fishing losses and quadrupled the number of retirements among fishermen within two years. Chuck Weirich, a marine aquaculture specialist with North Carolina SeaGrant, told News & Observer that the state’s shellfisheries had lost around $5 million during the weeks after Hurricane Florence, which nearly surpasses what this industry earned in all of 2017.

As special correspondent Cat Wise reported for the NewsHour, a coastal drop in water quality can also mean an increase in human diseases, such as skin-infecting vibrio bacteria and stomach-churning salmonella. We visited one hospital on the coast that reported a seven-fold increase in salmonella after the storm.

Why sea walls might cost more than they save

For property owners, physical barriers — such as seawalls and bulkheads — seem a logical option for blocking these rising seas. North Carolina and federal officials claim that bulkheads can last up to 50 years, and last year, the U.S. Army Corps of Engineers relaxed restrictions on replacing natural shorelines with artificial structures. North Carolina has more than 10,000 miles of estuarine shoreline, and nearly 10 percent of it has already been fortified or modified in some way. But hurricanes appear to be changing the calculus on the usefulness of these so-called hardened shorelines.

Four years ago, marine scientist Carter Smith and her colleagues began conducting a survey in 16 of 20 coastal counties in North Carolina, wherein 700 homeowners explained the aesthetic desires and strategies behind their shoreline defenses. Respondents considered bulkheads to be the most durable option, and about 40 percent said they had installed these artificial walls to shield their homes.

When the team looked at how bulkheads actually performed during Hurricane Irene and Hurricane Arthur, they found about 95 percent of the visual damage along shorelines could be attributed to bulkheads. Smith said the bulkheads broke apart because they weren’t prepared for the storm surges created by these storms.

These shoreline structures are built to withstand wave forces coming from the ocean, said Smith, who works at the UNC Institute of Marine Sciences. If that water overtops the structure and reaches the landward side of the bulkhead, the water pressure will build until it pushes the wall into the sea.

“This suggests that bulkheads are being damaged quite a lot. They might not be as effective as homeowners think that they are,” Smith said. “And if you had to go back and rebuild your bulkhead after every single storm that’s going to be really expensive in the long-term. 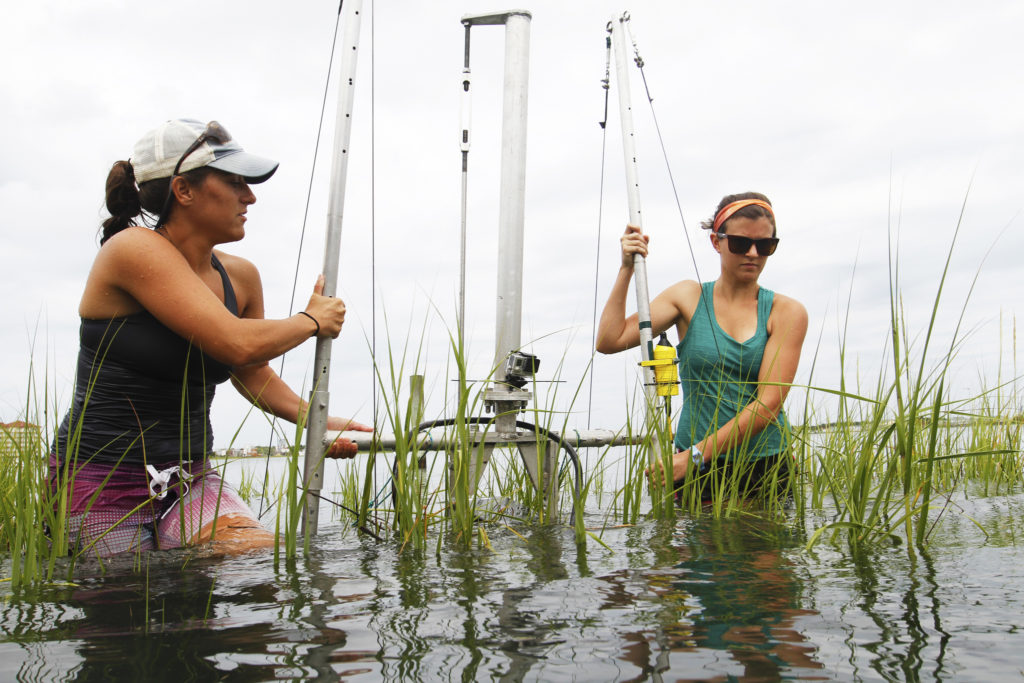 Meanwhile, living shorelines may offer more protection against stormy wave and erosion than people expect. Before and after Hurricane Matthew, Smith and her colleagues ventured to 12 locations spread across 125 miles of North Carolina coastline. They compared “living shorelines” — coast that has retained its natural elements like rock sill, plants, oyster reefs — versus hardened shorelines with bulkheads.

They found living shorelines performed just as well at preventing erosion before and after the storm as bulkheads.

The key difference: living shorelines “required absolutely no repair after the storm,” Smith said, “whereas three out of the four bulkheads that we surveyed in our study required some kind of repair.”

Smith said living and natural shorelines can be very resistant to hurricanes for a couple reasons. While a salt marsh might look like mosquito-filled wetland, its plants are custodians.

A bulkhead in North Carolina soon after Hurricane Matthew (left) was repaired (center), only to be damaged again by Hurricane Florence this year. Photo by Carter Smith

“You have an area that’s filled with hundreds of thousands of little stems. Each of those stems are actually offering resistance to the water and the waves when they’re coming in,” Smith said. Oyster reefs can behave similarly, creating offshore breakwaters that can also dissipate that wave energy.

It’s true that some types of natural shorelines could limit some things that you might want to do along your property. For instance, if you keep a natural oyster reef, it can create a hazard that might cut up the bottom of your feet or your kayak as you head out to play. “But for the most part you can put your docks out over natural habitats like you would a bulkhead,” Smith said.

Once a natural shoreline is transformed into a hardened shoreline, it cannot typically be undone, she added.

Whether we like it or not, our coasts are already changing for the worse. The Atlantic Seaboard and the Gulf Coast experienced the worst rates of sea-level rise in the world during the last century. Minor floods, which used to occur once every one to five years along America’s coasts, are now happening once every three months.

These floods will not only reshape low-lying metropolises like Miami but thousands of small communities who may be unaware and unprepared. Pollocksville washed away despite being inland, and the Hendersons — along with most of the town — were not considered part of a flood zone.

America will only be able to afford these climate disasters for so long. More than 130,000 North Carolinians have registered for disaster assistance because of Hurricane Florence. Even though the storm hit as a Category 1 storm, its three days of epic rainfall afflicted 1.2 million households — one of every three homes in North Carolina — to the tune of $5.6 billion in home damages. The state estimates that the storm caused $17 billion worth of destruction overall.

Many people, especially those in riverside towns that flooded, are stuck in limbo. They’re living in rental apartments while they decide what to do about their damaged homes.

Steven Thornton, of the volunteer search-and-rescue organization Geaux Rescue, remained behind in Pollocksville after the flood waters receded to help the town’s recovery.

“They still need help. There still are still over 100 families right here around the corner that can’t get in their houses — that have nowhere to live,” Thornton said. “You ride up and down the road and you see everything these people have ever worked for their entire lives, and it’s just sad.“

Left: Hurricanes and climate change are leaving behind a trail of harmful algal blooms in North Carolina. It is just one of the lasting legacies being created by intensifying storms along the Carolina coast. Photo by Dan Sears/UNC

The daunting task of identifying victims of the Camp Fire