These tiny satellites, equipped with ion thrusters, could change how we explore space

CubeSats, low-cost, bite-sized satellites inspired by the tubes used to hold Beanie Babies, were invented in 1999 as educational tools. Their creators — engineering professors Bob Twiggs and Jordi Puig-Suari — hoped building satellites the size and shape of Rubik’s Cubes would help students of all ages how to design and engineer efficiently.

Now, aerospace suppliers and governments across the globe see the tools as the future of space commercialization and deep space exploration. They want to turn CubeSats into tools for low Earth orbit activities like telecommunications and reconnaissance. Companies like SpaceX, Virgin Galactic, Boeing and Airbus, for instance, want to create a space internet — a network of thousands of CubeSats that provide high speed broadband to remote parts of the world.

And people like Paulo Lozano, director of the Space Propulsion Lab at the Massachusetts Institute of Technology, say sending the tiny satellites to asteroids could help improve space research (or even save the planet from an asteroid attack, he said).

“Instead of going to an asteroid every five, 10 years the traditional way, release a fleet of these tiny little CubeSats and visit 100 asteroids because it’s so cheap,” he said. “Because some of these asteroids, especially the very small ones, have the potential to collide with the Earth. Detecting them in time is important [for stopping them], but also knowing their composition.”

Over the first decade of the CubeSat era, universities dominated the landscape, sending two of every three devices into space. Today, commercial companies and militaries have taken over, launching 70 percent of CubeSats in the last five years.

But there’s still one big problem: CubeSats can’t move once they’re in space — which limits their survival to months or years and makes them dangerous.

A standard CubeSat is cube shape with sides measuring 100 millimeters (3.9 inches) long. But CubeSats can be combined into larger satellites. To date, the largest to reach space was 24 inches across or about the size of a computer printer. Photo by Matthew Ehrichs

“One of the big limitations in CubeSats is that they are launched as secondary payload. Once they are in space, they cannot move,” Lozano said.

Of the 750 or so CubeSats sent into space so far, almost all have lacked their own propulsion systems. The tiny satellites are transported alongside regular cargo, and then flung into space.

But without their own rockets, the CubeSats cannot maneuver on their own. Most fall slowly back to Earth, but some remain in orbit for years, where they join the other 100 million pieces of space debris that are at risk of colliding with other satellites and space stations.

The U.S. Air Force, whose Joint Space Operation Center monitors more than 23,000 orbiting objects larger than four inches in diameter, issues about 700,000 of these collision warnings to satellite owners per year. Imagine what would happen if thousands of CubeSats were added to the fray.

What CubeSats need to stay in space are mini boosters, and scientists like Lozano are racing to build them.

Lozano’s early work focused on big chemical rockets — the kind that you see strapped to space shuttles or on SpaceX missions. He knew these conventional rockets require huge fuel tanks — too big to be carried by CubeSats. Meanwhile, government standards limit how much chemical propellant can be carried by secondary cargo like CubeSats in order to prevent accidental explosions.

“You don’t have a lot of leeway in what you’re allowed to bring up because if your satellite blows up and you’re the secondary payload, the primary people are going to be really angry,” said Kristina Lemmer, a mechanical and aerospace engineer at Western Michigan University, who isn’t involved with Lozano’s research.

So, Lozano needed an alternative. His inspiration: static electricity and tiny drops of salt water. 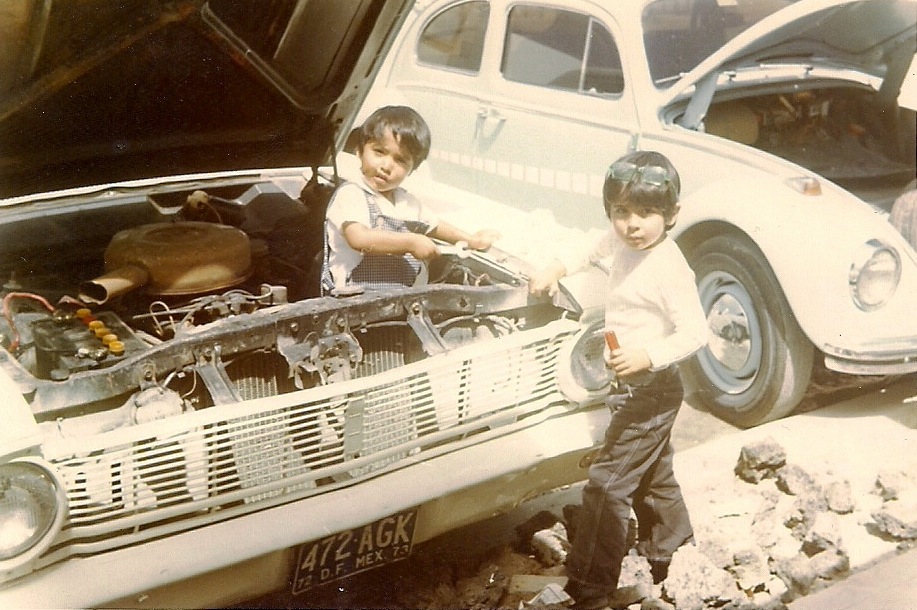 Paulo Lozano (left) grew up in Mexico, where he tinkered at an early age. His interest in space began with Carl Sagan’s “Cosmos” series and thanks to a telescope gifted by his parents. He built model airplanes and rocket launchers, which eventually led him to study chemical propulsion in graduate school at MIT. Photo courtesy of Paulo Lozano

Static electricity is caused by an imbalance between positive and negative charges in an object. Rub a balloon on your sweater, and its rubber surface becomes covered in negative charge (electrons). Place the balloon near your positively charged hair, and it tugs on the strands until you have a misshapen mohawk.

Lozano’s team designed a set of mini thrusters that rely on the same principle. The devices create an electric field that tugs on the charged particles in salt water until they peel off. The result is a spray made of charged molecules called ions.

This ion spray doesn’t create a lot force. It’s always less than a millinewton, which is akin to the force produced when a mosquito lands on your arm. But the spray moves very fast, and even a small action creates a reaction in the frictionless vacuum of outer space. Use this to move ions in one direction, and a CubeSat will move uber fast in the other.

By launching a fleet of CubeSats, scientists could learn the chemical compositions of asteroids, which could be the key to destroying or redirecting them.

The thrusters, which look like computer microchips, are the size of quarters. The chips contain a grid of 500 needles — each a custom-built nozzle for spewing ions. His team tests them inside a large vacuum chamber at their lab in Boston.

“In an ideal situation, all of the ions would have the same energy, but the physics of these ion beams makes it so that some ions have less energy than others,” said Catherine Miller, an MIT doctoral and NASA Space Technology Research Fellow. By studying how energy is distributed among the ion beams, she can calculate and standardize how each thruster will perform.

Only three propulsion boosters for CubeSats have had successfully demoed in space, Lemmer said. Lozano’s system was one of them, through a partnership with the Aerospace Corporation in 2015. But Lemmer, who published a comprehensive review of CubeSat propulsion systems last year, said Lozano’s ion engines stand out because each one can produce so much thrust.

Lozano’s tiny thrusters, which are the size of quarters, generate these ion sprays. Engineered like microchips, a single thruster contains a grid of 500 needles — each a solar powered, custom-built nozzle for spewing ions. Multiple thrusters can be packed onto a single CubeSat to allow for a variety of motions or extra propulsion. Photo by Matthew Ehrichs

“Dr. Lozano’s system is probably the frontrunner for the possibility for deep space missions,” Lemmer said. “In order to go interplanetary, you’re going to have to have an electric propulsion system because they are so much more efficient.”

Folks like NASA have counted on the high efficiency of ion engines in the past, such as with the Dawn mission to the asteroids Vesta and Ceres. That journey would have been impossible without the Dawn’s high velocity ion engine. But the Dawn mission cost half a billion dollars. Commercial CubeSats can cost as little as $100,000 — and this price is dropping. Even children are building CubeSats at their elementary schools.

While Lozano’s electrospray thrusters don’t work exactly like the Dawn’s ion engines, Lemmer said the advantages are the same. You can carry less propellant — Lozano’s fuel tanks are the size of sugar cubes — but move more efficiently.

With another demonstration scheduled in early 2018, Lozano is dreaming big. He hopes his tiny thrusters can help CubeSats reach Mars or send them on asteroid scouting voyages. “Since they are so small, you can actually land on the asteroid with these rockets and take off again,” Lozano said.

Though nobody over the last 1,000 years has died because of an asteroid strike, as far as anyone knows, the chances are still disturbing. Your odds of being killed by an asteroid in your lifetime — one in 700,000 — rival death by flood or earthquake in the U.S.

By launching a fleet of CubeSats, scientists could learn the chemical compositions of asteroids, which could be the key to destroying or redirecting them. An asteroid made of silicon, for instance, would be much tougher to stop than one made of iron. Lemmer said CubeSats with propulsion could also provide a cheaper way to test new space technologies.

“Right now, if you want to put a new technology on a NASA satellite, it’s years in the making to run sufficient tests,” Lemmer said. Instead, “if you launch a new technology on a CubeSat and show that it works in space without bad things happening, then you can more easily translate into a NASA mission down the road.”

Left: CubeSats -- low-cost, bite-sized satellites -- are considered the future of space exploration and commercialization. But there's a problem: CubeSats can't move. One MIT engineer has invented a solution, and to understand how it works, you'll need a few drops of water and a fuzzy sweater.