In the scurry to track, isolate and otherwise beat back the global coronavirus pandemic, testing people for traces of SARS-CoV-2, the virus that causes COVID-19, is a high priority. But a different type of test — looking for clues in the bloodstream that indicate the patient’s body has previously responded to a SARS-CoV-2 infection — offers the valuable insight of who might already be immune to the disease, even if only temporarily.

In the United States, health care providers are employing the first tactic – detecting actual virus in sick patients — largely using a method called polymerase chain reaction, or PCR. This laboratory testing technique sniffs out genetic material of the virus in a patient’s airways, collected in a swab or liquid sample.

The other type of test is called a serology test, which sifts through a patient’s blood to find antibodies to the SARS-CoV-2 virus. These aren’t as much about detecting whether you have COVID-19, but instead whether you’ve ever been exposed to it — which would deepen our understanding of who is getting sick, particularly people who are asymptomatic. It could also allow people whose bodies seem to have some degree of immunity to the illness to return to work more quickly.

“Imagine the value that could have in health care,” said Robin Patel, director of the Infectious Diseases Research Laboratory at the Mayo Clinic and the president of the American Society for Microbiology, “but, really, in many different fields as a return-to-work strategy where those individuals could resume normal activity.”

READ MORE: What is a ventilator and how does it help COVID-19 patients?

Serological testing is not usually used for acute respiratory infections like COVID-19 because it can delay a person’s access to treatment. It takes “between seven and 11 days to develop antibodies,” Patel said. The PCR test most people are receiving now returns results quickly, which lets patients receive more targeted care.

But if a PCR test is like a photo of a moment, then a serology test is like an entire photo album that could lead doctors through how a patient’s body responded after being infected with the virus.

The amount of time that a potential immunity to COVID-19 lasts is yet to be determined, but some evidence suggests likely provides some protection — a helpful piece of knowledge for both the general public and care providers as more people get sick.

“I’m a physician. I work with patients. I place, you know, breathing tubes in,” said Jack Jeng, an associate physician at UCSF and chief medical officer of ScanWell Health, which is trying to bring a rapid serology test to the U.S. market. “And that’s considered a high-risk procedure because it’s very high risk of transmission at that time. So if I knew that I had natural immunity to the disease, I may feel more comfortable being the one to volunteer to do these procedures as opposed to letting my colleague expose themselves.”

Dr. Deborah Birx, coordinator of the White House coronavirus response, said on April 2 that getting a serological test up and running is an important step, one that could be completed “within this month.” Birx called on universities and states to work on developing their own tests using antigens that are available online.

Much like with PCR tests, there are concerns about unequal distribution of these serological tests, with a patchwork system that often gives those with an economic edge more access to these scarce resources.

If deployed on a large scale, this testing would also give us a better sense of the prevalence and fatality rate of the disease, since it could identify who had the virus even if they had mild or no symptoms at the time. So far, the scope of these “silent carriers” is largely unknown.

On top of all that, the blood – or, really, the blood plasma – of people who have convalesced, or recovered, from COVID-19 could be collected and reinjected into others for use as a temporary antiviral treatment. On March 24, the FDA approved “convalescent plasma for use in patients with serious or immediately life-threatening COVID-19 infections.”

In cities like Houston, New York City and Seattle, plasma is already starting to be collected for this use.

“Identifying the individuals who have been previously infected, who have those neutralizing antibodies, is another use of serologic testing,” Patel said.

Who already has this kind of test?

A few countries – notably Singapore and China – already have some serological testing, and are expanding its use for tracking immunity. But for other countries on the upswing of the outbreak curve, this kind of testing was just not a priority.

“The emphasis, appropriately so, was on developing the test for acute infection,” Patel said, referring to the PCR test. “But as time has gone on, you can see that this is not ending tomorrow. We need additional tools and we believe that antibody detection can be useful.”

In the U.S., the situation with serological testing rollout is mirroring the creaky PCR test saga: The CDC is still working on its own serology test while research labs and companies are racing to get their own out there. On April 1, the FDA approved the first commercial serological test in the U.S., created by North Carolina-based company Cellex.

The serological test that Scanwell Health is bringing to the U.S. is one manufactured by the Chinese company INNOVITA. With a finger prick of blood, you can know if you have or have not been infected with the virus in 15 minutes. 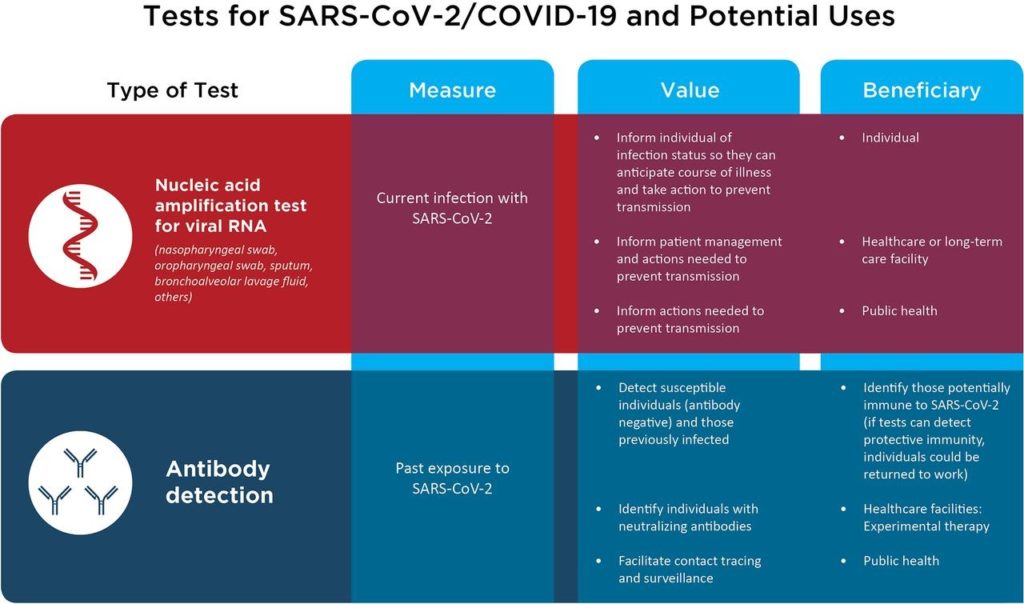 INNOVITA has been able to distribute millions of its serological tests with China, Jeng said, but issues are arising. Manufacturers in China are producing 500,000 tests per day, Jeng said, but travel restrictions and closures between the U.S. and China have complicated the delivery of tests.

“Trying to get the tests to the U.S. has been the bottleneck,” Jeng said. “There just aren’t many flights leaving Beijing. So we’re trying to figure out, how can we get these tests imported into the U.S. quickly so we can start validating?”

More than 70 test developers have told the FDA they are looking to bring commercial serological tests to the U.S., according to an April 7 statement from the agency. But the agency also warned that some firms were misrepresenting their products as having FDA approval, adding it would take action against companies making those kinds of claims in their marketing materials.

To roll out wider at-home testing will require a rigorous approval process that could take over six weeks. (Scanwell Health has previously brought to market an FDA-approved, at-home UTI test.)

Eventually, Jeng hopes Scanwell Health, with help from telemedicine provider Lemonaid, will be able to send out box kits to households for roughly $70. This cost will be paid by the consumer at first, but Jeng hopes insurance will eventually cover the expense. Users will be guided through the process and results via a smartphone app and telemedicine consultation.

Though the FDA has not approved any at-home COVID-19 tests yet, testing at home — through this method or the other methods researchers are pursuing right now — could help keep people safely isolated and make social distancing easier to maintain, which in turn could save lives.

Validation by the FDA is incredibly important, but an already complex process of making a new serological test is made even more complicated by the fast, dynamic nature of this outbreak.

“It is an evolving area,” Patel said. “We’ve been figuring this out as we go.”

Left: File photo of scientist Linqi Zhang shows a tube with a solution containing COVID-19 antibodies in his lab where he works on research into novel coronavirus disease (COVID-19) antibodies for possible use in a drug at Tsinghua University's Research Center for Public Health in Beijing on March 30, 2020. REUTERS/Thomas Peter