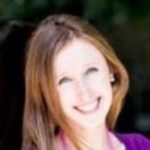 Unfortunately, almost every individual in the world will experience at least one traumatic event, such as a car crash, assault, exposure to war combat or a natural disaster during their lifetime. Many will endure more than one.

Although the majority of individuals recover from a traumatic incident, a substantial proportion will develop chronic problems, including post-traumatic stress symptoms, depression and chronic pain.

Chronic pain? Isn’t pain caused by nerve injury? Well, not always. Chronic pain can develop and is quite common following trauma exposure. This fact might surprise you given the fact that many traumas involve very little or no tissue damage.

I am a geneticist and molecular biologist studying predictors and mediators of chronic pain and other chronic neuropsychiatric conditions that develop following a traumatic experience. I am particularly interested in understanding the biological reasons why some individuals are more vulnerable to chronic pain than others.

Towards that end, based on previous findings from our group and other groups, my colleagues and I hypothesized that individual genetic variation affects who develops pain, and who recovers following trauma exposure. To test this hypothesis, our group at the Institute for Trauma Recovery, led by Dr. Samuel McLean, enrolled individuals in a longitudinal study of European and African-Americans who had been involved in a traumatic motor vehicle accident. We collected blood samples from over 1,500 such individuals and assessed their DNA and their pain levels six weeks following the car crash.

Before I go into details about our most recent study, let’s brainstorm how chronic pain might develop following trauma. This is an important question because if we know how pain develops, we can find treatments that prevent its onset.

Cortisol is a critical link between trauma and chronic pain.

And by preventing the onset of chronic pain, we completely alleviate the need to use those addictive and potentially deadly opioids you might have heard about.

Exposure to traumatic events causes your stress system to activate. This stress system sends signals between your hypothalamus in the brain, your pituitary gland and your adrenal gland, and ultimately results in the release of cortisol, commonly known as the “stress hormone.”

Cortisol is a critical link between trauma and chronic pain. This is because cortisol and another stress hormone called adrenaline have been shown to directly sensitize peripheral nerves – giving it the ability to signal pain in the absence of nerve injury. For this reason, it is vital for our bodies to carefully regulate cortisol levels, and to quickly and effectively resolve the stress response.

Fortunately all of our bodies have natural regulators of blood cortisol levels. Typically, a protein called the glucocorticoid receptor (GR) binds to cortisol that has been released after stress exposure and causes cells to alter activities of the immune system and brain. But another protein called FKBP5 can also manipulate cortisol levels by binding GR and preventing it from binding cortisol.

If FKBP5 levels are high, it sequesters the GR and prevents the GR from binding and lowering blood cortisol levels. Consequently, levels of cortisol in the blood can rise and potentially cause harm by binding nerve endings and causing pain sensations. Previous studies have shown that a person’s genes can influence relative levels of these proteins. 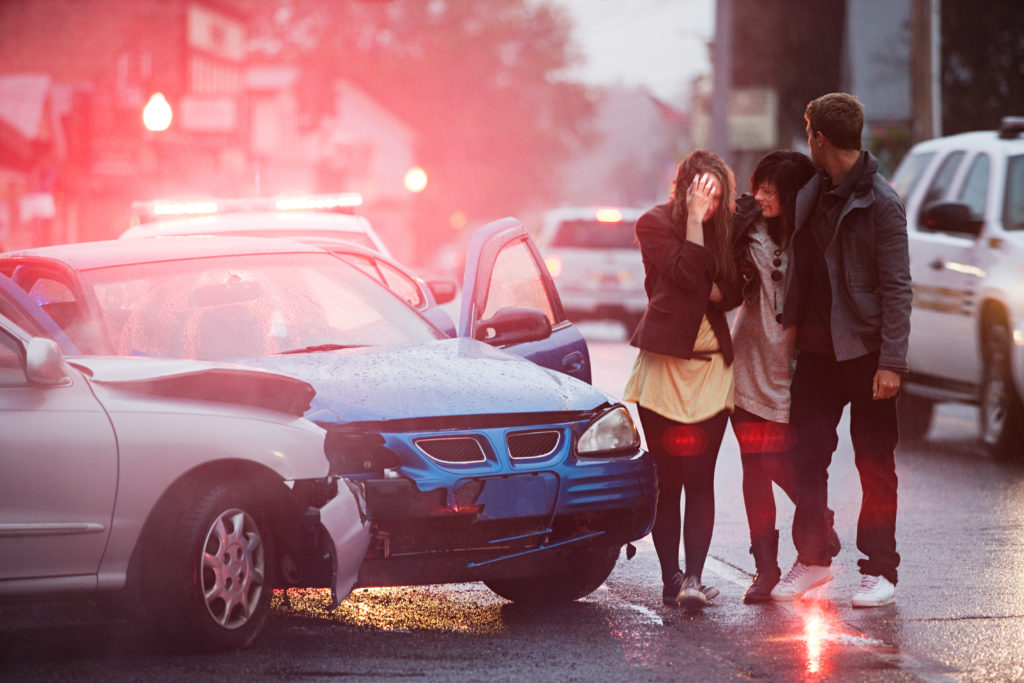 Even when an individual is physically unharmed after a car crash, the traumatic event can still cause chronic pain. Photo by Image Source/via Getty Images

Based on this knowledge, we hypothesized that the ability of FKBP5 to regulate cortisol and potentially affect pain levels might originate in our DNA. We tested this hypothesis using data from our cohort of individuals enrolled following motor vehicle collision. Importantly, these individuals who experienced trauma did not have bone fractures or tissue injury.

We chose motor vehicle collision as our trauma exposure because it is common and highly traumatic, and allows us to capture data in the immediate aftermath of the traumatic incident. Physicians in emergency departments across the country helped us enroll individuals and collect blood from them so that we could measure DNA, RNA, microRNA and hormone levels. This was important because for this study we wanted to understand how all of these types of molecules are related and how their composition can vary from one individual to the next.

How much pain you experience depends on your genes 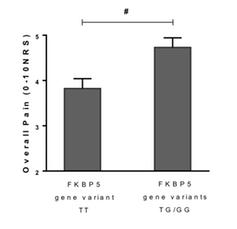 In our recent study, we discovered that which genetic variant of the FKBP5 gene a person carries is predictive of how much post-traumatic chronic pain an individual will experience following motor vehicle collision.

Our genetic analyses revealed that in both African-American and European-American individuals who carry at least one copy of the less common variants, FKBP5-TG or FKBP5-GG, experienced more pain than the individuals carrying only the more common FKBP5-TT variant. (Remember, we all have two copies of every chromosome and this is why we can carry two different versions or variants of the same gene).

We then wanted to know how these variations affect the stress response and subsequent chronic pain.

At this point we knew that individuals who have the less common variants, FKBP5-TG or FKBP5-GG are more likely to experience pain following trauma exposure. We then predicted that in these individuals with higher pain, FKBP5 regulation of cortisol would be abnormal. Therefore, we measured cortisol in these individuals and indeed found that their cortisol levels were higher with respect to FKBP5 levels when compared to individuals carrying the FKBP5-TT who have less pain. 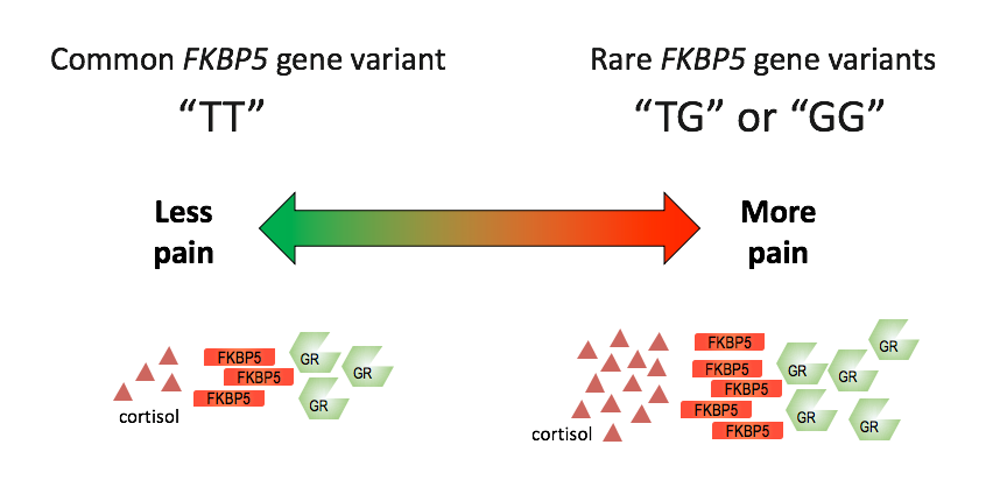 The common TT gene variant causes less cortisol to build up in the blood leading to less pain. The rare TG and GG variants cause cortisol levels to surge and can trigger chronic pain. Image by Sarah Linnstaedt, CC BY

Overall this recent discovery from our group is important because it suggests a way that humans can develop chronic pain following trauma exposure without experiencing tissue injury. It also highlights an important gene involved in the development of post-traumatic chronic pain that could be a promising new target for drug therapies. And it proposes a mechanism through which this important gene is naturally regulated.

This last point can help us in our quest to discover specific types of therapeutics because, for instance, if we didn’t want to try to target FKBP5 directly, we could mimic the action of this naturally occurring regulatory mechanism. Additionally, our work suggests that with such a potential therapeutic, we’d only need to treat individuals with the DNA variant that causes more pain.

Above: More than 100 million American suffer from chronic pain – in which pain signals continue in the nervous system for weeks, months, or even years. Illustration by leremy/via Adobe

Sarah Linnstaedt is an assistant professor of anesthesiology at the University of North Carolina at Chapel Hill. Sarah Linnstaedt receives funding from the National Institute of Arthritis, Musculoskeletal, and Skin Diseases (K01AR071504), the Mayday Fund and previously received funding from the American Pain Society (Future Leaders in Pain Grant). None of these funding agencies had any role in conduct of the study.

A festering opioid crisis, worn-out families and ‘so much pain to process’