Over the course of the last four decades, obesity worldwide has nearly tripled. Health conditions associated with obesity and high body mass index, like diabetes, heart disease, stroke and some cancers are among the top causes of death in the U.S.

Meanwhile, advertisers, medical professionals, hiring managers and even overweight and obese people themselves stigmatize the condition, often leading to discrimination in all arenas of life — health care, the workplace, in public or at home.

That discrimination, some studies say, is because many people believe obesity is self-caused. Yet researchers have known for years that obesity is at least in part a heritable condition.

Now the contribution of genetics just got much clearer, with a new study that can predict a person’s genetic risk of obesity from birth onwards.

This analysis of the heritability of obesity could lower stigma by making it clear that weight gain is not the result of laziness, poor choices or a lack of willpower.

The report shows that inside a person’s genome, more than 2 million variations contribute to a “scorecard” that can quantify a person’s potential to become obese. Although the researchers don’t know what each variation does, or how each mutation interacts with another, the team was able to identify a nearly 30-pound difference between people with the highest scores and the lowest.

The study, published Thursday in Cell, could help medical professionals intervene early in the lives of patients who are at high risk of obesity, said Amit V. Khera, a physician and human geneticist at the Broad Institute who led the project.

“DNA is not destiny,” Khera said, but if clinicians could teach healthy eating and exercise patterns to susceptible people who are not yet obese, they could potentially prevent associated conditions, heading off diabetes or heart disease in those patients as they age.

On top of that, Khera added, this analysis of the heritability of obesity could lower stigma by making it clear that weight gain is not the result of laziness, poor choices or a lack of willpower.

The team relied on genome-wide association study, or GWAS, which scans the genomes of batches of people in order to see if any physical traits among those subjects correspond to particular genetic patterns.

In this case, the analysis used a previous GWAS to understand the relative importance among more than 2 million genetic variants that had been previously associated with obesity. The study they chose sampled the genes mainly in people of European descent. 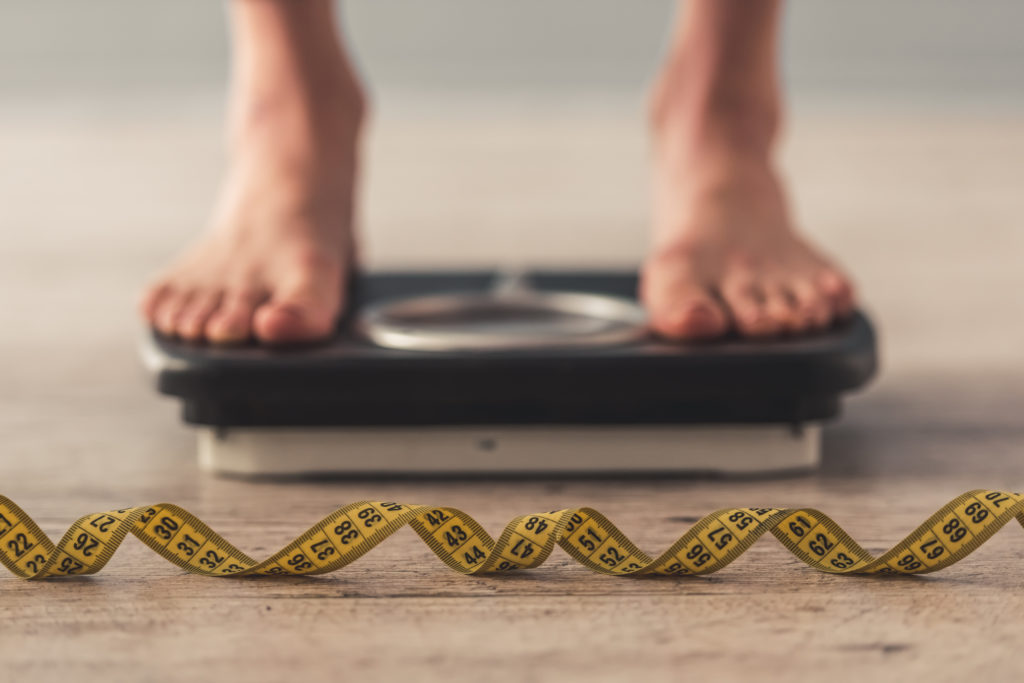 “On average, we’re getting heavier and heavier, and that’s a trend happening across the world,” Khera said. ”We’re about 20-30 pounds heavier than we were just a generation ago.” Image by Vadim Guzhva via Adobe

Then they developed an algorithm that could look at an individual person’s DNA, take into account the presence or absence of any of those genetic variations, and spit out a score quantifying that person’s risk of developing obesity.

Testing their algorithms against a database of 119,951 middle-aged people in the United Kingdom, Khera and his team found that their method could predict whether a person would become obese or overweight much more accurately than previous studies, which used at most a few hundred genetic variants to generate predictions.

The researchers then went on to test this algorithm on a new set of patients — more than 300,000 people mostly from the United Kingdom and the Boston area, whose genes and measurements were available for comparison.

You can overcome your genetics but some people have to work a little harder than everyone else to maintain a normal weight.

In middle-aged people, those who had the highest scores weighed an average of almost 30 pounds more than those with the lowest genetic risk. The high-scoring participants were 25 times as likely to develop severe obesity as low-scoring people, and their odds of diabetes, high blood pressure, heart disease, stroke and venous thromboembolism (a dangerous blood clot condition) increased as well.

That doesn’t mean that every person in the highest-risk group was obese, or even overweight. Eighty-three percent of the people whose scores were in the top 10th did carry excess weight, but 17 percent had a body mass index within the normal range and another 0.2 percent were actually underweight.

“You can overcome your genetics,” Khera said, “but some people have to work a little harder than everyone else to maintain a normal weight.”

The idea would be to encourage high-risk individuals to behave like those who evaded the weight gain that their genes predicted.

For now, the researchers propose early intervention. According to the study, weight gain in children with high genetic risk became apparent around age 3. Since a person’s genetic risk of obesity could be known from birth, education about healthy diet and exercise could head off weight gain before it begins.

Based on their study, Khera said the genetic contribution toward obesity has stayed more or less the same from generation to generation. It is people’s diets and the environment, such more advertisements for salty, sugary and fatty foods and less access to healthy food, that have changed over time.

Some researchers caution against overinterpretation of the study’s results.

Geneticist Scott Williams of Case Western Reserve University, who was not involved in this study, pointed out that knowing that a genetic variant — or 2 million of them — is associated with weight gain is not actually enough to know how it works.

That mechanism, the reason why a particular variant or combination of variants prompts a person to gain weight, could be anything from the person’s level of satisfaction after eating a meal to their ability to digest particular kinds of sugars.

“If you don’t know what [the genes] are doing, it’s kind of hard to plan out a course of action,” Williams said.

A blanket statement that people identified as high risk should eat better and exercise more isn’t likely to be particularly helpful without more targeted interventions. Physicians, he said, need to address the underlying chemical and physical changes causing weight gain in some people and not others.

Williams also pointed out that the results only apply to the population studied by the researcher’s chosen GWAS. Genetic research has historically had a white bias, which has influenced people’s health and their health care.

The genetic markers indicating high or low risk of obesity might not be the same in Asian or African populations, for example, and giving medical advice to those groups based on this data could be dangerous.

“We have no clue how these metrics that they’ve developed in this population will translate to any other population,” Williams said.

What it means for the future of medical care

The test involved in calculating a person’s risk of obesity costs just $50, according to the study. Khera and the team envision this kind of test as part of a widespread, easily available assessment of an individual at birth.

That raises the possibility of changing the stigma surrounding obesity forever, said Sean Phelan, a health services researcher at the Mayo Clinic who was not involved in this study.

In their minds, providers put obesity “in the ‘people cause their own problems’ camp,” Phelan said.

According to his research, physicians and medical professionals who view a patient’s condition as their own fault are likely to be less supportive, less warm and less effective at finding real solutions for those patients.

It gets more complicated, though. Children and parents who are told early on that a child is at high risk for obesity could run another risk — that the child’s relationship to food and weight might be colored by what they’ve been told about their genes.

“Where we are right now in 2019 is that scientifically, we can confirm that it’s possible to do this genome interpretation,” Khera said. “But the next step is really important — how and when do we explain this risk to patients and their physicians? That’s something that as a field we’re wrestling with right now.”

Left: Obesity is a growing global health concern. A new genetic test could help people identify their risk of developing obesity. Image by 9dreamstudio via Adobe

How drones are delivering lifesaving medical supplies in Rwanda