Walrus beaching in Alaska might not be as harmful as it looks. Here’s why

At this moment, thousands of Pacific walrus are diving to the seafloor in the shallow Chukchi Sea north of Alaska, using their whiskers to sweep for clams, snails and worms.

But if they want to rest from foraging and find that warming temperatures have melted their rafts of sea ice, they may be forced to find land, often about 120 miles south to a small barrier island at the Native Alaskan village of Point Lay.

This has happened every year since 2007. If the sea ice melts past the continental shelf into waters that are too deep to forage, as many as 35,000 of them will slosh onto a small strip of beach on the northeastern Alaskan coast.

“Who knows what goes through their walrus minds?” said U.S. Geological Survey Wildlife Biologist Anthony Fischbach. “There’s 50 miles of beach to the north and south of you, why do you have to be right there? You’re going to get squished!” 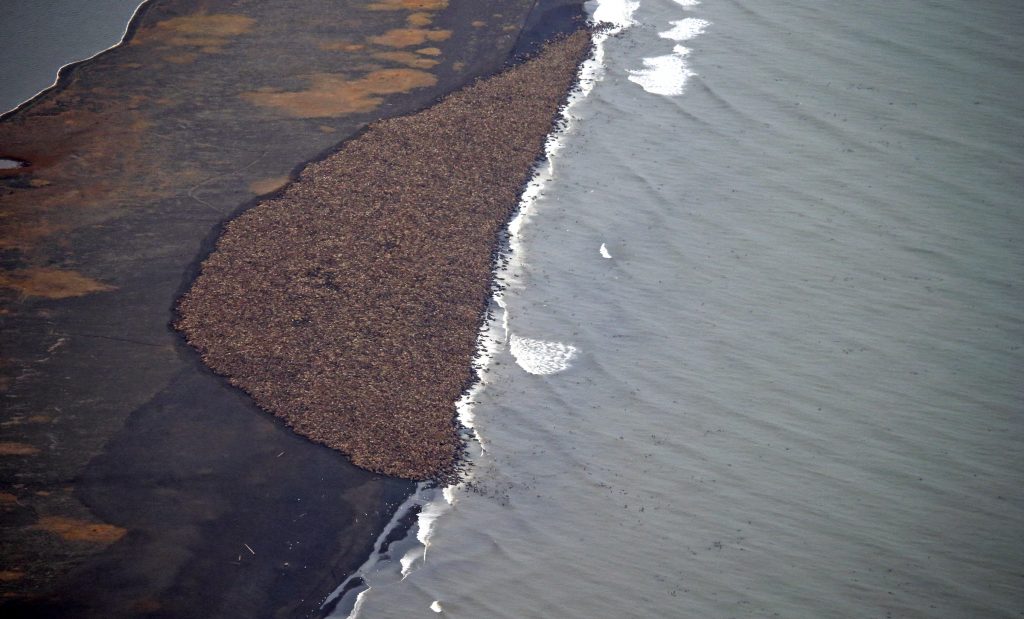 An estimated 35,000 walruses are pictured are pictured hauled out on a beach near the village of Point Lay, Alaska, 700 miles northwest of Anchorage, in September 2014. Photo by Corey Accardo/NOAA/NMFS/AFSC/NMML/Handout via Reuters

Fossil fuel burning and deforestation have pushed global temperatures up by nearly 2°F since the 1800s. The arctic is warming faster than anywhere else, causing sea ice that the mammals rely on to wither. So the images of the walrus at Point Lay are depicted by locals and scientists as a devastating effect of climate change.

And many scientists in Alaska are trying to figure out whether this recent shift from ice to land in the U.S. is a significant threat to the species or the Native Alaskans who rely on them for food and subsistence. While they all agree that climate change is a problem, they also say that history shows that walrus and humans are resilient.

“So much media attention goes to Point Lay,” said Fischbach. “But there are all these other places that they come to shore.”

Pacific walrus live along the broad and shallow continental shelves of the Bering and Chukchi seas, which extend between the U.S. and the Russian Federation. Fischbach and his colleagues combed through published reports, state records and observations from coastal residents, aviators and scientists in these regions.

They built a database showing where walrus have stopped on land in the past 160 years. It shows that seven regions in the last four decades recorded coastal haul outs that were bigger than 10,000 walrus, including Point Lay. 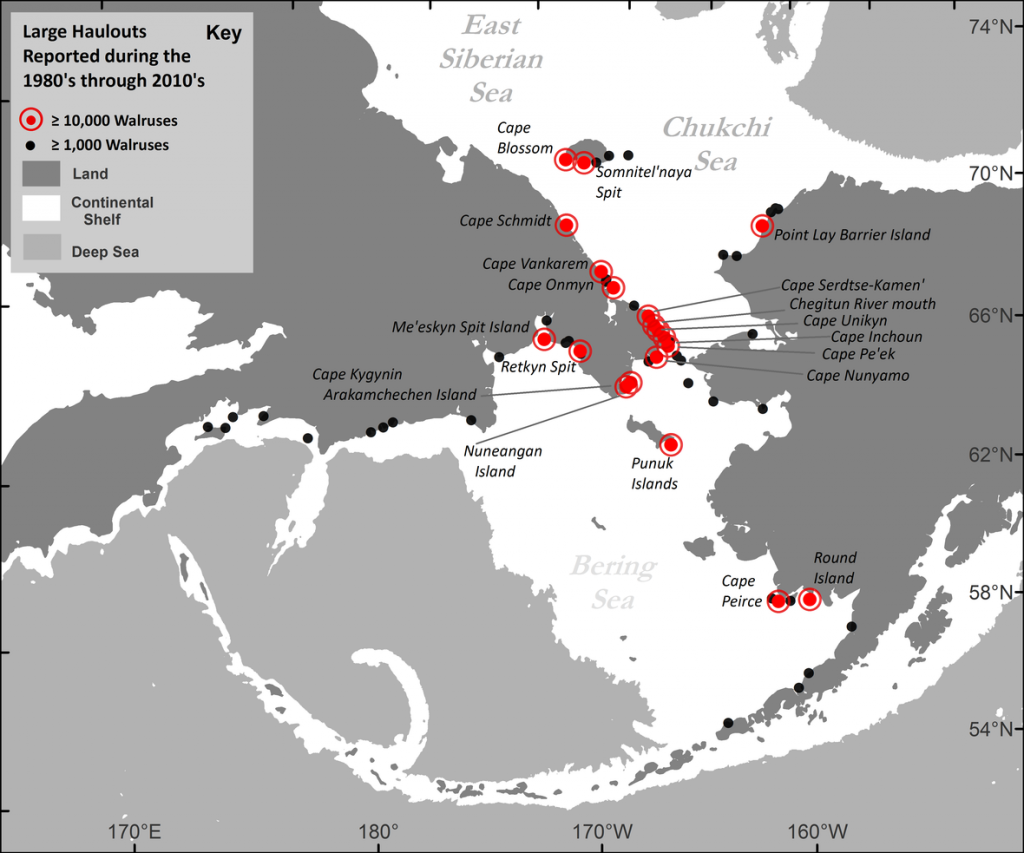 Map showing Pacific walrus coastal haul out locations reported in the past four decades (1980s– 2010s), with a maximum aggregation size of greater than or equal to 1,000 walruses. Photo courtesy of the U.S. Geological Survey.

Fischbach explained that these rest stops on land are not novel, but they haven’t always happened in the U.S. nor have they always been so large, which is why people here are concerned.

“It’s just a reminder that walrus choose their geography and they may be responding to things for which we don’t have good measures,” he said.

The database is supposed to help federal officials with conservation, especially as more ships start sailing through the newly open waters. The U.S. Fish and Wildlife Service is determining whether walrus should be listed as a threatened species. 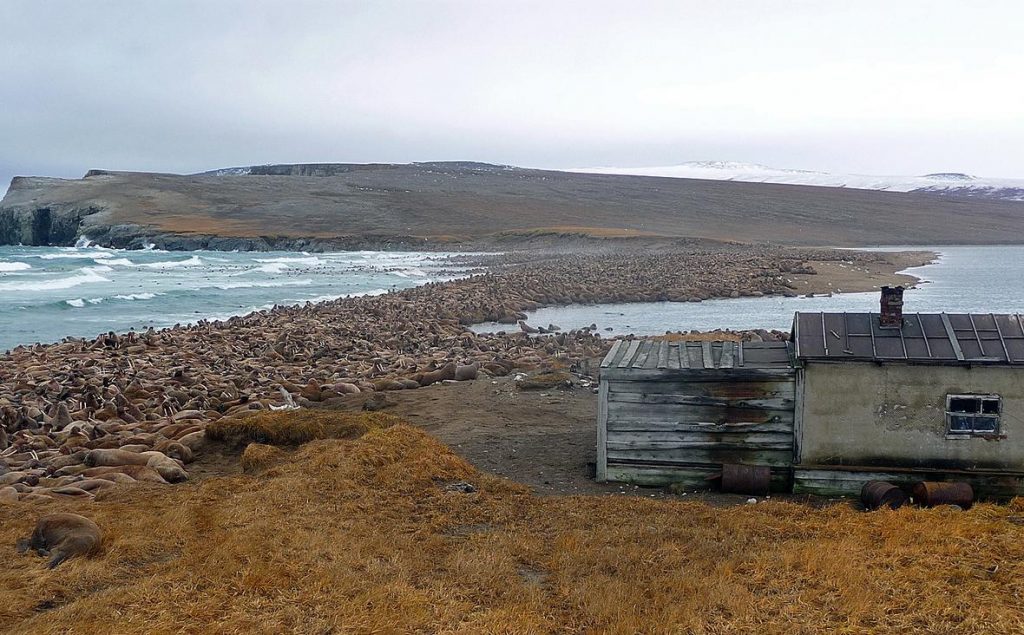 Cape Serdtse­Kamen’ has been reported as a walrus haul-out since the 1920. Up until 1990 it was used by walruses irregularly, only in autumn of years when sea ice was absent. Sporadic Aerial surveys have reported no more than 12 thousand walruses here from 1960 through 1990. Photo by Anatoly Kochnev/Mammals Ecology Lab Institute of Biological Problems of the North Far East Branch, Russian, courtesy of the U.S. Geological Survey.

“If they’re more frequently going to be on shore with their young and with the increased human activity in those waters, the risk of a disturbance is increased,” said Fish and Wildlife spokeswoman Andrea Medeiros.

More ships create a bigger risk of oil spills. In addition, if a walrus gets spooked when it is packed tightly on land, it can start a stampede. Sometimes, after they leave their summer rest stops, biologists find more than 100 carcasses left on the beach.

“This really pales to what we’ve seen on the Russian side,” said Fischbach. “Sometimes they see as many as 3,000 carcasses.”

But it’s not just the animals that may be at risk. Native Alaskans along the coast, who are also on the front lines of climate change, rely on walrus for food. They also use their tusks, bones and hides to maintain their subsistence lifestyle.

This is, in part, why the University of Fairbanks in Alaska is also collecting historical data, consisting bone samples and oral histories from Native elders to try to figure out how they adapted in the past. 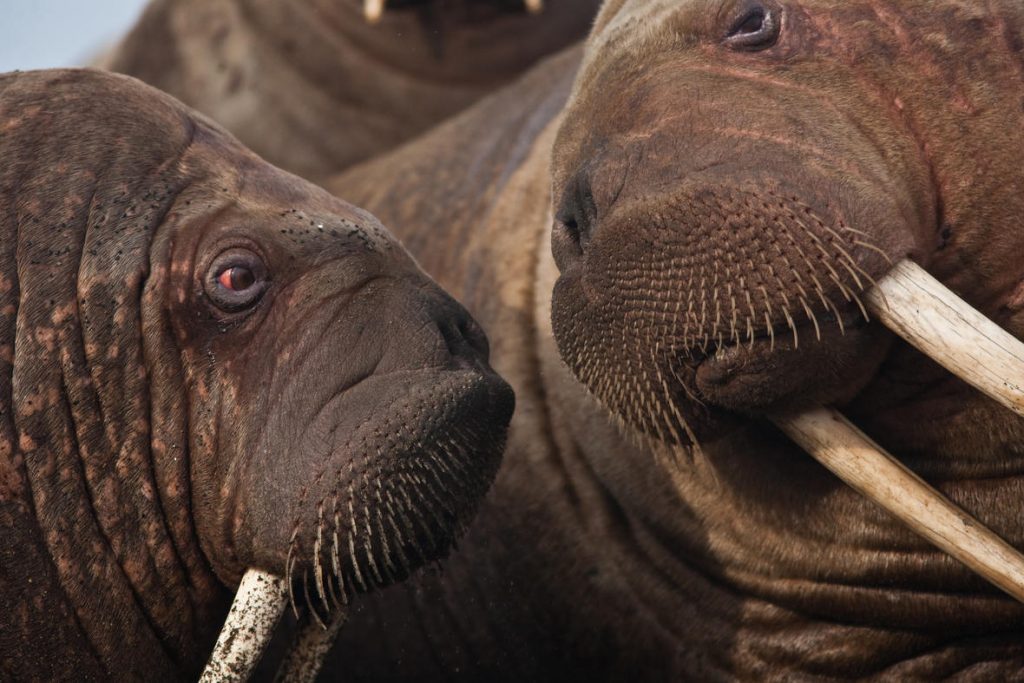 Two Pacific walruses look at each other. Photo Courtesy of the U.S. Geological Survey

Researchers at the university are testing DNA, stable isotopes and stress hormone levels from samples of ancient walrus bones – some that date back as many as 2,000 years.

Nicole Misarti, one of the principal investigators, said that walrus have already endured significant climate changes, such as the Medieval Warm Period more than 500 years ago.

“Was there a population bottleneck? Was there a loss of population due to a loss of sea ice? We’re hoping to try to trace that,” Misarti said. “We have pretty much figured out that walrus have survived…We want to know how.” 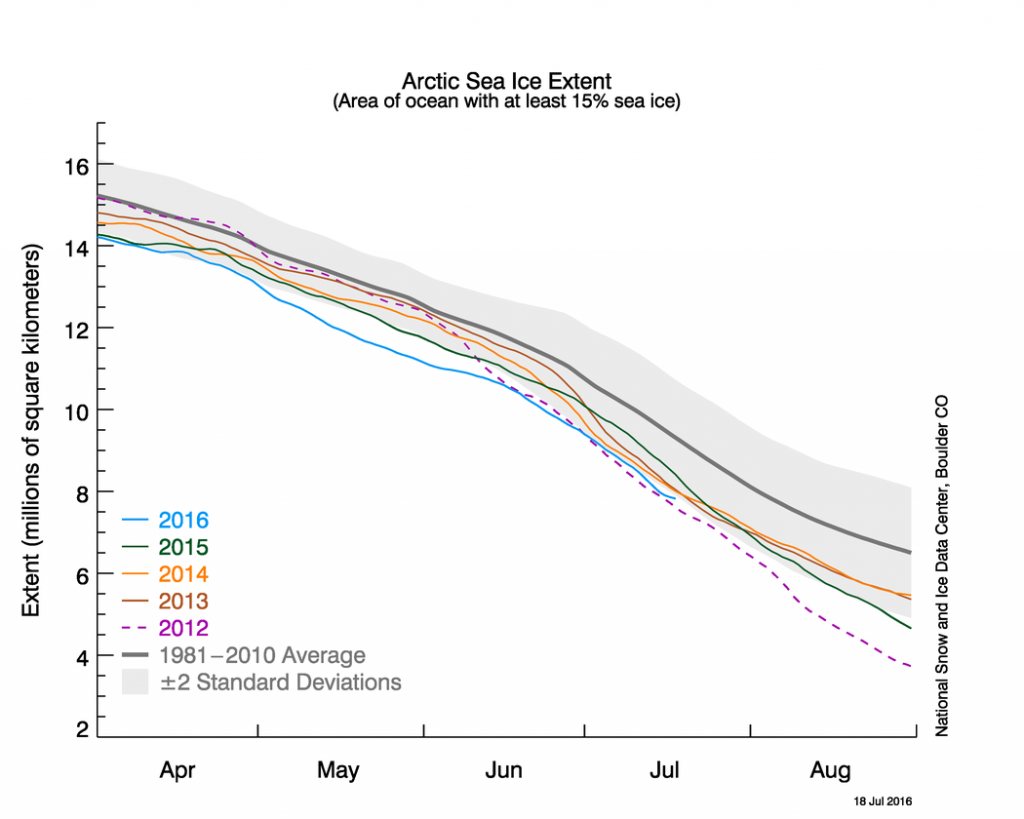 With a $1.7 million grant from the National Science Foundation, the four-year project is in its third year and will use oral histories from elders to see if its scientific findings match to what natives have seen.

“The takeaway is that walrus and humans are very adaptable,” said Misarti. “What we need to do is figure out maybe how we can best help them and the humans adapt to the change that’s coming along.”

Meanwhile, Medeiros says Fish and Wildlife is focusing on the present, with plans to enforce the Marine Mammal Protection Act at Point Lay if humans get too close and scare them.

“A human-induced stampede, that’s something we could potentially prevent,” she said.

Left: Walrus rest on a piece of ice in the Chukchi Sea. Photo courtesy of the U.S. Geological Survey.