WATCH: How and when to see the ‘ring of fire’ solar eclipse

For lucky skygazers in parts of the United States, the early hours of Thursday, June 10 will be the best chance to witness a solar eclipse in 2021. (If you’ve got an old pair of eclipse-viewing glasses, start searching the closet for them now, or read on for safe-viewing tips.)

Watch the livestream beginning starting at 5:00 a.m. EST in the player above. Sunrise begins at 5:47 a.m. EDT.

During eclipses, the moon moves between our planet and the sun, blocking some or all of its light.

What section of the sun is blocked depends on your vantage point. For much of the eastern half of North America, a partial eclipse will be visible on Thursday between about 5 and 6:30 a.m, turning the sun into a kind of crescent at dawn. Viewers in parts of Canada, Russia and Greenland will enjoy a particularly striking show. From their angle, the moon will align with the sun. But because the moon will be near its farthest point from earth, it will appear too small to block out the whole sun.

When the two briefly layer on top of one another, a bright “ring of fire” will appear to burn along the perimeter of the moon where the sun shines through.

On June 10, a solar eclipse will be visible in parts of the northern hemisphere. ☀️🌗🌎 This is an annular eclipse, meaning the Sun will never be completely covered by the Moon.

The farther north you are in the U.S., the better your view of the partial eclipse will be. It’s important to remember never to look directly at the sun without eye protection that’s specifically designed to allow for safe skygazing. But if you can’t get a hold of that gear, you have other options.

Two pieces of paper or cardboard and a pin are all you need to set up your own “projector” that will allow you to safely, indirectly view the partial eclipse. You can find instructions on timeanddate.com.

A total solar eclipse will take place on December 4, 2021. But that phenomenon will be visible only in Antarctica, and partially so in South Africa and the South Atlantic, according to NASA. So amateur astronomers in the U.S. who are determined to watch an eclipse this year should do their best to find an unobstructed patch of eastern sky early Thursday, and cross their fingers for a cloudless morning.

Use this timetable to find ideal eclipse viewing times in your area, courtesy of Space.com. 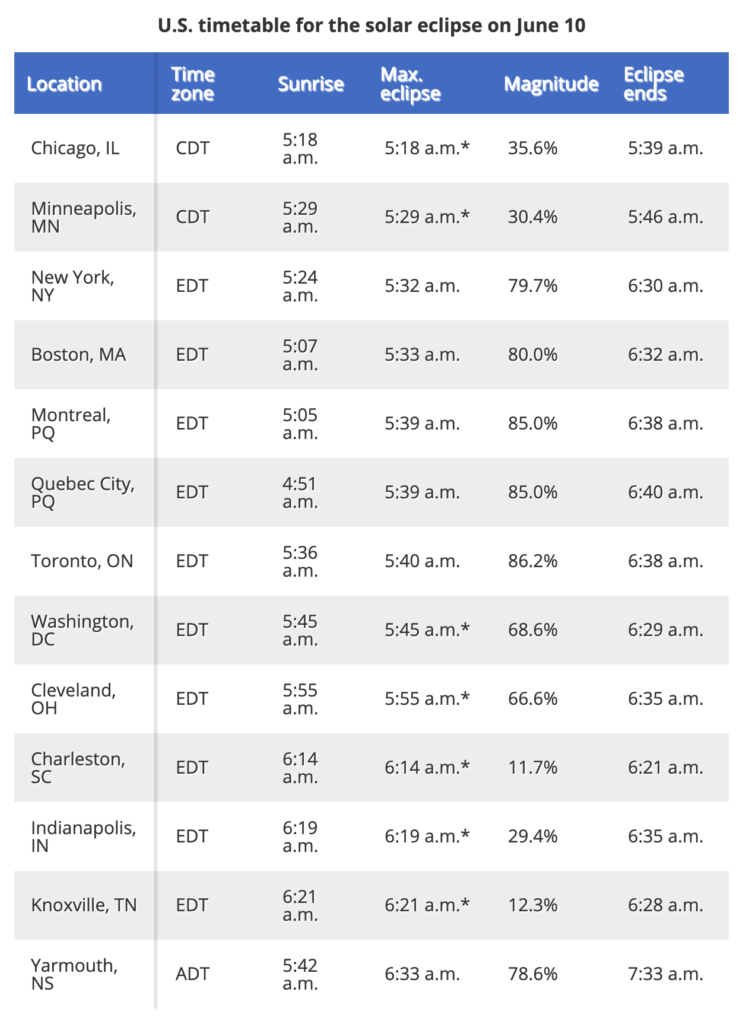 This solar eclipse timetable provides viewing prospects for various cities in the U.S. and around the world. If the moment of maximum eclipse happens before sunrise, the eclipse magnitude — the percent of the sun that is covered by the moon — is denoted with an asterisk (*). Graphic and caption courtesy of Space.com