NASA’s Perseverance rover launched from Cape Canaveral at 7:50 a.m. ET on Thursday, kicking off its nearly seven month journey to Mars. The mission is the nation’s first that is dedicated to astrobiology, or the search for evidence of ancient life on another planet.

Watch the launch in the player above.

Once Perseverance lands in Mars’ Jezero Crater — a former lakebed into which a river once flowed — the rover will use its drill to collect rock and soil samples from the surface of the planet. Those samples will eventually be stored at a carefully chosen location on Mars for a future mission to retrieve and, ideally, bring back to Earth for analysis, an ambitious goal that will mark another first for NASA.

This map shows regions in and around Jezero Crater on Mars, the landing site of NASA’s Perseverance rover. The green circle represents the rover’s landing ellipse. Photo courtesy NASA/JPL-Caltech/USGS/University of Arizona via Wikimedia Commons

Previous missions have discovered that billions of years ago, Mars was a much “wetter and warmer” planet with a “thicker atmosphere,” which means that microbial life could have potentially once thrived there. If the samples that Perseverance gathers are one day successfully transported to Earth, researchers will have an unprecedented opportunity to construct a clearer picture of the planet’s ancient past.

In addition to geological exploration, Perseverance is tasked with collecting data about the planet’s current climate using the Mars Environmental Dynamics Analyzer (MEDA), which will measure radiation as well as wind patterns, humidity, temperature and other weather indicators and monitor how those conditions, as well as Mars’ dusty environment, impact the rover.

According to NASA, Perseverance will be equipped with multiple technology demonstrations, including one called MOXIE (Mars Oxygen In-Situ Resource Utilization Experiment), which will “produce oxygen from Mars’ carbon dioxide atmosphere” that future human explorers on the planet could potentially use both to breathe and to launch rockets.

The rover also features an instrument dubbed SHERLOC (Scanning Habitable Environments with Raman & Luminescence for Organics & Chemicals), which will study samples of several materials used in spacesuits “embedded alongside a fragment of Martian meteorite” to determine how those materials fare when exposed to radiation on the planet, and whether researchers will need to develop new ones to outfit the astronauts who will one day be sent there. 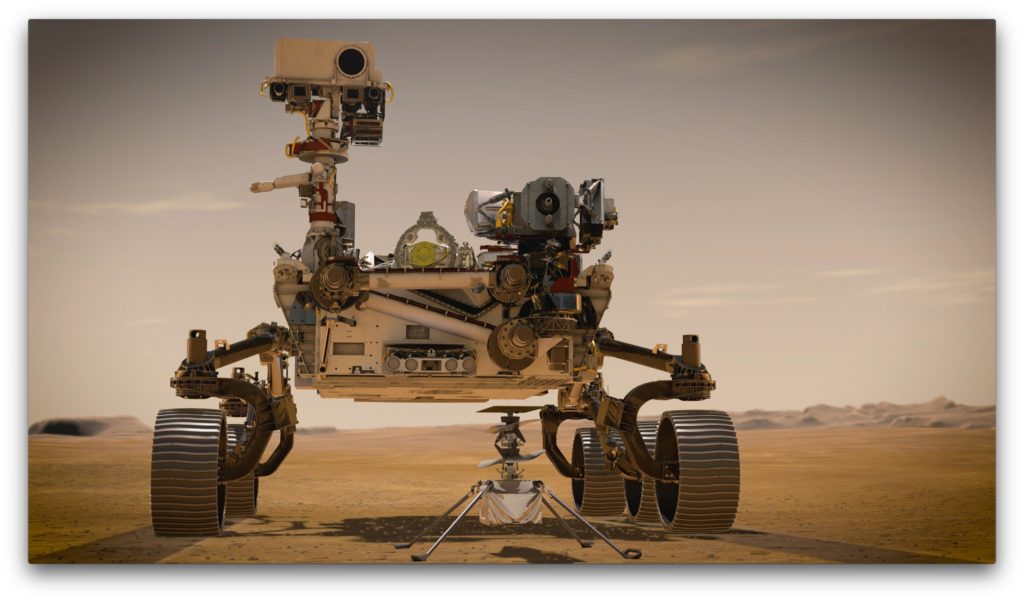 The mission will have a chance to set another milestone in space exploration, potentially launching the first aircraft ever flown on another planet. Perseverance will be accompanied by a 4 pound helicopter named Ingenuity, another technology demonstration whose sole goal is to achieve flight on Mars. Although the aircraft has rehearsed in simulated Martian conditions on Earth, the true test will be whether it can successfully fly in the red planet’s thin atmosphere and “bone chillingly cold” temperatures.

Alex Mather, a seventh grade student from Virginia, submitted the name “Perseverance.” After his selection was crowned the winner during an official naming event in March, Mather read his submission essay aloud:

“Curiosity. Insight. Spirit. Opportunity. If you think about it, all of these names of past Mars rovers are qualities we possess as humans. We are always curious, and seek opportunity. We have the spirit and insight to explore the moon, Mars, and beyond. But if rovers are to be the qualities of us as a race, we missed the most important thing: perseverance. We as humans evolved as creatures who could learn to adapt to any situation, no matter how harsh. We are a species of explorers, and we will meet many setbacks on the way to Mars. However, we can persevere. We — not as a nation, but as humans — will not give up. The human race will always persevere into the future.”

“Ingenuity,” a finalist in the rover naming contest that was submitted by high school student Vaneeza Rupani of Alabama, was eventually chosen to christen Perseverance’s accompanying aircraft.

At a news conference on Monday, NASA administrator Jim Bridenstine emphasized that the name Perseverance has taken on additional meaning in the context of COVID-19. The many people who worked to pull this mission off did so both from home and in a lab setting while following the new safety requirements we’ve all become familiar with over the past few months.

“NASA has determined that Perseverance is the science program that has the agency’s highest priority and the project has responded superbly to this challenge,” said Michael Watkins, director of the agency’s Jet Propulsion Laboratory, in an April statement from NASA. “When we realized the pandemic would affect Lab access, we were quick to define their chief objective as being workplace safety for team members and their families, and then built a plan around that providing the clearest path to the launch pad.” 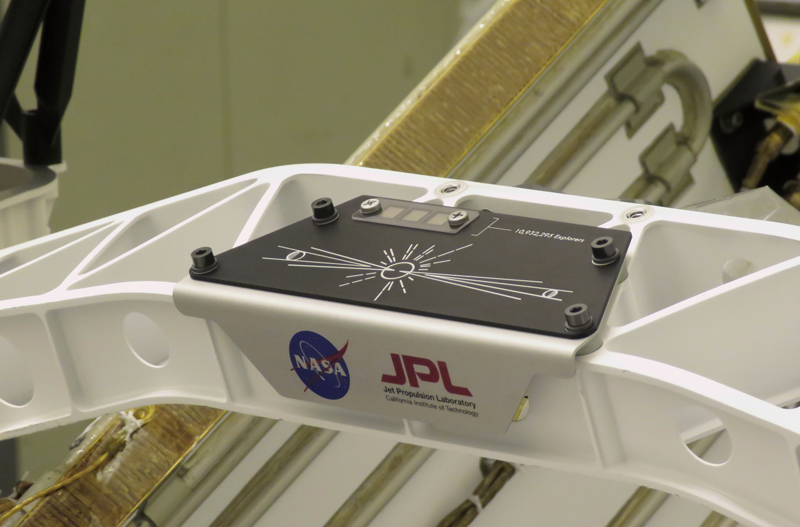 A placard commemorating NASA’s “Send Your Name to Mars” campaign was installed on the Perseverance Mars rover. Three silicon chips (upper left corner) were stenciled with 10,932,295 names and the essays from 155 finalists in NASA’s “Name the Rover” contest. Photo credit: NASA/JPL-Caltech.

When Perseverance launches on Thursday, it will carry the names of nearly 11 million people around the world who wrote into NASA’s “Send Your Name to Mars” campaign, along with 155 essays submitted by the finalists of the 2019 “Name the Rover” contest. The names and essays were etched onto three small silicon chips, which are now affixed to an aluminum plate on the rover.

During Monday’s conference, Mars 2020 Deputy Project Manager Matt Wallace noted that the rover also features a “COVID-19 plate,” which a recent press release described as a “tribute to the perseverance of healthcare workers around the world.” 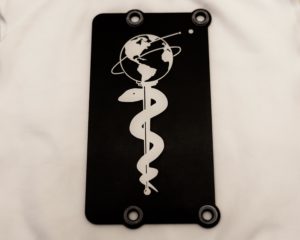 Attached to the Perseverance Mars rover, this aluminum plate commemorates the impact of the COVID-19 pandemic and pays tribute to the perseverance of healthcare workers around the world. Photo courtesy NASA/JPL-Caltech via Wikimedia Commons.

Wallace explained that the plate visually represents the global challenge faced during the pandemic as well as the spacecraft leaving Earth for Mars. Both are supported by a caduceus, the rod and serpent that has long symbolized the medical profession.

“During this period, this is a group of people that really inspired our team to keep going,” Wallace said. “We hope that, in some small way, this mission can help inspire the people that have had to go through this pandemic as well.”