Osiris-Rex, the first U.S. spacecraft slated to retrieve an interplanetary rock sample from an asteroid, arrives at its temporary home — Bennu — on Monday. Part pioneer and part dirt collector, Osiris-Rex will spend the next year or so looking for a spot to capture pieces of the asteroid before heading back to Earth.

After launching in September 2016, Osiris-Rex spent a year orbiting the sun, and then used the Earth’s gravity to swing toward the so-called “near-Earth asteroid.” Bennu hails from the asteroid belt between Mars and Jupiter, where it likely split from a larger, carbon-rich rock about 700 million to 2 billion years ago.

Over time, Bennu’s orbit around the sun became tighter and tighter, bringing it closer to our planet. Now, the asteroid comes within 186,000 miles of Earth every six years. (Note: Rumors that say Bennu will collide with and destroy Earth are greatly exaggerated.)

This animation shows the path that the OSIRIS-REx spacecraft will take on its journey to asteroid Bennu and back to Earth! OSIRIS-REx launches in 2016 and returns a sample of Bennu’s surface material to Earth in 2023. Image by NASA

Bennu’s proximity and its potentially organic composition enticed NASA to make this expedition, but the final dealmaker revolved around Bennu’s size. Small asteroids — under 650 feet in diameter — can break apart as they spin, which would be hazardous for an approaching spacecraft. With a diameter of 1,600 feet, Bennu is big enough to stick together.

Osiris-Rex will use laser, heat, chemical and X-ray scanners to make a detailed map of Bennu, which will aid the selection of a place to collect rocks with a robotic arm called TAGSAM. 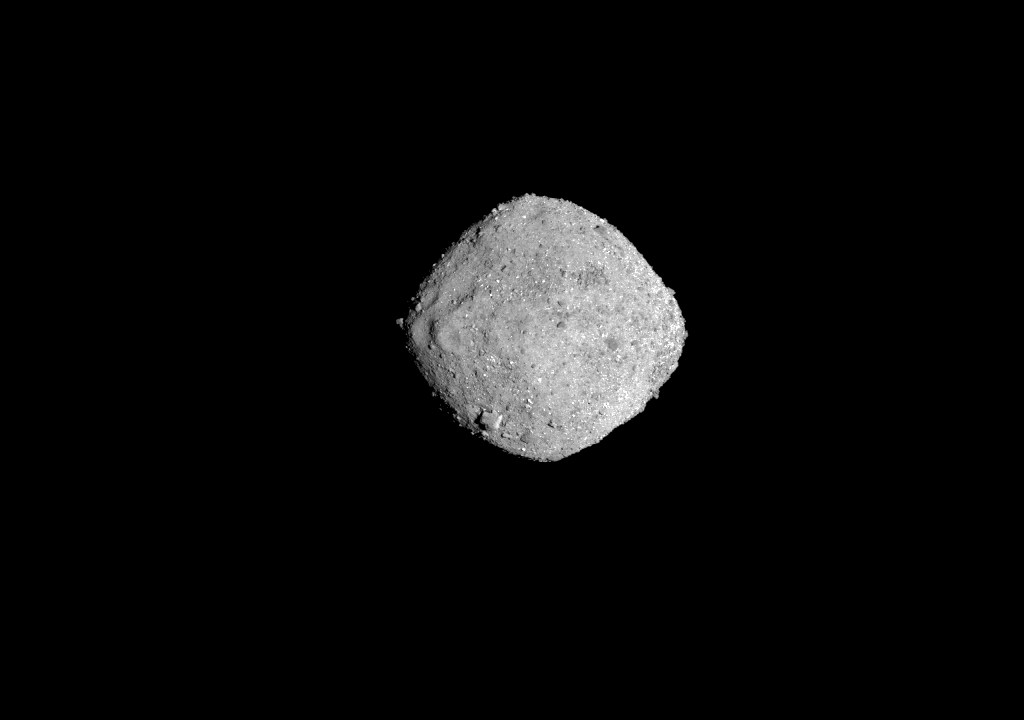 NASA’s OSIRIS-REx spacecraft obtained this image of the asteroid Bennu on November 16, 2018, from a distance of 85 miles. Image by NASA/Goddard/University of Arizona

Osiris-Rex will descend toward Bennu where the 11-foot arm will touch the surface and release up to three blasts of nitrogen gas. The resulting, kicked-up dust — between 2 to 70 ounces — will then hopefully land in an air filter-styled collection device at the end of the arm.

The spacecraft will then back away from Bennu and spend about another year cruising alongside the asteroid, before its departure window opens in 2021 and it can head home. NASA expects Osiris-Rex to return to Earth with its cargo in September 2023. That’s about three years after Japan’s mineral retriever — Hayabusa2 — returns from the asteroid Ryugu.

Osiris-Rex represents the second NASA probe in as many weeks with a mission to reveal the origins of our solar system by sifting through interplanetary dirt. Last Monday, the InSight lander successfully descended onto the surface of Mars, where it began a scientific inspection of the Red Planet’s interior.

How this spacecraft will sample an asteroid’s rocks, without even landing on it