Watch sea urchins turn themselves inside out to be reborn

Every summer, millions of people head to the coast to soak up the sun and play in the waves. But they aren’t alone. Just beyond the crashing surf, hundreds of millions of tiny sea urchin larvae are also floating around, preparing for one of the most dramatic transformations in the animal kingdom.

Scientists along the Pacific coast are investigating how these microscopic ocean drifters, which look like tiny spaceships, find their way back home to the shoreline, where they attach themselves, grow into spiny creatures and live out a slow-moving life that often exceeds 100 years.

The urchin pluteus drifts in the ocean currents for around a month before it lands on the rocky ocean floor. Photo by Josh Cassidy/KQED

“These sorts of studies are absolutely crucial if we want to not only maintain healthy fisheries but indeed a healthy ocean,” says Jason Hodin, a research scientist at the University of Washington’s Friday Harbor Laboratories.

Sea urchins reproduce by sending clouds of eggs and sperm into the water. Millions of larvae are formed, but only a handful make it back to the shoreline to grow into adults. 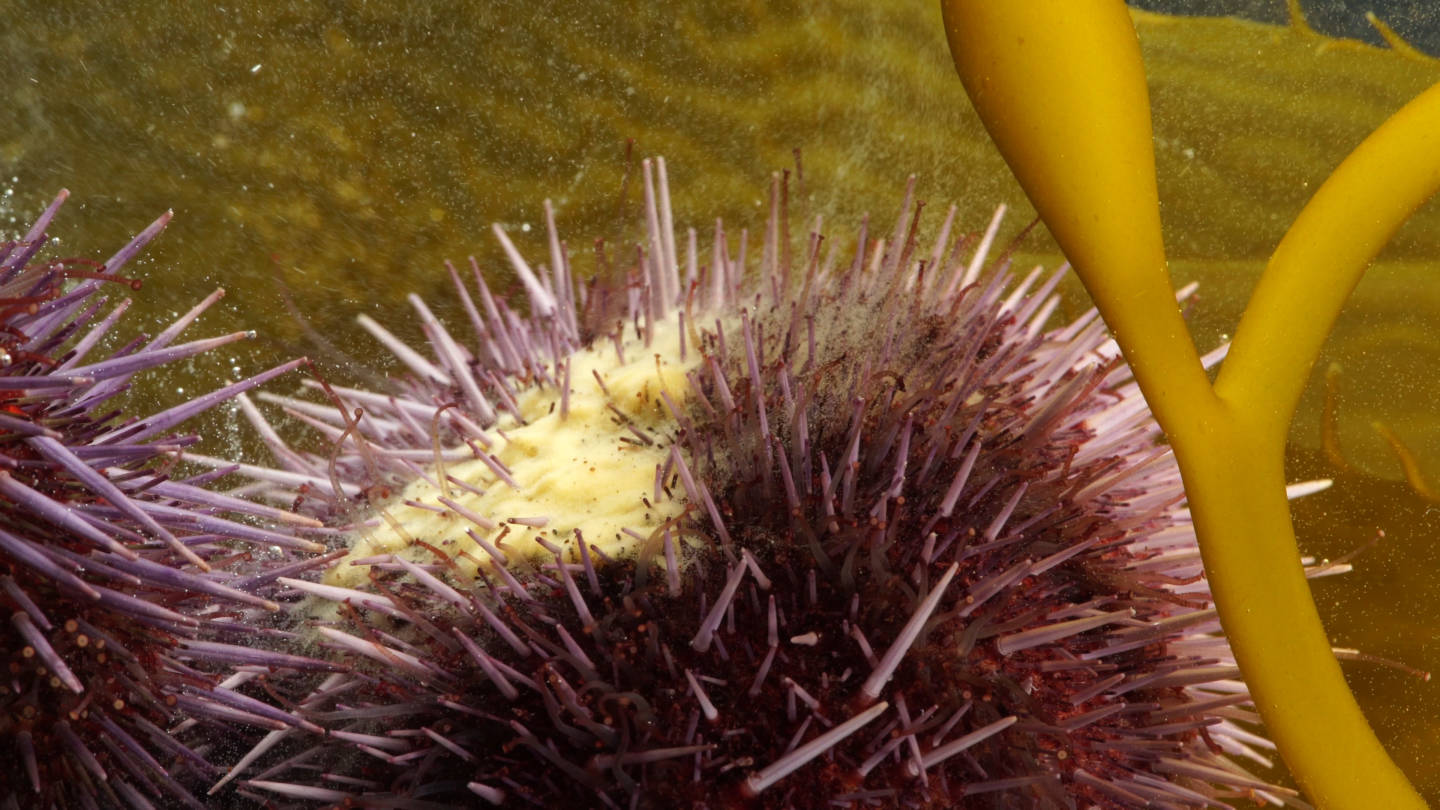 A female purple urchin releases eggs into the water, in a reproductive strategy known as broadcast spawning. Males release sperm around the same time, and the eggs are fertilized in the open ocean. Photo by Josh Cassidy/KQED

It may sound like a risky life strategy. But in the ocean, it works. Nearly every animal that lives along the shore — from mussels to sea stars to some species of fish — sends its young on an open ocean journey before they return home to grow into adults along the shoreline.

“One of the big challenges in understanding marine life cycles is understanding how larvae do this,” says Hodin, who is working with a research team that is trying to learn how purple sea urchins find their way home.

“How do they go from this vast open ocean and make their way back to very specific shoreline habitat?” 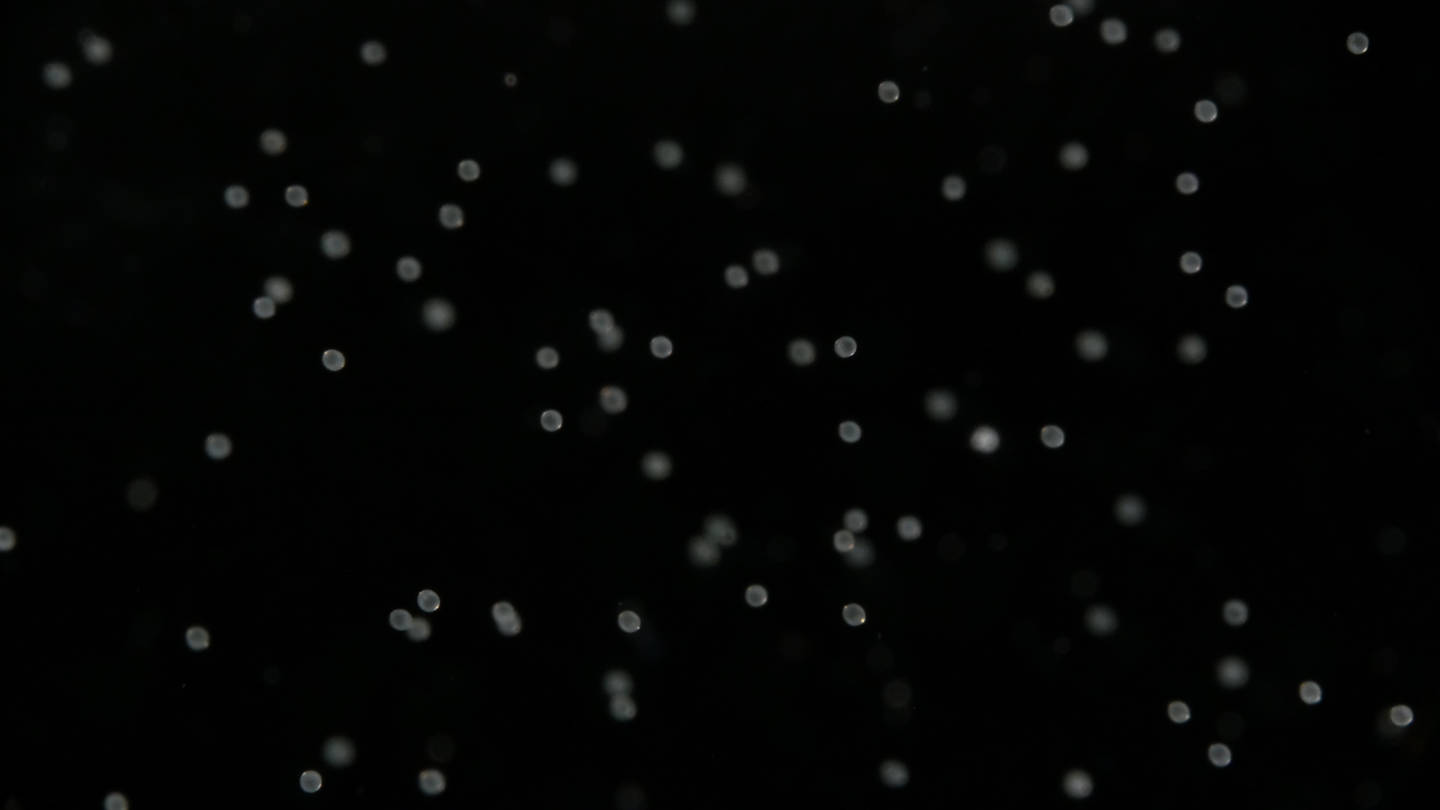 Millions of urchin embryos are formed when clouds of sperm and eggs are mixed in the ocean. They will develop for around one month as they drift among the plankton. Photo by Josh Cassidy/KQED

Hodin said it is similar to a housing search. When you are looking for a place to live, the first step is to decide on a neighborhood. Hodin, along with Brian Gaylord of the UC Davis Bodega Marine Laboratory in Bodega Bay and Matthew Ferner of the San Francisco State University Romberg Tiburon Center for Environmental Studies in Tiburon, recently found that that waves — specifically the strong, thrashing turbulence found in the urchin’s intertidal habitat — play a role in the larval urchin’s journey home.

“We think that turbulence is basically an indicator that they’re in a good neighborhood,” he says.

The waves in the intertidal zone are among the most extreme forces found in the ocean. But to a larval urchin, the waves represent home. Photo by Josh Cassidy/KQED

In fact, the team discovered that the crashing waves actually make the larval urchin — called a pluteus — develop faster.

“The turbulence acts as a primer,” Gaylord says. “It sort of pushes them into this settlement process earlier than we knew they would do this.”

Once the pluteus has found a neighborhood to settle in, it finds a home by using more local cues, like the presence of other adults or certain types of algae. It will then undergo a complete transformation.

“If you take a look at these marine larvae, they look literally nothing like the adults,” says Hodin. “In a sea urchin or a sea star, they even have a totally different body symmetry.” 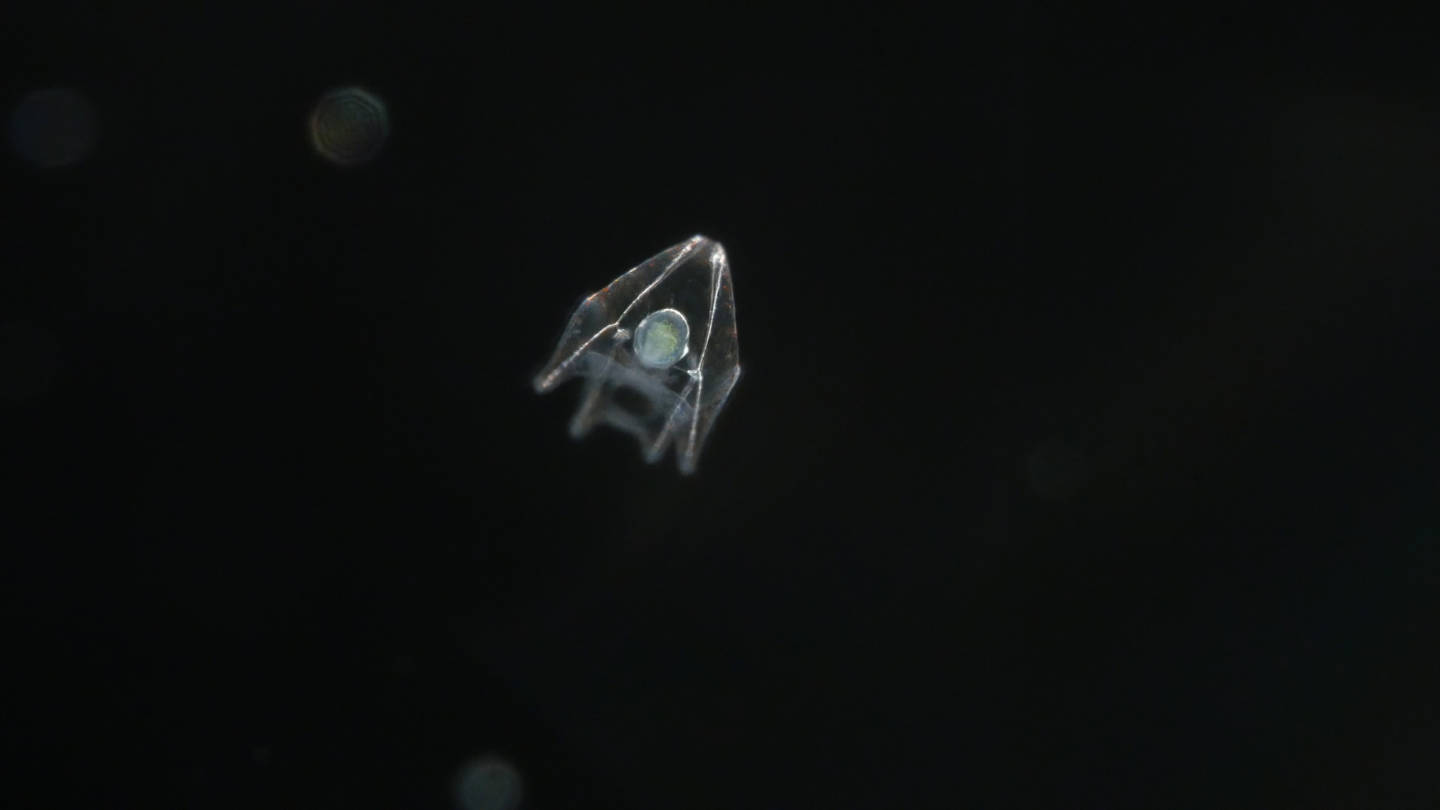 Sea urchins completely abandon their body type when they transform from larva to adult. This pluteus has two equal halves just like humans, but as an adult urchin it will have fivefold radial symmetry — five equal slices. Photo by Josh Cassidy/KQED

The larval urchin drifts in the ocean currents as a member of theplankton for a month or longer. How does it change from a tiny drifter the size of a grain of sand to a bottom-dwelling ball of spines?

Halfway through its voyage out to sea, “something very interesting happens,” Hodin says. “They do a little trick to try to make that transformation from being a larva to being a juvenile happen faster.” They begin to grow the juvenile urchin form — a miniature adult — inside of the larva’s body.

When it reaches the rocky shore, the juvenile urchin bursts out.

“It sticks its little tube feet out of the side of the little pluteus larva swimming around, and it grabs hold of the rocks or the bottom of the seafloor,” says Nat Clarke, a graduate student in Chris Lowe’sLaboratory at Stanford’s Hopkins Marine Station in Pacific Grove. 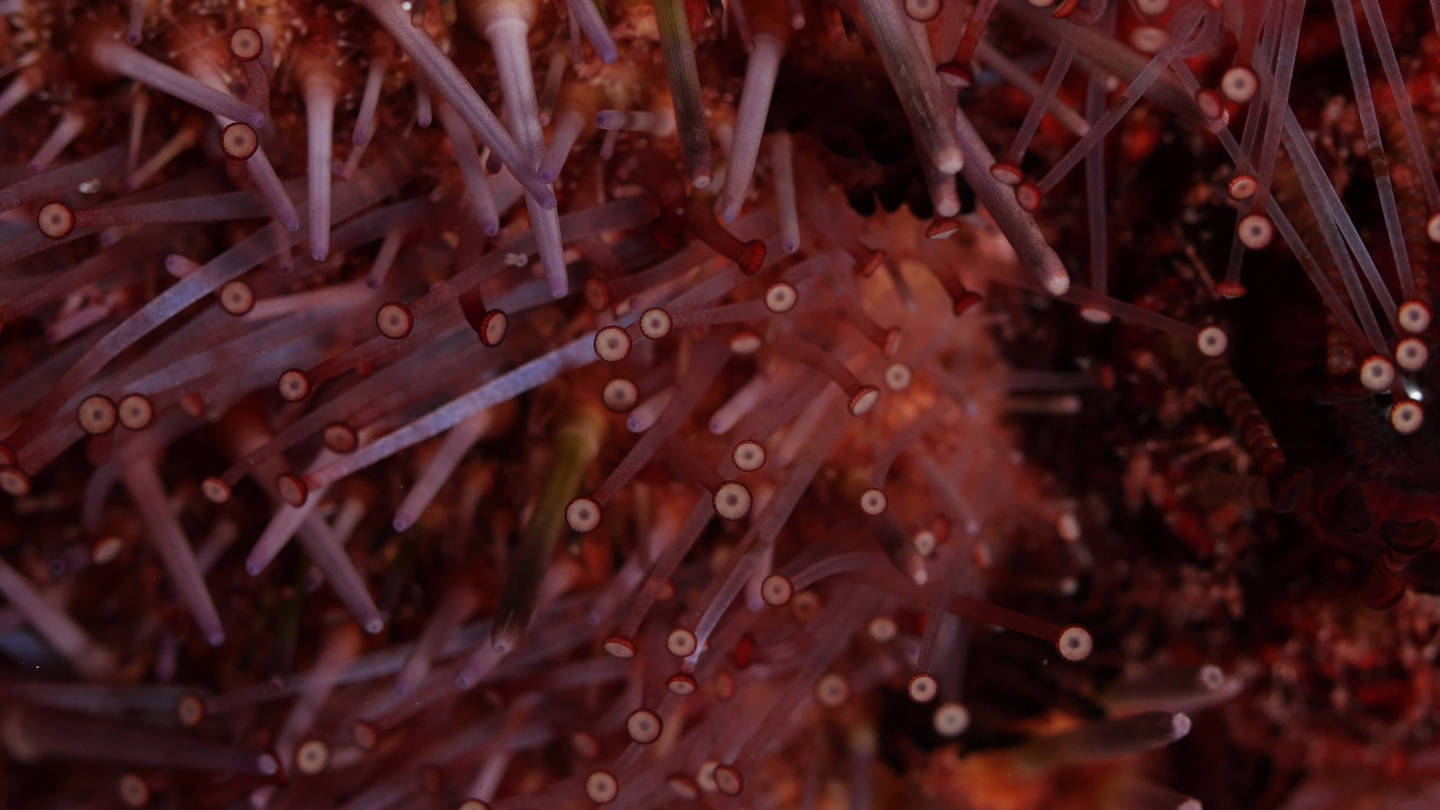 Tube feet enable adult urchins to grab food and hold on to the rocky seafloor. Juvenile urchins begin their lives on the bottom with just five tube feet. Photo by Josh Cassidy/KQED

Within hours, it begins to resemble the purple, spiky sea urchin that beachgoers regularly see in tidepools and along the ocean bottom.

Urchins commonly live for decades. Some can live for more than a century. Scientists know this because nuclear testing in the 1950s left trace amounts of radioactive material in red sea urchins’ shells, enabling researchers to calculate the sea urchins’ age. 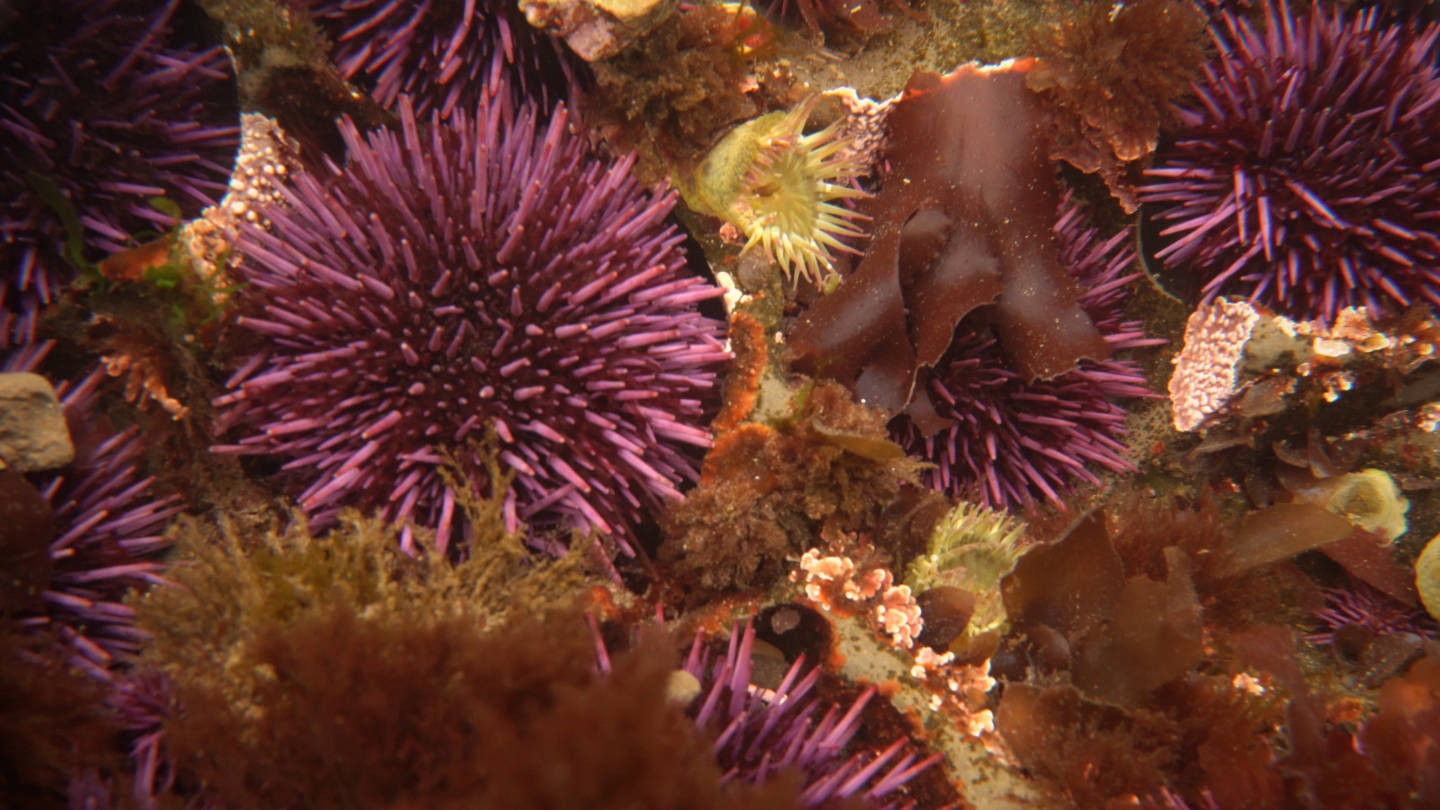 These purple urchins can live for 50 years or more. Photo by Josh Cassidy/KQED

Adult urchins spawn throughout their lives, sending their young out to sea just as their own parents did. Somewhat like salmon, urchins may come back to the place they were born, although scientists aren’t sure yet how or why.

“Research lately has been very, very strongly suggesting that most larvae come back to somewhere near the same shoreline that their parents came from,” Hodin says. “It’s something that people didn’t realize 15 to 20 years ago. There’s a lot more connectivity between the shoreline and the waters offshore where the babies are.”

This article is reproduced with permission from KQED Science. It was first published on August 23, 2016. Find the original story here.