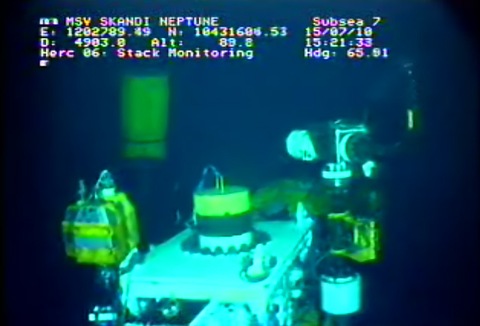 We may never know how much oil really leaked into the Gulf of Mexico.

Over the weekend came news that BP may be able to keep the Deepwater Horizon well capped until two relief wells can permanently seal it. But, as the Washington Post explains:

If the well is never reopened and connected to ships on the surface, it could complicate the U.S. government’s efforts to calculate the “flow rate” — the speed at which the oil was leaking. That would be vital to determining BP’s liability for the spill.

BP said last week it would be able to capture all of the oil flowing out of the ruptured well, based on government estimates of 35,000 to 60,000 barrels a day leaking. New ships that could attach to the new cap would let the company capture and process up to 80,000 barrels a day, a claim backed up by the Coast Guard.

If BP could capture all of the oil coming out of the well, we’d finally know how much “all” really is.

The total amount spilled is an important number, especially for BP’s eventual clean up bill. Among the many liabilities the company will face, the Clean Water Act includes fines of $1,100 per barrel spilled, or $4,300 per barrel if the spill results from “gross negligence.”

On Sunday, Rep. Ed Markey, D-Mass, chair of the House Energy and Environment Subcommittee, sent a letter to Coast Guard Adm. Thad Allen noting that if the cap remains closed, we’ll never know which end of that range is correct.

At a press briefing Monday afternoon, Allen said pressure readings could give scientists enough information to better estimate a final flow rate, even if the well is never re-opened. “I think there are lots of ways to determine the flow rate,” he said.

Allen added, “Each day we have the well shut in, that’s a lot less oil and pollution that’s going into the environment.”

Ira Leifer, a researcher at the University of California-Santa Barbara and a member of the government’s Flow Rate Technical Team, says that because there was no permanent monitoring equipment at the leak site, we will never know for certain the amount of oil released into the gulf.

“There could be variability over time,” he says. “So we will know to the best of our ability [the flow rate] at the time we took the measurements. But the appropriateness of scaling that up to three months is something that’s going to remain unknown […] And honestly it could be lower, or it could be higher. There’s just no way to know […] that level of certainty that everyone would love is not going to happen.”