Hedgehogs are the cutest reminder that we shouldn’t overuse antibiotics

Research that just unlocked how an antibiotic-resistant superbug evolved on one of nature’s prickliest mammals is an important reminder for humans: Bacteria are often very good at outmaneuvering the antibiotics designed to kill them.

By swabbing the skin, feet and nasal areas of nearly 300 hedgehogs, a joint international study shows how one strain of MRSA, or a bacteria known as methicillin-resistant Staphylococcus aureus, has developed antibiotic resistance in nature. Findings from researchers at the University of Cambridge, Denmark’s Serum Statens Institut and several other research institutions suggest the process is a result of a microscopic competition between the bacteria and a specific type of fungus, both found on the skin of the little, spiky critters.

New research by Larsen et al., finds that mecC-MRSA, a strain of methicillin-resistant Staphylococcus aureus, has evolved over time to resist antibiotics secreted by a neighboring fungus. Animation by Megan McGrew/PBS NewsHour

Hedgehogs probably don’t come to mind first when you think about antimicrobial resistance, which occurs when bacteria and other pathogens build up defenses against the drugs people typically use to kill them. Any amount of exposure to antibiotics breeds resistance in bacteria, but our misuse and overuse of antibiotics in fields like health care and agriculture over the past few decades have provided opportunities for superbugs, with the keen ability to outsmart our defenses, to emerge. We’re squarely to blame for that.

WATCH: Why overuse of antibiotics is a massive, ‘staggering’ problem in health care

The World Health Organization has called the modern-day crisis of antibiotic resistance “one of the biggest threats to global health, food security, and development today.” There are more than 2.8 million antibiotic-resistant infections in the U.S. each year, according to the Centers for Disease Control and Prevention. This microscopic threat is responsible, too, for more than 35,000 deaths annually.

This doesn’t mean people should be scared of hedgehogs (although it’s always good practice to leave wild animals alone). Rather, the findings sound the alarm on two fronts, argues Ewan Harrison, a senior author on the study: There’s a need for immense caution when using antibiotics, and it’s important to consider how the use of existing and future antibiotics affect the entire “biosphere,” and not just humans and livestock.

“Antibiotic resistance is a phenomenally complex problem,” said Harrison, who is also a researcher at the Wellcome Sanger Institute and the University of Cambridge. “This is telling us that if we [keep] throwing [new drugs] at the resistant bugs without fixing what the problem is in essence, we’re going to end up with the same problem again and again and again.”

Here’s a closer look at why antibiotic resistance is an international public health threat and how this new research can inform the way we address the crisis.

We tend to think of antibiotics as “miracle drugs” that revolutionized medicine, empowering humanity to no longer be at the mercy of bacterial infection. And while that’s not entirely untrue — we’re undoubtedly better off with antibiotics than without them — they’re no exception to the rule that all good things come at a price.

CDC estimates that 30 percent of antibiotics that are prescribed nationally in “acute care hospitals are either unnecessary or suboptimal.” These drugs are also widely used in livestock farms, often as a proactive measure aimed at preventing infections before they occur. An estimated 70 percent of “all medically important antibiotics” in the U.S. are sold for use on farms, according to a 2018 Pew Charitable Trusts fact sheet.

The more chances bacteria get to face off against antibiotics, the more likely their defenses will evolve to better meet the challenge. Some bacteria are better than others at playing the resistance game, but the outcome is the same: When infections become increasingly difficult to treat, human lives are on the line. An estimated 1.27 million people died globally in 2019 as a result of infections caused by antibiotic resistant bacteria. 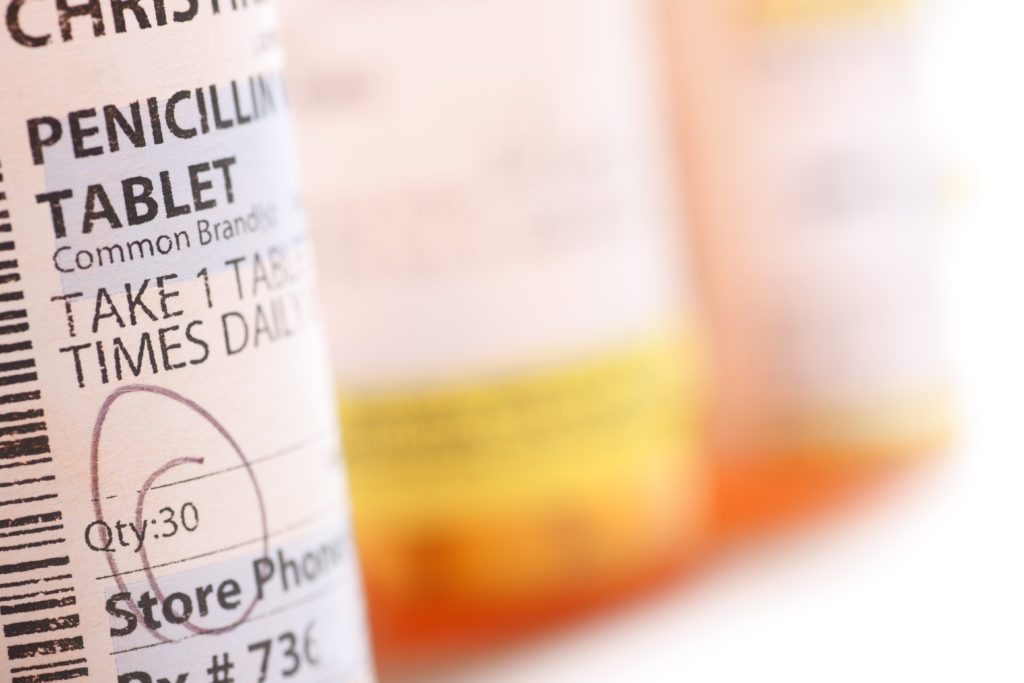 Another thing to note about infections is that the worst of these bacteria aren’t always guaranteed to make us sick. A small percentage of people are carriers for certain types of highly resistant bugs. But most of the time, those bacteria act more as “hitchhikers” rather than aggressors, said Lance Price, founding director of the Antibiotic Resistance Action Center at George Washington University.

Price described these opportunist superbugs as essentially the “Hannah Montanas” – or “Jekyll and Hydes,” pick your reference – of the bacterial world, in the way they lead dual lives. They won’t cause infection unless they’re given the chance and, if so, they can do real damage (carriers can also transmit these bacteria to other people).

“It’s only a pathogen when you provide the opportunity, like you’re cut open for surgery or somebody puts a catheter into your urinary tract,” said Price, who wasn’t involved with the hedgehog study. In other words, when the “normal functions of the body” are disrupted, infections caused by these bacteria can take hold, he added.

When infections occur, it’s important to clear them as fast as possible. If left unchecked, they can spread to the blood and cause serious outcomes like sepsis, a condition where the risk of mortality can increase with “every hour,” Price said.

In those cases, he noted, physicians often throw everything they’ve got at the infection to curb it quickly. The more resistant a bacteria is to an antibiotic, the more likely it is that a treatment will fail, meaning the infection will have a better chance of getting more serious — and even lethal — before it’s cleared.

Where do hedgehogs come in?

Harrison’s team analyzed more than 800 samples from hundreds of hedgehogs living in 16 wildlife rescue centers across Europe and New Zealand. Those samples were taken by swabbing the animals’ tiny feet, skin and nasal areas. In humans, MRSA can also dwell in our noses, as well as the throat and other moist parts of the body.

A large proportion of hedgehogs, particularly in the United Kingdom, Czech Republic and Denmark, tested positive for a specific type of MRSA, called mecC-MRSA. “mecC” refers to a specific gene responsible for resistance that’s related to ones found in most other kinds of MRSA, but is unique to this strain. 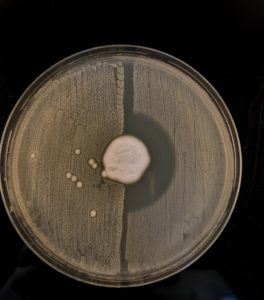 This photo shows fungus T. erinacei growing in the centre of an agar plate streaked with MRSA on the left half and methicillin-susceptible Staphylococcus aureus bacteria on the right. The fungus produces antibiotics, which kill methicillin-susceptible Staphylococcus aureus bacteria but not MRSA, resulting in a clear zone on the right with no bacterial growth. Photo by Claire L. Raisen

A fungus commonly found on hedgehogs – a dermatophyte known as T. erinacei – secretes two types of the antibiotic penicillin. The research team demonstrated that when the genes responsible for resistance were removed from mecC-MRSA, the bacteria became susceptible to those antibiotics, Harrison said. That suggests that the prolonged exposure to the fungus and its secretions was the catalyst that prompted resistance to evolve in this particular kind of MRSA.

They also used genome sequencing to determine when this resistance first emerged. MRSA gets around five to 10 mutations per year across its genome, Harrison said, a phenomenon that can be used as “a kind of proxy for time.” For some of the genomes discovered during this study, resistance genes originated in the 19th century, long before widespread antibiotic use began in the mid-20th century.

But Harrison noted that some bacterial lineages originate around the 1940s and 1950s, which suggests that our own antibiotic use did influence their evolution.

“While this [resistance] has been selected on the skin of hedgehogs, probably long before humans were using antibiotics, human antibiotic usage probably also had a major impact,” he added.

The study suggests that mecC-MRSA is common among hedgehogs in locations like England and Denmark, but much more rare in others, Harrison said. More than 100 of the hedgehogs swabbed, including those in Spain and Greece, tested negative for the strain. He noted that the sampling, while widespread, wasn’t exhaustive, and that there’s more work to be done to understand why the bacteria thrives in certain locations. mecC-MRSA can affect people, but causes just around 1 in 200 infections in humans — researchers think the strain jumped from hedgehogs to an intermediate species like cattle before reaching us.

How to mitigate antibiotic resistance

Although there’s a lot more research to be done on the topic, Harrison argued that his team captured the “key essence” of this story: There’s definitely a MRSA reservoir in hedgehogs, and we should apply that information to our own fight against antibiotic resistance.

When we do identify and market new antibiotics, Harrison said we need to treat them like the “incredibly precious” resource that they are. The relationship between mecC-MRSA and hedgehogs is just one example of how antibiotic resistance plays out way beyond the scope of our imagined influence. He said it illustrates the value of a “One Health” approach to health and medicine that prioritizes the interconnectedness between “people, animals, plants and their shared environment,” as defined by the CDC.

“If we develop a new antibiotic and start using it, we are inevitably going to select for resistance,” Harrison said. “When we’re screening for new antibiotics, when we’re looking at the impact of antibiotic usage, we can’t just focus on humans and livestock. We’ve got to think about what’s going on in the rest of the [world].”

There is no big financial incentive for major drug companies to develop antibiotics, Price said. Those companies make far more money off of pharmaceuticals designed to treat chronic diseases like diabetes that people will need every day for the rest of their lives, he added, compared to a pill used for three to 10 days to treat a bacterial infection.

“When we’re screening for new antibiotics, when we’re looking at the impact of antibiotic usage, we can’t just focus on humans and livestock. We’ve got to think about what’s going on in the rest of the [world].”

More important than chasing the next new antibiotic, Price argued, is the urgent need to stop infections before they happen. He said we have the power to do so by taking actions like investing in public health, improving wastewater infrastructure and ensuring access to clean water across the globe. Bolstering environmental controls that contribute to infection will help prevent them in the first place, leading to a decreased need to use antibiotics in the first place.

The emergence of superbugs in nature — like on the skin of hedgehogs – is not exactly within our control, Price said.

Left: Recent research sheds light on how the defenses of a specific strain of methicillin-resistant Staphylococcus aureus emerged in the presence of an antibiotic-emitting fungus, both of which reside on the skin of some hedgehogs. Photo via Getty Images