The problem with overusing antibiotics

When they were developed nearly a century ago, antibiotics were intended as a last resort.

But between 2000 and 2015, antibiotic use more than doubled worldwide, according to a study by the Center for Disease Dynamics, Economics and Policy, published this week in the Proceedings of the National Academy of Sciences. And at least 30 percent of antibiotics prescribed in an outpatient setting are unnecessary, the Centers for Disease Control and Prevention have found.

And by 2050, some projections now suggest that infections resistant to antibiotics could surpass cancer as the top cause of death worldwide, causing as many as 10 million fatalities a year.

Here’s what we know about antibiotic resistance, and how researchers are trying to fight it.

What is antibiotic resistance?

Bacterial infections once were a death sentence. Then, in 1928, Scottish bacteriologist Alexander Fleming discovered penicillin, and soon, antibiotics were widely prescribed to treat everything from strep throat to Lyme disease. But less than a century later, the global overuse of antibiotics has led to a rise in resistance to the drugs, along with the risk of entering a post-antibiotic world.

Simply put, the more antibiotics you use, the more your body normalizes them, and the faster resistance to them will emerge.

Simply put, the more antibiotics you use, the more your body normalizes them, and the faster resistance to them will emerge. When the drugs stop working, people can die of once-treatable infections, like pneumonia or gonorrhea.

In the latest study in the Proceedings of the National Academy of Sciences, researchers from the Center for Disease Dynamics, Economics and Policy found based on data from 76 countries that people took 35 billion defined doses of antibiotics worldwide every day in 2016. That’s a 39-percent increase in consumption rate compared to 16 years ago.

Why has antibiotic use grown? 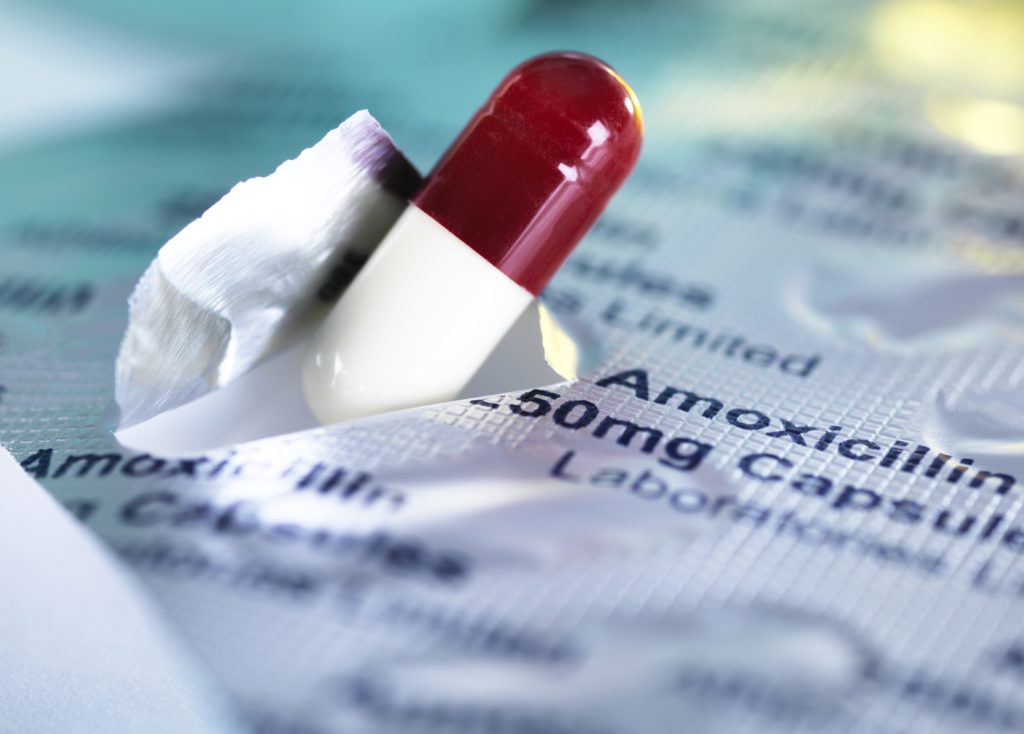 Anecdotally, many researchers suspect this growth is driven by overprescription. But it also stems from expanded and unregulated use of antibiotics in low- and middle-income countries, said Eili Klein, one of the study’s authors and a professor at Johns Hopkins University Department of Emergency Medicine.

“We know many of these antibiotics are being used inappropriately,” Klein said, yet there is no comprehensive body that is in charge of measuring exactly where or how.

The biggest issue, Klein said, is that surveillance data that monitors antibiotic use and resistance is not where it needs to be. To conduct the study, Klein said researchers turned to pharmaceutical company data called IQVIA MIDAS, which surveys national antibiotic sales to gauge how much people are consuming. In 2015, the World Health Organization launched the Global Anti-microbial Surveillance System, which aims to create a standardized way of sharing “the collection, analysis and sharing of AMR data at a global level.” It’s still in an early implementation phase.

Most countries have agreed to do a better job of collecting data, but Klein said identifying emerging biological threats is still difficult because nations may not use the same definitions to monitor and identify emerging threat of antibiotic-resistant infections. “We know many of these antibiotics are being used inappropriately,” Klein said, yet there is no comprehensive body that is in charge of measuring exactly where or how.

If use of antibiotics goes unchanged, Klein said, we already know where the issue will lead — to a world where few, if any, current antibiotic treatments are effective.

“Why push the envelope when we know there’s a tremendous risk?”

How much does antibiotic resistance cost? 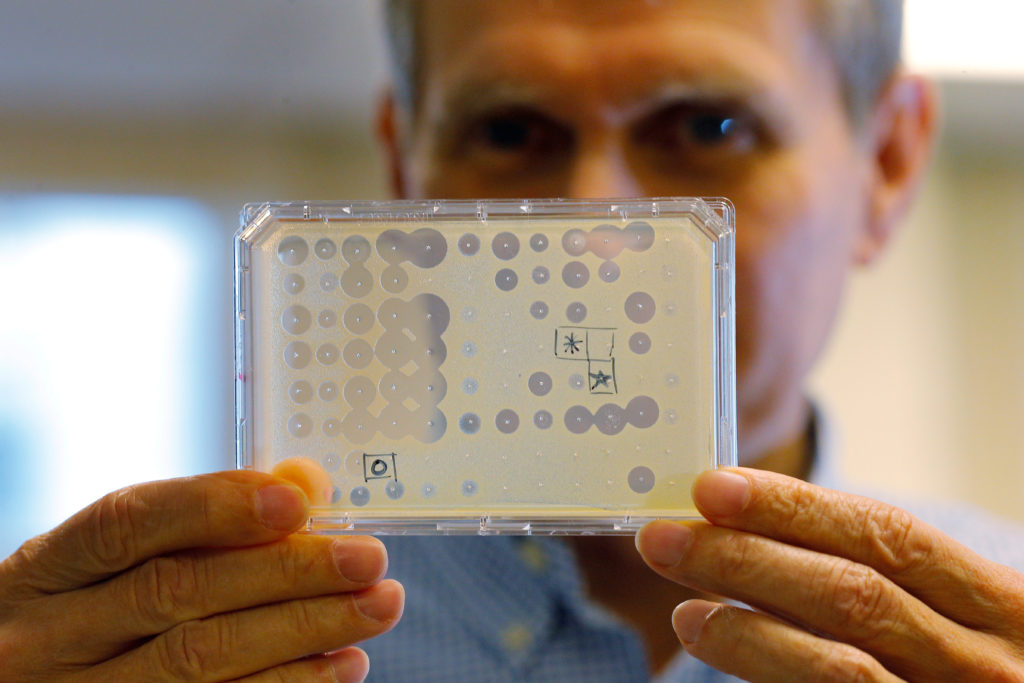 Dr. Kim Lewis, co-founder of biotechnology company NovoBiotic Pharmaceuticals, Director of Antimicrobial Discovery Center at Northeastern University, and lead scientist on the team that discovered the promising new antibiotic Teixobactin being developed at NovoBiotic, holds up a test of new, potential antibiotics at his lab in Boston, Massachusetts. REUTERS/Brian Snyder.

The overuse of antibiotics is already showing up in how much Americans pay for health care costs, according to a study published March 21 in Health Affairs. It found that antibiotic-resistant infections occurred at roughly the same rate from 2002 to 2014, but treatment costs nearly doubled, said Kenneth Thorpe, who chairs the Department of Health Policy and Management at Emory University in Atlanta.

Each year, 23,000 Americans die from antibiotic-resistant infections, according to estimates from the Centers for Disease Control and Prevention. Since 2002, Thorpe said health care costs have risen by $1,383 per infection, adding up to $2.2 billion annually, largely because people receive more complicated treatments and endure longer hospital stays to treat the infections. In this latest study, 11 percent of infections were resistant — double what the data showed nearly decades earlier, said Thorpe, who is also the chairman for the Partnership to Fight Chronic Diseases.

To understand the cost of treating antibiotic resistance, Thorpe analyzed more than a decade of data from the nationally representative Medical Expenditure Panel Survey, produced by the Agency for Health Quality Research. In his resulting report in the journal Health Affairs, he called for improved prevention efforts, including reduced use of antibiotics, development of stronger antibiotics and vaccines that could stem the spread of potentially uncontrollable infections.

Antibiotic-resistant infections occurred at roughly the same rate from 2002 to 2014, but treatment costs nearly doubled.

But in recent years, the CDC has devoted fewer resources to find answers to this growing threat. In its budget request for fiscal year 2018, the CDC asked to reduce federal funding for antibiotic resistance research by $22.7 million.

“CDC will continue to work with state and local health departments to protect Americans from the growing threat of antibiotic resistance, but will focus resources on States with demonstrated performance and highest need, reducing investments in research,” the agency said in its proposed budget that year.

For fiscal year 2019, the CDC pushed for further cuts to funding for antibiotic resistance, reducing funding to “combat antibiotic-resistant pathogens” by another $24.8 million. In total, it proposes dedicating $137 million to the issue, down from $162.6 million in fiscal year 2017.

The CDC did not respond to the PBS NewsHour’s request for comment on its funding for antibiotic resistance.

Considering the threat at hand, “that’s a problem,” Thorpe said.

Where do we go from here? 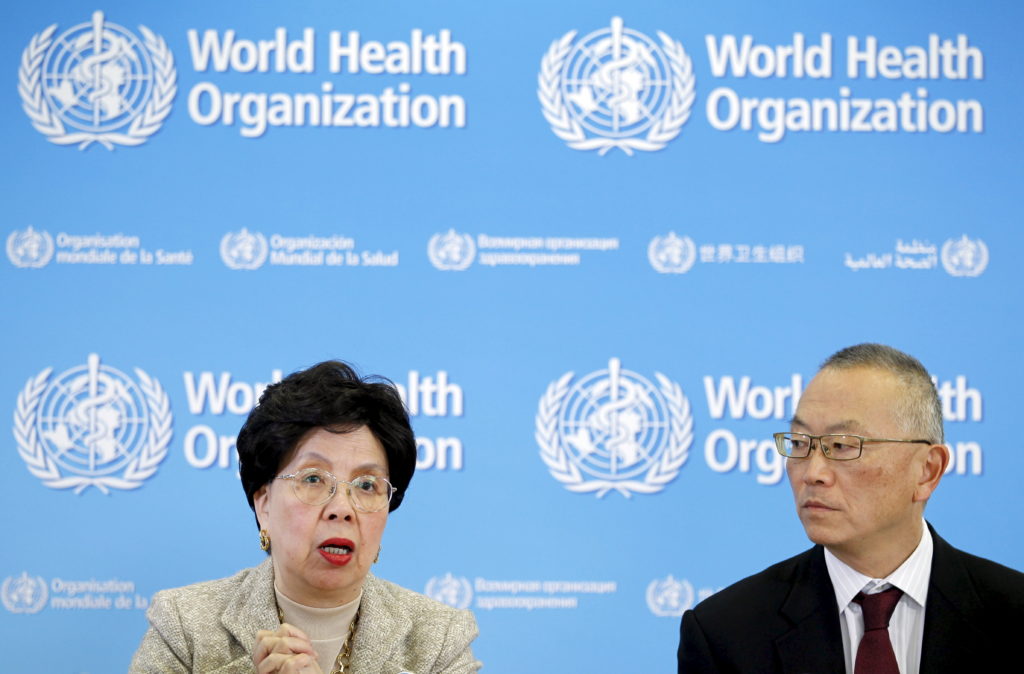 World Health Organization (WHO) director-general Margaret Chan (L) and WHO’s assistant director-general for health security Dr. Keiji Fukuda address the media during a news conference on the results of a multi-country survey on antibiotic use and antibiotic resistance. REUTERS/Pierre Albouy.

It’s unclear what the tipping point for a post-antibiotic era might be, Klein said. And that’s what concerns him.

If you ask Marc Sprenger what needs to be done to stem antibiotic resistance worldwide, he will rattle off a to-do list. As the World Health Organization’s director for antimicrobial resistance, he said he has watched this looming threat grow for years.

Among his top priorities are programs that:

It’s unclear what the tipping point for a post-antibiotic era might be, Klein said. And that’s what concerns him.

Under Sprenger’s leadership, the WHO also set a 2019 deadline to develop a new class of drugs to combat antibiotic-resistant superbugs, a goal several teams of researchers are now chasing. Among the latest projects is a new treatment that uses synthetic retinoids instead of antibiotics to kill methicillin-resistant Staphylococcus aureus, or MRSA. This could be used to treat things like acne or certain kinds of cancer.

Researchers at Brown, Emory and Northwestern Universities, along with colleagues at Rhode Island Hospital, Massachusetts Eye & Ear Infirmary and Massachusetts General Hospital, published those findings Wednesday in the journal Nature. In mice, the team of researchers used two retinoids that pierced and ultimately killed the MRSA membrane faster than the infection could evolve and save itself.

“The rate of progress is unlikely to meet the expected need for the foreseeable future,” said Eleftherios Mylonakis, chief of infectious diseases at Rhode Island Hospital who led the team, in an emailed statement to NewsHour.

To reverse worsening trends in antibiotic resistance, Sprenger said: “The responsibility is at several levels.”

“It’s not only on the government and the doctor, but it’s also on the patient who goes to the doctor who has a sore throat and is asking for antibiotics,” he said. “This is something that really needs to change. Often, the patient doesn’t need anything — just wait or use alternatives.”

Left: Between 2000 and 2015, antibiotic use more than doubled worldwide, according to a new study. REUTERS/Francisco Bonilla