What if we could put our plastic trash to good use?

But we need plastics too. They’re crucial for our food packaging, creating a barrier against nasty bacteria and parasites, which is important during disasters. Physicians choose plastic for their gloves, sample vials, IV bags and thermometer covers because it helps prevent cross-contamination. And plastic often replaces metal on vehicle bodies to make them more fuel efficient and safer in accidents.

The physical features that make plastic useful also make it difficult to recycle and hard to replace in our manufacturing chain. And we dispose of plastics in unsustainable ways — 91 percent of the material isn’t recycled. To help reduce plastic waste, scientists and inventors are creating novel uses for plastics that would otherwise end up in the trash, or alternatives to the most wasteful plastic products we use today.

More than 27 million tons of polystyrene are manufactured every year. Our polystyrene takeout containers, plastic spoons and packing peanuts are commonly thrown away after a single use. But instead of heading to the trash, this plastic could have a useful second life, or could be avoided altogether, thanks to two innovative research projects under way now:

How to replace one of the most pervasive plastics

“The question was never really asked about what do we do with [plastics] after we’ve finished with them,” said John Williams, a chemist and business director of Aquapak, a biodegradable plastic manufacturer. For example, recycling plants can’t process paper coffee cups, which are lined with a thin layer of plastic for insulation and water resistance, causing an estimated 600 billion cups to be thrown away every year.

A bathtub full of packing peanuts made of polystyrene would only yield about three bowling balls worth of recyclable plastic.

Williams said the plastic problem stems from our linear economies, wherein the material loses its value after use and is discarded at the end of its life cycle, instead of being repurposed.

Rather than tapping into oil resources to produce a steady stream of new and unnecessary plastic items, Williams said plastic products should be more purposefully produced and salvaged after use, even if it incurs additional costs to do so.

While this position seems to run contrary to capitalism, it is important to remember that plastic pollution comes with a social and environmental cost — to the tune of $139 billion a year, according to The Economist.

Damages to our health and the environment account for a third of this tab because of plastic-related pollution in air, water and land. So even though a shift to a sustainable economy — where more waste products are reused — might raise prices for manufacturers and consumers in the short-term, it could reduce environmental and health costs overall. 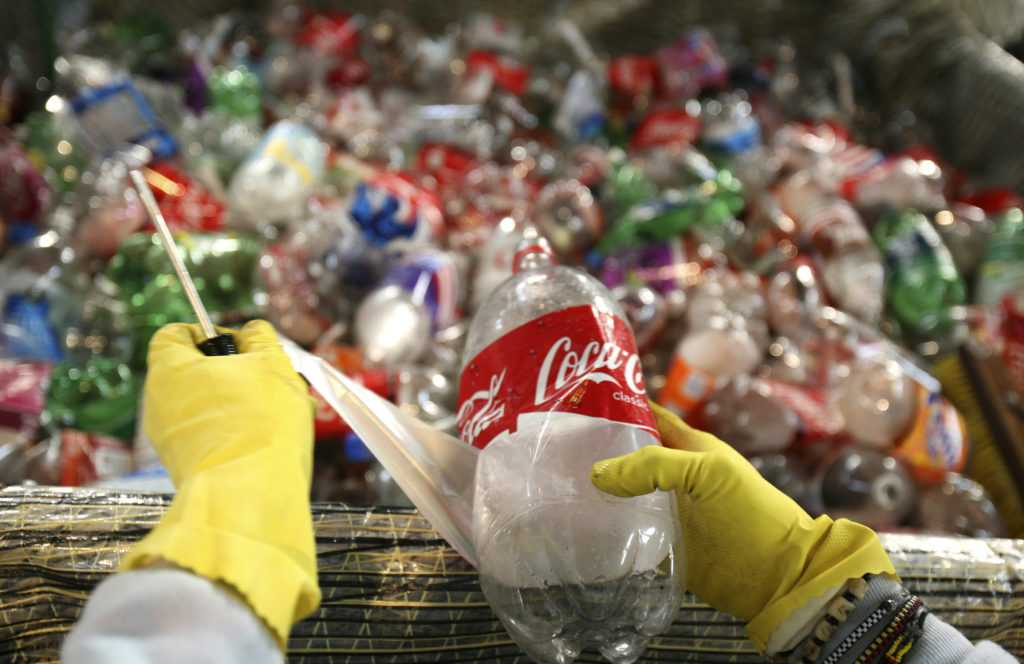 Labels on plastic bottles can gum up recycling factories. Photo by REUTERS/Robert Galbraith

So, Williams’ company spent 15 years developing a plastic alternative called Hydropol that can be more easily recycled than materials like polystyrene.

Hydropol can replace thin layers of non-recyclable plastics in products — like a plastic coating on an orange juice label — that would normally create impurities that make recycling more difficult. It is water soluble and can dissolve into harmless organic components. Hydropol can also be recycled with paper and plastic because of its unique cellulose structure.

While it sounds great, Yu Dong, a material scientist from Curtin University in Perth, Australia, noted that the basic material behind Hydropol still needs some tweaking.

Dong studies polyvinyl alcohol, the central component of Hydropol, and how it is used in packaging. While polyvinyl alcohol can biodegrade and easily blend with other materials, Dong said it comes with some notable setbacks.

“It has limited stiffness, and that means that the mechanical properties are probably not that great,” Dong said. “The material cost is a bit higher than petroleum-based [plastic].”

While Dong could not comment specifically on Hydropol without knowing its formula, he said polyvinyl alcohol plastic is also highly sensitive to the environment. The wrong temperature or humidity can degrade it.

There’s still work to be done to find the perfect ratio of polymers to strengthen plastic alternatives, Dong and Williams said.

Using plastic trash to clean up

Swapping polystyrene with biodegradable alternatives will keep waste from entering landfills, but it doesn’t completely address the mounds of discarded plastic already in the environment.

Reprocessing polystyrene isn’t economical because the process yields a small amount of reusable material. Even in the best conditions, scientists can only recover 10 percent of polystyrene and recycle it into other biodegradable material. A bathtub full of packing peanuts made of polystyrene would only yield about three bowling balls worth of recyclable plastic.

So, some labs are looking into using one environmental problem to solve another. 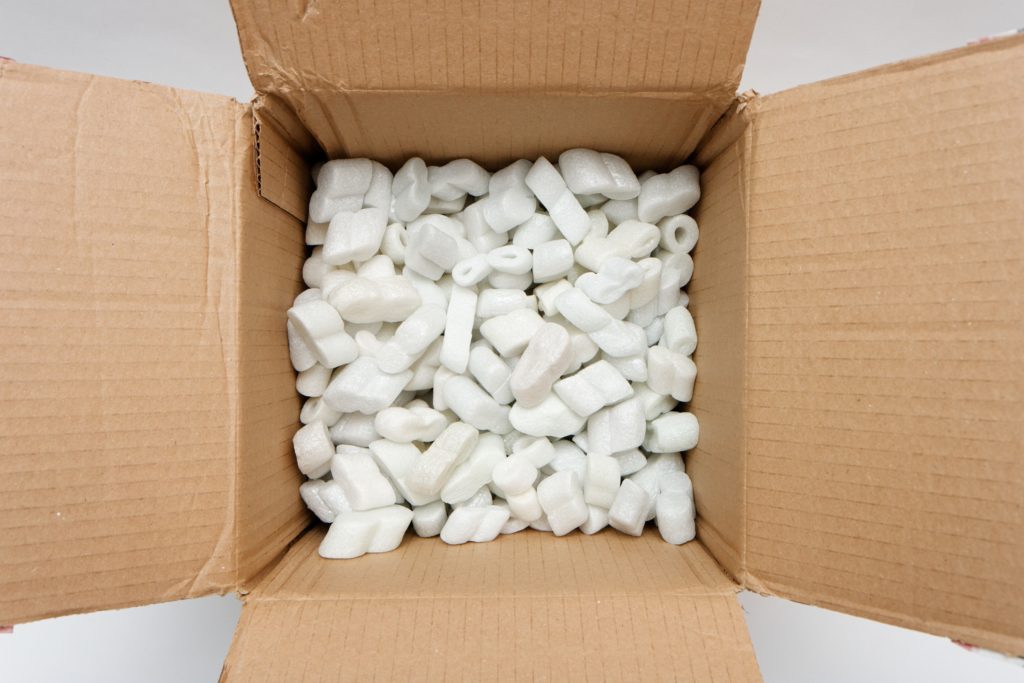 Polystyrene, such as in these packing peanuts, can take up huge amounts of space in landfills. Even in the best conditions, scientists can only recover 10 percent of polystyrene and recycle it into other biodegradable material. Photo by slavapolo/Adobe Stock

Researchers in Brazil and the U.K. have concocted a way to break down synthetic dyes, a major pollutant in wastewater, with filters made from polystyrene.

Worldwide, 800,000 tons of dyes are produced annually, and about 12 percent of synthetic textile dyes used each year are lost during the manufacturing process, according to the EPA. Around 20 percent of these losses enter the environment from wastewater plants.

The scientists’ filter cleans up Rhodamine B,

“The concept was to try and see if there was another way of making use of waste plastics instead of just the normal recycling process,” said Julian Eastoe, a chemist at the University of Bristol.

To make the filters, the team dissolves discarded polystyrene in a solvent, which is then frozen to create a foam block. The scientists shine light on the mixture and add tin oxide, a catalyst.

Think of the foam block like a kitchen sponge and the tin oxide particles as dish soap, essentially ‘cleaning’ away impurities and breaking down pollutants into less environmentally damaging compounds, like carbon dioxide.

“It uses a waste product to get rid of another waste product. It’s kind of a win-win situation,” said Erica Wanless, a chemist at the University of Newcastle, Australia, who wasn’t involved in the project. “It’s certainly not currently economical to recycle polystyrene.”

When tested in the study, the catalyzed blocks degraded 98 percent of the dyes. The foam block can be used five times, and then reused by dissolving it in the same solution and adding more catalyst. Eastoe hopes to expand this method to other contaminants.

“We can do a lot to educate people to make some of their shopping selections based around packaging,” Wanless said. “But the key thing is you need to reuse that plastic material.”

Left: Plastic picked from a landfill for recycling. Photo by Jenna Jambeck,University of Georgia