What Kilauea’s eruption can reveal about volcanoes on other worlds—and possibly, alien life

Over the three decades it has belched toxic gases and churned out lava, Hawaii’s Kilauea volcano has been a menace to the area that surrounds it. Since May 4, Kilauea’s eruption has destroyed more than two dozen homes and forced the evacuation of nearly 2,000 people. On Sunday, a new fissure — stretching nearly 1,000 feet — oozed lava across private land.

But for the science community, it’s become one of the most studied volcanoes on the planet, offering clues about what volcanoes and life might exist on other worlds.

Volcanoes are much more about creation than they are about destruction.

For scientists, Kilauea provides a natural laboratory on Earth to study volcanoes found on other planets and moons in our solar system. Scientists are using Kilauea to explore volcanism — a process fundamental to the formation of moons, planets and perhaps even other forms of life.

Kilauea would look great, if not small, on Mars

Science thrives on setting up models, and Kilauea has become an ideal one for studying Martian volcanoes.

Kilauea sits in the middle of a tectonic plate — not on the edge, like most volcanoes. This means magma can punch through the crust to form volcanoes, without the help of tectonic plates slamming together or stretching apart. Since Mars has no tectonic activity, Kilauea is a great test case for those of us who don’t have a spacesuit or high-powered rocket.

“Obviously, it’s a big advantage to be able to walk all over a volcano, like you can in the Hawaiian islands, and put instruments and seismometers [near the volcano], grab rocks and chemically analyze them,” said Patrick McGovern, a planetary geophysicist with the Universities Space Research Association at the Lunar and Planetary Institute. 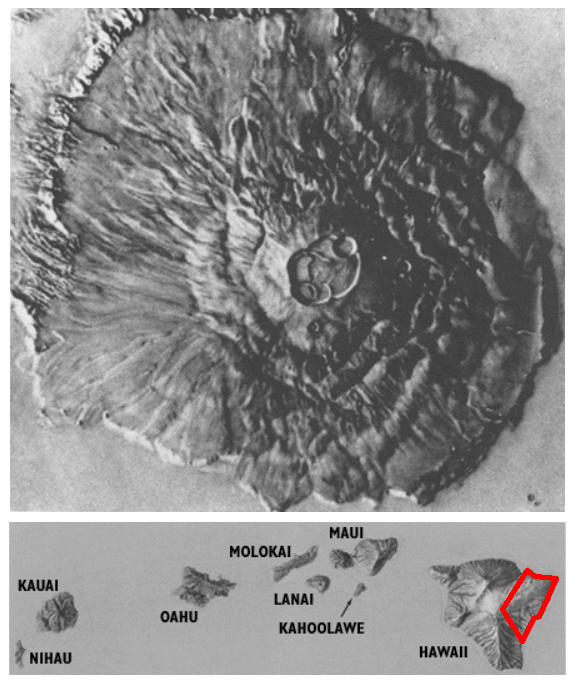 Mars’ Olympus Mons, the largest volcano in the solar system. Below, Hawaiian islands to scale, with the generous red outline of Kilauea. Photo by USGS/NASA/JPL, edited by author.

McGovern studies the way volcanoes formed on Mars – and why they are so big compared to similar shield volcanoes, characterized by their low flanking, gradual slopes, like Kilauea.

McGovern said it is easier to map the slopes of Martian volcanoes compared to Kilauea because there are no oceans on Mars to obstruct your view. On Earth, the largest shield volcano, Hawaii’s Mauna Loa, is 6 miles high and 75 miles across. Martian volcanoes, by comparison, are much larger: Olympus Mons is 16 miles tall and 374 miles across.

Based on analysis of Mars’ surface, three key factors have allowed volcanoes there to grow so large: The red planet has less gravity, no tectonic movement and longer volcanic eruptions when compared to Earth.

But many questions remain: What keeps the Martian lava from continuously piling up and forming steep volcanoes? Why do Martian volcanoes look like Kilauea even though they exist in such a different environment?

“There’s something at the base of Hawaii that’s allowing Kilauea to slip,” McGovern said, like a layer of clay in the surrounding seafloor. This layer of clay could create lubrication that allows Kilauea to spread and keeps its slopes so gentle.

McGovern concedes the exact mechanics and the presence of a clay layer around Kilauea are under debate, but clay has been found in Martian soil, which suggests that similar processes likely occur on both planets.

“It’s like a game of ping pong,” said Tracy K. P. Gregg, a planetary volcanologist at the University of Buffalo. “We learn something on Earth and we hit it over to Mars and say, ‘Okay, does it work on Mars?’ Then we hit it back to Earth and ask: ‘Does it work still?’”

Before the 1960s, Lopes said, most scientists assumed moon craters were a result of volcanic eruptions, and dark patches on the moon had been carved by past oceans.

When the Apollo missions brought back rock samples from a lunar crater, scientists found signs of shock on the rocks, indicating these craters were created by meteorite impacts. However, samples from the dark patches looked like long-hardened lava.

In 1971, the Mariner 9 spacecraft beamed back the first images of volcanoes on Mars. This busted open the door for extraterrestrial volcanism and pretty soon, probes revealed similar signs of volcanoes on Mercury and Venus.

“The big, big discovery in planetary volcanism came in 1979,” Lopes said, when Voyager 1 flew by Jupiter and its moon Io, spotting active volcanoes on the moon’s surface. “That was a huge surprise – we never thought a moon the size of Io would have active volcanoes.” 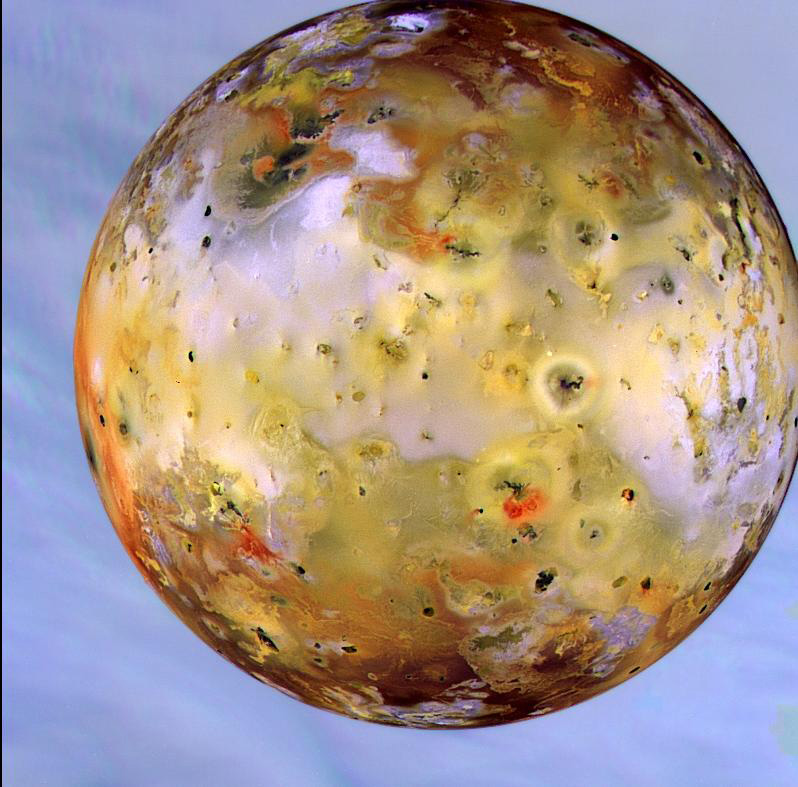 Since learning that volcanoes are not unique to Earth, their importance in understanding the formation of solid celestial bodies has only grown. The movement of tectonic plates and the eruption of volcanoes adds material to the surface of a planet or moon, while impacts from meteorites and erosion grind it down. In this sense, volcanoes are much more about creation than they are about destruction.

Volcanoes could also be key players in the creation of life here on Earth — and possibly beyond.

“We have irrefutable evidence of the strength of the connection between volcanoes and living things on Earth,” Gregg said. “We’re taught in school that the Sun is the base of the food chain – but at the bottom of the ocean there are living things and no light.”

The icy volcanoes on moons like Enceladus and Europa could also harbor life that feeds off volcanic energy, Gregg said.

This month, NASA launched a new mission to Mars called InSight–and McGovern said he can’t wait for the spacecraft to arrive in November. InSight carries a seismometer and a heat probe, which should help scientists examine the connection between marsquakes and the planet’s volcanoes.

“It’s going to be the first time we’ll be able to use instruments to actually peer deep inside of Mars,” Gregg said.

On a slightly more distant horizon is a possible mission to Europa, an icy moon of Jupiter.

“That will be really, really exciting because we’re pretty confident there’s an ocean under the surface of Europa,” Gregg said.

And in one of the best places in our solar system to look for life, volcanism may be the incubator.

Left: The Kilauea volcano provides a natural laboratory on Earth to study volcanoes found on other planets and moons in our solar system. Photo by U.S. Geological Survey