Why Do Leaves Change Color? 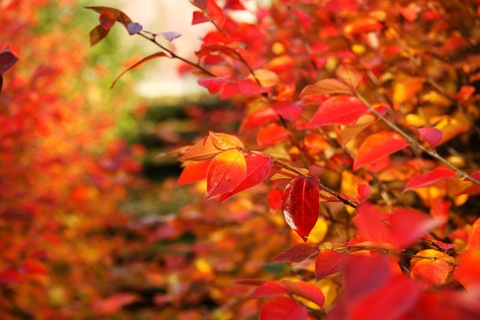 Not long after ad marketing turns from waterparks and beach getaways to maple spice lattes and pumpkin facials, fall colors begin to announce the arrival of autumn — and some years, more loudly than others.

Which leads us to a question we rarely stop to ponder: why do leaves change to dazzling yellows, burnt oranges and deep red colors in the fall? What’s the chemistry behind it all?

Understanding why leaves turn requires understanding some simple basics about tree pigments and photosynthesis. Contained within the leaf cells are disc-like structures called chloroplasts, the food producers within the cell. These are the site of photosynthesis, where light energy is converted to chemical energy. Inside the chloroplasts, light is captured and used to transform carbon dioxide and water into oxygen and sugars.

Chemical energy gets stored in sugars, and “drives the biochemical reactions that
enable plants to grow, flower, and produce seed,” according to University of Wisconsin-Madison chemistry professor and president-elect of the American Chemical Society Bassam Shakhashiri, and this post.

Chlorophyll is the most important pigment, says Robert Moreau, a plant biochemist with the U.S. Department of Agriculture’s research service branch. It absorbs the sunlight, which makes it critical for photosynthesis, and it is responsible for the green in leaves. During the growing season, it acts as a dominant pigment, masking pigments underneath.

But here’s the thing: Chlorophyll is not a very stable compound. It requires sunlight and warm temperatures, which means photosynthesis is going gangbusters all summer. But in autumn, a few things happen. Chlorophyll gets sluggish as nights grow longer and sunlight hours shrink. Also during this time, a corky layer of cells called the abscission layer seals the leaves off from the stem, blocking water flow.

As this happens, the trees break down the chlorophyll and a yellow pigment called carotene get unmasked. Carotenoids and another pigment, xanthophylls, are responsible for the yellow and orange colors in corn, carrots, pumpkins and daffodils, as well as leaves. (Xanthopylls are also found in egg yolk and human blood plasma.) They are present in leaf cells during the growing season, protecting chlorophyll from damage.

“The amounts of carotenoids is pretty much constant, unlike chlorophyll,” Moreau said. So when chlorophyll breaks down, the yellow and orange colors are revealed.

The vivid red and purple colors in scarlet red maples, sweet gum and dogwood trees come from anthocyanins, which also provide the red in cranberries and red apples, and are manufactured in the fall from sugars in the leaf. Some say that trees turn redder when the fall season is particularly bright and cold. (See this Nature News story from 2007.)

The quality of the color show depends on weather, sunlight and soil moisture. “A growing season with ample moisture that is followed by a rather dry, cool, sunny autumn that is marked by warm days and cool but frostless nights provides the best weather conditions for development of the brightest fall colors,” according to the United States National Arboretum. “Lack of wind and rain in the autumn prolongs the display; wind or heavy rain may cause the leaves to be lost before they develop their full color potential.”

Studies from Europe and Japan, where color change and leaf fall is extensively monitored, indicate that trees are flowering and leafing out earlier in the spring and holding their leaves later in autumn, said Richard Primack, professor of conservation biology and plant ecology at Boston University. These changes are linked to warmer temperatures.

Some trees might do better with warmer years, Primack said, but many trees are sensitive to temperature, which means they could get too hot and dry in the summertime and die. “That’s what’s cause for concern,” he said. “In the long term, we might see more southern species in New England. In the short term, it means a lot of the trees might start dying.”