Why do potatoes grow pink slime?

Clostridium puniceum is a bacteria that spews a pink slime on potatoes. Sounds kind of gross, right? But ingredients in the slime may also help fight dangerous antibiotic-resistant germs like MRSA (Methicillin-resistant Staphylococcus aureus).

This pink slime forms when C. puniceum bacteria infect potatoes during wet seasons and under humid storage conditions. It not only infects potatoes, but other root and tuber vegetables, such as carrots and sweet potatoes. (Note: This pink slime isn’t connected to the meat stories that went viral a few years ago)

“The bacterium is ‘soft rotting’ or pectolytic, meaning it breaks down plant cell walls,” said plant pathologist Amanda Gevens at the University of Wisconsin-Madison. “[The microbes] can be found in soils and may be subsequently brought into potato storages on tubers during the harvest process.”

C. puniceum typically thrives in environments with little to no oxygen, so how these bacteria are able to survive and infect potatoes in oxygen-rich environments like these potato storage units has befuddled scientists.

To clear the mystery, microbiologist Christian Hertweck and his team from Germany’s Leibniz Institute for Natural Product Research and Infection Biology examined the chemical makeup of the pink slime itself. 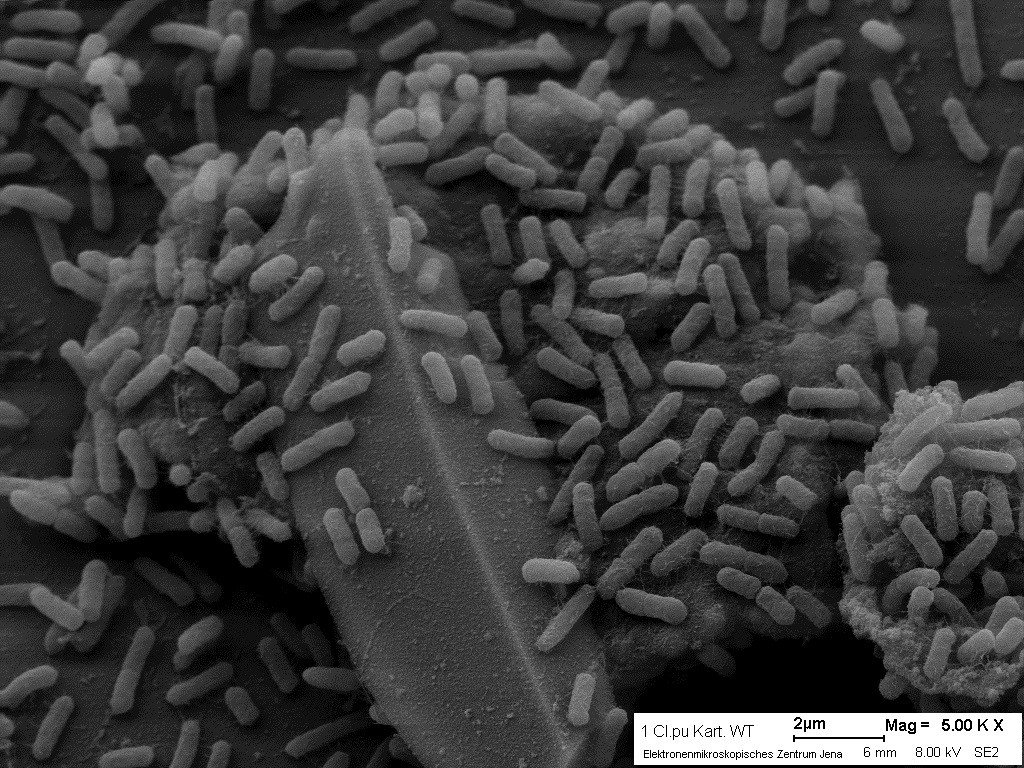 They stab-injected potato tubers with C. puniceum and let them rot for four days. Next, the team extracted samples of the infected potatoes and analyzed the ingredients. They found that the slime contained two primary proteins called clostrubin A and clostrubin B.

As Carmen Drahl described in Forbes, Hertweck’s team had previously identified the gene for clostrubin A in 2014. So for the current study, the researchers genetically removed the clostrubin A and observed how mutant bacteria reacted in an oxygen-rich environment. When they knocked out the clostrubin A gene, pink slime was unable to grow and the bacteria could no longer infect the potatoes. When they added back the Clostrubin A to the mutant strain, sure enough, the pink slime grew again. Like a protective mask or space suit, the clostrubin slime ensured the survival of C. puniceum in hostile oxygen-rich environments, the researchers reported November 5 in the journal Science.

Why should you care?

“These clostrubin compounds are also potent antibiotics and can be used to protect plants from other bacterial pathogens and also to protect humans and animals from various bacterial diseases,” Herwick said. Hertweck’s team found in 2014 that clostrubins were capable of killing infectious bacteria such as MRSA.

The discovery of the clostrubins and their potential to fend off pathogenic bacteria like MRSA is just a starting point. As Drahl notes for Forbes, a team in China has synthesized clostrubin from scratch, so drug makers could avoid the messy step of dealing with slimy potatoes. This may expedite clostrubin’s potential journey to becoming an antibacterial.

But the findings also suggest that impairing clostrubins could help save our potatoes from rot. Potatoes are an extremely important component in the human diet. According to the US Department of Agriculture, potatoes are one of the leading vegetable crops in the United States and the fourth most consumed food crop in the world, after rice, wheat and corn. Every year, pathogens and the diseases they cause can greatly impact the quality and yield of crops.

“Food spoilage is a real issue in our world – and research in this area is critical,” Amanda Gevens said.