Just Ask: Why Does Antimatter Matter? 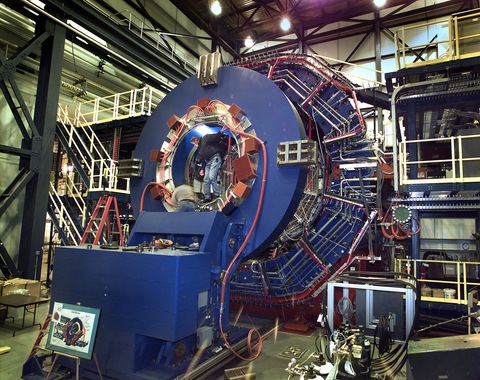 This week, a team of researchers from the Brookhaven National Laboratory announced they had discovered helium’s twin particle, antihelium-4, the heaviest antimatter nucleus observed yet.

So what does that mean, and why do we care?

Antimatter is the yang to matter’s yin. Astrophysicists believe that just after the Big Bang, the universe was packed with equal amounts of matter and antimatter. But when the two come in contact, they annihilate each other. It’s believed that a slight asymmetry gave matter an edge over antimatter, knocking out antimatter almost entirely. Fast forward, and our solar system, our galaxy, our blood and bones and skin are made of matter, not its reverse twin.

“If the moon was made of antimatter, Neil Armstrong would have vanished in an incredible flash,” said Ulrich Becker, a physics professor at MIT.

Scientists don’t have a definitive answer to why matter won the ultimate war, though there is much speculation and an entire field of research built around the question.

A detector, called the Alpha Magnetic Spectrometer, may provide more clues. The 15,000-pound supercooled magnet is slated for space launch aboard the Endeavour shuttle on Friday. This device, which will be attached to the International Space Station after launch, has been designed to track cosmic rays and particles, including antimatter.

Every known particle has in nature an antiparticle — a particle with identical mass, but an opposite charge.

“If you look at the distant galaxy, with light, x-rays, radiowaves, whatever — you cannot say whether this is made of matter or antimatter, because it will emit the same characteristic light,” Becker said. “The only way you can find out is you get a nucleus and find that the nucleus is charged negatively.”

If the nucleus has a negative charge it is, by definition, antimatter. And the only way to find out whether a nucleus is negatively charged is to bend it in a magnetic field, which is precisely what the AMS will do.

“AMS was born on the idea that we need a magnet to distinguish matter from antimatter,” said Becker, also one of the AMS originators. “If we wait long enough without finding [antimatter], we can conclude that there is no antimatter anymore in a certain radius around us. And if it does find antimatter, it will go against the natural inclination that only matter exists.”

Frank Geurts is a professor of astronomy and physics at Rice University and an author of the recent antihelium-4 finding, which was published in the journal, Nature on Sunday. The team created antihelium-4, by smashing gold nuclei and gold ions at near lightspeeds in something called a relativistic ion collider. Collisions at such high speeds generate enough energy to create lots of particles — hundreds of billions of them.

Here’s how: As the heavy nuclei travel at 99.999 percent the speed of light, Einstein’s laws of relativity start to kick in. These particles become more and more massive and the nucleus, originally a sphere, starts to contract and change shape.

“So you’re not colliding spheres anymore — you’re colliding pancakes,” Geurts said. “You dump a lot of energy in a very small volume. And these high energies actually make normal nuclei and normal particles melt into their subparticles, which we call quarks.”

From this soup of quarks and gluons, smaller particles — and antiparticles — are created. But even with hundreds of billions of particles, the probability of creating antihelium-4 is extremely low. That requires two antiprotons and two antineutrons to clump together, a rare occurrence — the subatomic equivalent of a needle in a haystack.

“Helium 4 is a heavier version of helium 3, but that comes with a production penalty,” Geurts said. “It’s increasingly difficult to create that kind of particle. What is beautiful about antihelium-4 is you actually have 4 antiparticles that find each other and coalesce into a light nucleus.”