How Does Salt Battle Road Ice? 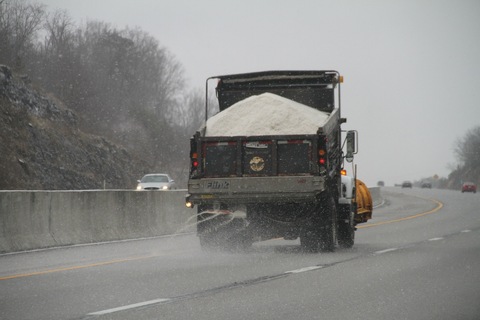 Since as early as the 1930s, a variation on simple table salt has been used to keep wintry roads from getting dangerously slippery.

The mechanism is simple: When liquid water freezes into ice, the loose water molecules arrange themselves into a more ordered structure. Salt slows this process. “Any impurity disrupts water molecules’ ability to find each other and to organize in the right way,” said Joel Thornton, professor of atmospheric sciences at University of Washington in Seattle. “When you add salt to the road, what you’re doing is you’re adding impurities to the water so you disrupt the water’s ability to form ice.”

As salt dissolves in water, it breaks down into two ions: one sodium ion and one chloride ion per sodium chloride molecule. These ions are foreign particles in the water, and they disperse water molecules, pushing them apart, and making it harder for ice to form. As salt is added, the freezing point drops.

“So instead of freezing at 0 degrees Celsius, it might freeze at -4 degrees Celsius, depending on how much salt is dissolved in the water,” said Kenneth Smith, a retired analytical chemist and chair of the American Chemical Society’s Division of Environmental Chemistry. “The more salt is dissolved in the water, the more the freezing point is depressed.”

Sodium chloride is commonly used, as is magnesium chloride or calcium chloride, both of which dissociate into three ions, lowering the solution’s freezing point even further.

Nearly 60 million tons of salt are applied per year for deicing purposes, according to the U.S. Geological Survey. In snowy cities, highway departments often use dump trucks with chutes and plates that rotate to spew and disperse chunky rock salt onto the roads. Some cities pre-dissolve salt in water and then spray it out.

There are environmental concerns. Saltwater runoff can contaminate soil and kill plants along the edge of the highway. Salt can leach into groundwater and contaminate rivers and lakes. Electrolytes increase the rate at which metals will rust, leading to rusty cars.

“In some of the eastern states, smaller communities will simply use dirt and rock, which increases traction, but leaves material on the roads, and that material gets thrown up into the windshields of your car,” Smith said.

Thornton’s team is also studying the extent to which the components of road salt contribute to atmospheric pollution. High levels of chlorine compounds have been detected in the Boulder, Colo. atmosphere, far from the coastline, where sea spray would be a likely culprit.

“How these arise in atmosphere is uncertain, but we know they exist,” Thornton said. “While we don’t have any direct evidence that road salt was the source of the chlorine, it’s logical that road salt would get into the air.”