On Wednesday, Hurricane Michael slammed into the Florida Panhandle with winds of 155 miles per hour, two mph shy of being a Category 5 storm. Based on barometric pressure, it was the third strongest storm to ever hit the United States and the worst the country has seen in 50 years.

Yet five days ago, the storm was a meager tropical depression teetering toward collapse. America’s best forecasters originally expected Hurricane Michael to cruise toward the U.S. as tropical storm and, at worst, arrive as a Category 1 storm. Dangerous for sure, but not nearly as destructive as Michael came to be.

After making landfall Wednesday near Mexico Beach, Florida, Michael shattered buildings and toppled trees, and killed two people—a man in Tallahassee, Florida, and a 11-year-old girl in southwest Georgia. Nearly a million people have lost power in Florida, Georgia, Alabama and South Carolina. Flooding extends as far north as North Carolina. Mayors along the Gulf Coast said they were worried that their citizens did not have time to evacuate.

Van Johnson, the mayor of Apalachicola, a Florida city along the Gulf of Mexico, told the PBS NewsHour that as many as “20 to 30 percent” of local residents did not evacuate the Florida City, a sentiment echoed by Panama City mayor Mike Thomas.

“Some people are just concerned about leaving. And when you leave and everybody leaves, [then] there’s no hotels around, there’s no gas around,” Thomas told the NewsHour’s Amna Nawaz. “This thing happened so quick.”

Here’s why Hurricane Michael took so many by surprise and what legacy the storm will leave behind.

Wind shear should have killed the storm. Why did it survive?

“The thing that caught me and a lot of people off guard was that Hurricane Michael intensified pretty rapidly on Sunday into Monday,” Philip Klotzbach, an atmospheric scientist at Colorado State University, told the PBS NewsHour. “It was in an environment with a lot of shear [due to] pretty strong westerly winds. Those typically inhibit development, or prevent the storm entirely.”

If you think about a hurricane as a toy top, spinning in the seas, then wind shear is a huge wall of air coming to bash into it and knock it over. Large amounts of shear tilt a hurricane, preventing it from forming a uniform column and intensifying.

The wind shear was so high (approximately 20 miles per hour) that it punched a hole in the cyclone’s eyewall—the ring of thunderstorms at the heart of Michael.

“The wind shear wasn’t quite enough to disrupt the storm [but] it was enough to keep the eyewall from solidifying,” Bob Henson, a meteorologist with Weather Underground, told the NewsHour.

Here’s what’s so strange. Most hurricanes do not rapidly intensify to major strength—above Category 3—until after their eyewalls have fully solidified or closed. But through Tuesday, Michael’s eyewall remained open as the storm swelled into a Category 3.

While the satellite structure of #Michael continues to look ever more impressive, recon is still finding that the eyewall is not closed in the SW quad. This indicates convection is still weakening before it reaches the upshear flank despite a seemingly textbook IR presentation. pic.twitter.com/R6wZLfd80q

Once the eyewall closes, it goes through what’s called replacement cycles. The initial eyewall shrinks and then a larger eyewall develops around it. “It’s kind of like the opposite of a snake shedding its skin,” Henson said.

But this never had a chance to happen with Hurricane Michael because the eyewall took so long to solidify.

“Ironically, if Hurricane Michael had strengthened a couple of days earlier, it might have not come ashore as a Category 4,” Henson said. “It might have embarked on one of these eyewall replacement cycles, weakened and not recovered.”

It’s unclear what contributed to Michael’s fortitude, both against wind shear and in terms of its delayed intensification. Both Klotzbach and Henson cited the contribution of the Gulf’s warm waters, which can beefen up a storm’s winds and rains. Michael passed through a patch of gulf water that was about 2 to 4 degrees Fahrenheit hotter than normal.

Many outlets have been quick to tie the storm’s hardiness to global warming and climate change. Michael formed late in the hurricane season and became the strongest October hurricane to hit the continental U.S. in history. There is evidence that major storms—ones above Category 3—have become more frequent since the 1980s, and The Guardian went as far as blaming victims of the storm, because they voted for climate deniers.

But at the moment, the reported links between Hurricane Michael and climate change are murky, at best. 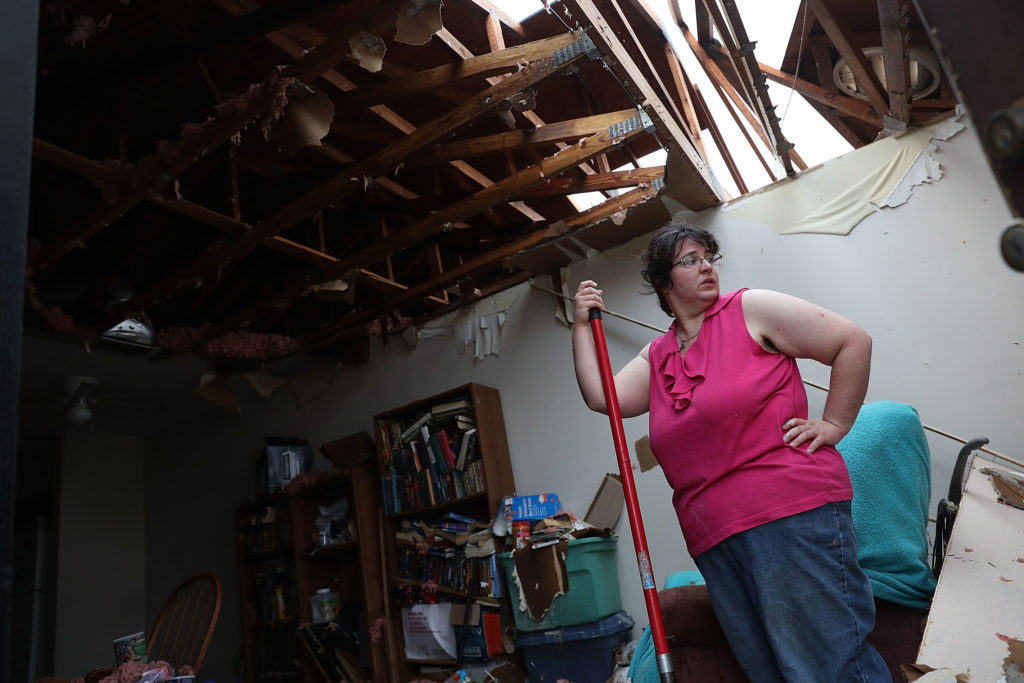 Amanda Logsdon begins the process of trying to clean up her home in Panama City, Florida after the roof was blown off by the passing winds of Hurricane Michael. Photo by Joe Raedle/Getty Images

For one, Klotzbach said, there were elements other than climate change at play. When you encounter as much wind shear as Michael did, even if the waters are warm, a cyclone will not usually form. He said Michael’s physical size, with its miles-long winds, may have buffered the shear, shielding it from the strong winds that may have otherwise knocked it over. Henson added that Michael happened upon a nontypical, arc-shaped wind shear that may aided the spinning flow at the top of the storm.

“What we can say now is that as the climate warms, we’re going to have water warm enough to support a storm like Michael more often and later in the year.”

The warm weather, no doubt, played a role. First, the Gulf and the eastern U.S. have experienced a hot autumn; Florida and surrounding areas recorded their warmest Septembers on record, Henson said.

Normally, the polar jet stream would have pushed south by this time of year, spreading cold fronts into the northern Gulf Coast. These kinds of fronts cool off and shred cyclones. But the polar jet stream remains trapped in the north. Meanwhile, the subtropical jet stream—which runs further south across the Caribbean—abated right as Michael was born.

Scientists will need time to assess whether or not climate change influenced Hurricane Michael, but Henson said these patterns in ocean waters and jet streams should be expected in a warming world.

“What we can say now is that as the climate warms, we’re going to have water warm enough to support a storm like Michael more often and later in the year,” Henson said.

But any break from the blooms is likely temporary, according to Florida International University biologist Tom Frankovich. In the short term, Hurricane Michael’s winds could push some red tide areas out to sea while concentrating others.

“[Blooms] may break up as the hurricane approaches the coast because of the counter-clockwise current situation,” Frankovich said. “You may see drastic changes on either the side of a hurricane, like an increase on the east side where offshore water’s blowing in and decrease where the inshore water is blowing out.”

An influx of colder water stirred up by the hurricane could also inhibit blooms in Michael’s aftermath. But Frankovich warned high amounts of runoff spurred by the storm’s rainfall could spell trouble in the long-term.

“There’s going to be a lot more runoff and stuff coming through the groundwater that’s going to be filled with land-based nutrients that’s very likely to fuel future blooms,” Frankovich said.

Another impact of Michael’s landfall? Elevated levels of the brevetoxin, the noxious chemical produced in the Karenia brevis cells responsible for red tide. Frankovich said wave action during the storm itself likely caused larger than normal releases of the toxin by tearing apart the dinoflagellates’ cells.

“All the toxins that are inside these cells are going to be broken apart and brought into the atmosphere as the result of the wave action and all that wind … So there’s is probably going to be a quick shot of these aerosols in inland, but also a possibility that those will also quickly be spread out over a large area.”

Fortunately, most individuals who could have inhaled the toxin probably weren’t outside when the Category 4 hurricane came ashore, he said, though “It’s probably wise to stay out of the storm for a lot of other reasons that are more important than brevotoxin in the air.”

Left: Kathy Coy stands among what is left of her home in Panama City, Florida following Hurricane Michael. Photo by Joe Raedle/Getty Images