Over the last year, Florida has experienced a double whammy of algae blooms — one offshore and one closer to home.

A red tide — a choking cluster of toxic algae — floating off Florida’s southwest coast has killed 115 manatees, more than 350 sea turtles and hundreds of tons of fish since it began last October. Then, starting in early June, harmful blue-green algae began to flood Lake Okeechobee — the largest body of fresh water in Florida. At one point this summer, Lake Okeechobee’s waters were 10 times too toxic to touch.

Thanks to these combined harmful algae blooms, Florida by some estimates could lose up to $2 trillion in tourism and business revenues.

Based on the timing and location of the two blooms, it is tempting to tie them together. Lower Florida has plenty of warm water and agricultural nutrients like nitrates and phosphates, both of which can contribute to the growth of the organisms involved in these blooms.

Yet their origins contrast as much as their colors. While blue-green algae appear to spawn in direct connection with the nutrients poured into Lake Okeechobee, it is unclear why Florida’s red tide forms, and why they make toxins in the first place is one of the great mysteries of marine science.

Let’s start with one major misconception about red tide. It isn’t red.

Under a microscope, one of these phytoplankton looks golden-brown, but when millions collect into a bloom, our eyes can mistake this mass as being red.

Under a microscope, one of these phytoplankton looks golden-brown, but when millions collect into a bloom, our eyes can mistake this mass as being red. In truth, the color of these blooms can range from burgundy to yellow, and this optical illusion applies to phytoplankton species that do not produce toxins.

“Just about all phytoplankton look red to our eye at high enough biomass,” Clarissa Anderson, a biological oceanographer at the Scripps Institution of Oceanography, told the PBS NewsHour. “It is not connected to any special pigments but more a function of the cone [cells] in our eyeballs and the way things shift near red wavelengths. I never use the term ‘red tide’ for this very reason, since we can easily have a benign organism blooming nearshore that discolors the water red.”

There are two main types of phytoplankton: dinoflagellates, which swim with whip-like tails, and diatoms, which are immobile and travel via ocean currents. In Florida and along the Gulf Coast, the red tide of everyone’s nightmares is caused by a dinoflagellate called Karenia brevis. 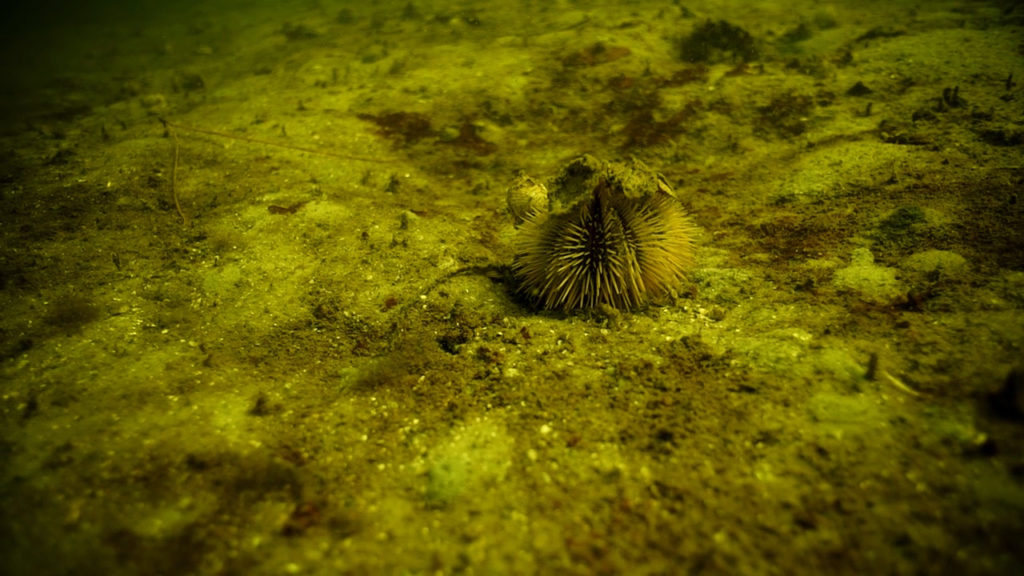 Karenia brevis also stands out because it not only feeds off the sun, but can consume other organisms. This latter dietary habit may explain why Karenia brevis is so toxic.

Red tide blooms spawn 10 to 40 miles offshore, outside of direct exposure to agricultural runoff. But ocean currents can push red tide closer to shore, where runoff can promote their growth, which may explain Florida’s current bout has lasted so long.

Why is red tide toxic?

Karenia brevis’ poison of choice is called brevetoxin — one of the weirdest compounds in nature — and is unlike any made by wildlife on land.

“Dinoflagellates — not just Karenia but many others — produce toxins that are these really exotic molecules,” said Jeffrey Wright, a marine biochemist at the University of North Carolina Wilmington who specializes in chemicals made by marine organisms.

Nature uses a variety of building blocks to support life — carbon, hydrogen, oxygen and nitrogen, to name a few. Sometimes our cells piece together these basic elements to produce bigger “biological Lego” blocks, like the amino acids that construct our proteins.

Wright said Karenia brevis calls on a Lego called acetate — a very simple molecule made of a couple carbon atoms — to build giant compounds like brevetoxin. Karenia brevis assembles these acetate blocks into mesmerizing loops (like the one seen below).

“Brevetoxins are what we call cyclic polyethers, and if you see the structure of a cyclic polyether, you would instantly recognize another one,” Wright said. “These are some of the biggest non-protein compounds ever produced, that we’ve ever found in organisms.”

Karenia brevis makes brevetoxin using a process that’s similar to how humans make fats inside of our bodies — except dinoflagellates make sloppy engineers.

“All the fatty acids that you and I make for example, or any organism makes, are put together with these little two-carbon [acetate] units in a very orderly fashion,” Wright said. “The unusual feature of dinoflagellates, which use the same building blocks, is that they put them together in a disorderly fashion.”

How exactly Karenia brevis and other dinoflagellates acquired the skills to produce chemicals like brevetoxin is a huge mystery. Karenia brevis’ genome is 33 times larger than the human genome, and scientists know very little about its makeup because it has not yet been sequenced.

“They’re pretty much the Martians amongst us on planet Earth. They’ve got a very bizarre genome organization and structure,” said Bradley Moore, a marine chemical biologist at the Scripps Institution of Oceanography. “A lot of traditional genome sequencing approaches don’t happen to work well with dinoflagellates sequences,” which has hampered an understanding of what genes are involved in a toxin synthesis.

Why do harmful toxins develop in the first place?

Without this genetic story, it is hard to know why Karenia brevis produces a giant harmful toxin in the first place. Karenia brevis is always making brevetoxin, but its accumulation is confined to the insides of its cell.

Brevetoxin is only released into nature when the force of waves cracks opens a Karenia brevis cell or when the dinoflagellate is eaten by another beast. Once released into nature, Brevetoxin attacks our cells by opening up our sodium channels — a set of protein gateways embedded in the cell membranes of other organisms.

Most of the notable victims of red tide — humans, manatees, dolphins and sea turtles — evolved to tightly control what can and cannot enter their cells. The uncontrolled influx of sodium wreaks havoc on a body. Nerves fire uncontrollably, and immune systems get thrown out of whack by brevetoxin. In humans, this assault manifests as gastrointestinal illness if tainted fish are consumed. If brevetoxin is inhaled, it can also exacerbate respiratory diseases. 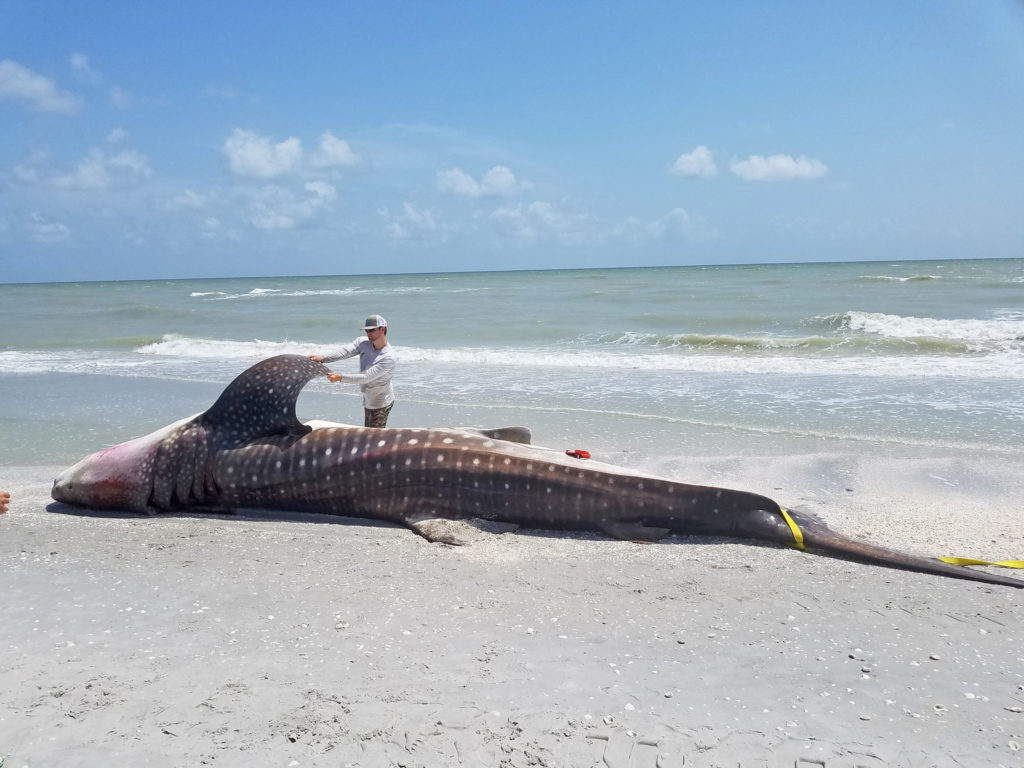 This potent toxin also knocks out microscopic animals that graze on Karenia brevis and other phytoplankton, said Anderson, who studied these toxins to develop a new way to forecast other types of algae blooms three days in advance.

“There’s a lot of mystery surrounding the function of [dinoflagellate toxins], but sometimes they seem to be produced in order to quell competition from other species of phytoplankton and algae,” Anderson said. She compared this defense mechanism to the way eucalyptus trees produce allelopathic compounds to stop other nearby plants from growing.

To this point, Karenia brevis ramps up its production of brevetoxin as the environment in its algae bloom becomes crowded. As the bloom grows, it begins to consume all of the nutrients in this water, and this depletion counterintuitively throws Karenia brevis into overdrive.

“First, they grow there like gangbusters and then, as they start to deplete in nitrogen they produce much more of these compounds,” Wright said. “You can double or even over more than double the concentration of the toxins themselves by depleting nitrogen,” and by depleting phosphorus, too.

When do red tide and blue-green algae behave the same way?

This behavior is where red tide off Florida’s coast and blue-green algae in Lake Okeechobee start to overlap.

“When either of these types of organisms bloom, they are described as Harmful Algal Blooms (HABs),” said William Gerwick, a biochemist at the University of California San Diego who combs through marine chemicals to discover drugs. “But while called the same name, they are in fact due to very different organisms and produce different toxins.”

Nutrient restriction — in this case, the loss of phosphorus but retention of high nitrogen — causes blue-green algae to make microcystin, one of four major toxins made by blue-green algae blooms in the U.S.

Similar to how brevetoxin behaves in a red tide, Gerwick said microcystin may be a way to signal overcrowding among blue-green algae.

But brevetoxin and microcystin attack in different ways. Microcystin is unique in that it causes the cells of other organisms to implode. It targets an enzyme crucial for our powerhouses inside our cells — mitochondria — which causes our cells to commit cellular suicide, otherwise known as apoptosis. This process is particularly harmful to livers.

Blue-green algae blooms are so dangerous because they are also made of cyanobacteria, which can essentially fall apart — or lyse — when they become stressed. But some types of cyanobacteria — like those found in the Florida lake — intentionally release their toxins into the environment.

Left: We asked Richard Bartleson, an ecologist and environmental scientist with the Sanibel-Captiva Conservation Foundation, why this year’s red tide is so bad and when it might end. Video by Nsikan Akpan and Julia Griffin