Your body would never get used to the perfect painkiller, says Susruta Majumdar, a chemist at Memorial Sloan Kettering Cancer Center. So unlike the case with common opioids such as morphine or Oxycontin, you would not need to take ever-increasing doses to relieve the same amount of pain. The ideal analgesic would not have the high risk of addiction, withdrawal or fatal respiratory slowdowns that have turned opioid abuse into a massive epidemic. The holy grail of painkillers would not induce the seductive euphoria of common opioids or their less-pleasant side effects like itching or constipation.

A painkiller with just one of these properties would be great, but Majumdar thinks he has stumbled onto a class of chemicals that might have them all. They are found in kratom, a plant that the U.S. Drug Enforcement Administration intends to effectively ban from the U.S. in an emergency move as early as September 30. Without legal access to it, research on some of the most promising leads for a better painkiller may grind to a crawl.

Kratom comes from the Mitragyna speciosa tree native to parts of Southeast Asia, where people chew the leaves for a light, caffeine-like jolt of energy or as a traditional medicine for ailments ranging from diarrhea to pain. Kratom has been illegal since 1943 in Thailand, where it is believed to be addictive. Case studies have suggested that suddenly stopping regular kratom use may lead to withdrawal symptoms—but they are widely considered milder than those associated with opioids.

The DEA plans to place kratom and its psychoactive ingredients in the agency’s most restricted controlled substance category, Schedule I, on September 30 at the earliest.

Majumdar first learned about kratom via a Web search a couple of years ago. By then there were stories in the West about how kratom tea could be used to manage pain—and to mitigate brutal opioid withdrawal. That caught Majmundar’s attention, and he found research from the 1970s that described some of the basic biochemistry of kratom’s two primary psychoactive compounds, mitragynine and 7-hydroxymitragynine, as well as one more molecule called mitragynine pseudoindoxyl, which is produced when kratom ferments.

“We got excited because the chemical structure is almost completely unrelated to that of commonly used opioids,” says Andras Varadi, a colleague of Majumdar who is a medicinal chemist at Columbia University and Sloan Kettering.

When Majumdar and his team started studying the compounds in the laboratory, they realized all three molecules were binding to the mu-opioid receptor—one of three known kinds of opioid receptors in the brain—in an unconventional way. Think of this receptor as the ignition to a “hybrid car,” Varadi explains, and the opioids that bind to it as keys.

A typical opioid such as morphine turns on the “electric engine,” and that leads to a desired effect like pain relief. But it also starts up the “gas engine,” causing negative side effects. The mitragynine molecules from kratom seem to activate mostly the “good” systems, leaving behind the unwanted effects yet keeping pain relief.

Some Kratom purchased in the U.S. has been found to be adulterated with other compounds, including common opioids like hydrocodone.

Scientists have been trying to develop next-generation drugs with this property. There is one candidate, pharmaceutical company Trevena’s TRV130, in clinical trials now. That’s part of what makes kratom exciting to researchers, says Laura Bohn, a biochemist at the Scripps Research Institute who was not involved with this work. “The more chemical structures you have [with this property] the more you can say, ‘here’s the right features of these, and let’s impart that into our drug development.’”

Majumdar noticed that the fermented-kratom compound mitragynine pseudoindoxyl—unlike most other drugs in development—also blocks off another opioid receptor, the delta receptor. “That’s when we got excited,” Majumdar says. Past experiments have shown that delta receptor blockers could reduce morphine tolerance and withdrawal symptoms in mice. “There were signs that delta antagonism is good,” Majumdar says. And if mitragynine pseudoindoxyl could both block the delta receptor and produce favorable behavior on the mu receptor, Majumdar says it might be better than any other pain drug science is currently investigating.

In an attempt to find out about these blocking capabilities Varadi injected mice with mitragynine pseudoindoxyl twice a day for a month. Then he checked if they could feel pain, using techniques such as putting them on a hot plate. In such experiments morphine usually loses its painkilling effects after five days. But after 30 days on a consistent dose of mitragynine pseudoindoxyl, the mice still showed numbness to pain.

“It was the most exciting experiment I’ve ever done,” Varadi says. In other experiments Varadi and Majumdar reported that the mice exhibited few withdrawal symptoms from mitragynine pseudoindoxyl—and they displayed no indication that they actually enjoyed taking the drug. “[This is] early promise it’s nonaddictive,” Majumdar says. His team reported its findings in The Journal of Medicinal Chemistry last month. 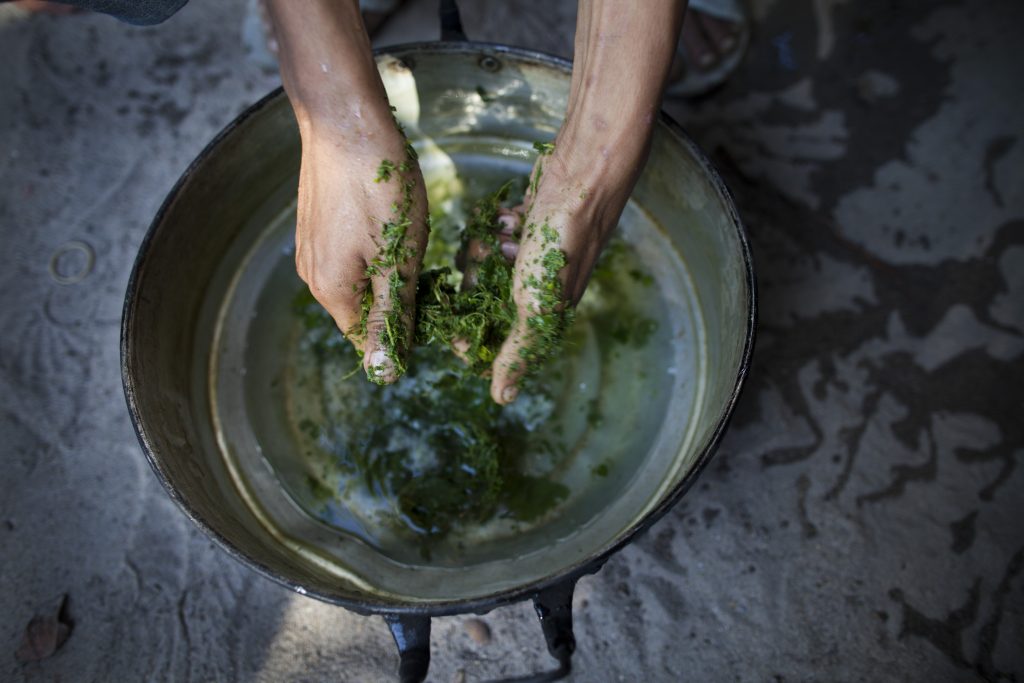 Varadi says his results indicate that mitragynine pseudoindoxyl may have the peculiar ability to both activate the mu receptor—possibly making it a powerful painkiller that also reduces addictive and potentially deadly side effects—as well as lower withdrawal and tolerance. “It’s a double whammy,” Varadi says.

Although the kratom compounds have yet to be clinically studied in humans, Andrew Kruegel, a pharmacologist at Columbia who was not involved in Varadi’s study, says the results hold promise for better designer painkillers.

“Those compounds alone may already be superior to codeine and oxycodone. At a minimum, if you can get rid of respiratory [problems] then you can save thousands of lives,” Kruegel says. “But we can tweak their properties to make them even better than the natural starting point.” Or they would do so if the research were able to legally continue, he adds.

The DEA plans to place kratom and its psychoactive ingredients in the agency’s most restricted controlled substance category, Schedule I, on September 30 at the earliest. That would place it in the same group as heroin, ecstasy and marijuana. All Schedule I drugs are supposed to have a high potential for abuse and harm, and to have no medical use.

Scientists can obtain a license to study Schedule I drugs but they are hard to acquire and significantly slow down research.

Scientists can obtain a license to study Schedule I drugs but they are hard to acquire and significantly slow down research, says Chris McCurdy, a kratom researcher at the University of Mississippi. “I don’t oppose it being regulated, I just oppose Schedule I,” he says. “That’s where the frustration comes in, realizing you have to shut everything down because we don’t have a Schedule I license.”

At the moment, neither do several other kratom researchers, including Majumdar. “We’ll have to destroy all our samples in the lab,” Kruegel says.

The DEA’s emergency scheduling of kratom will expire after two years if the agency does not move to make the scheduling permanent. But for that to happen, Kruegel thinks scientists will likely need to show further proof that kratom is medically useful. “That we’ll have any progress in the next two years is very unlikely,” he says.

Russ Baer, a spokesperson for the DEA, says the reason for putting kratom and its psychoactive ingredients in the most restrictive drug category is to protect public safety and stop misuse. “Independent of the DEA, the Food and Drug Administration has issued a number of public health warnings and import alerts, most recently about July 2016, and concerns they have about kratom representing a health risk,” he says. “And it’s been on our radar for awhile as a drug of concern.”

A DEA announcement cited 15 kratom-related deaths between 2014 and 2016, and there have also been accounts of kratom being misused.

“One of my [research] partners has treated people in the emergency room who would dissolve and then inject kratom extract,” says Ed Boyer, a professor of emergency medicine at University of Massachusetts Medical School and a kratom researcher. Most of these incidences of abuse probably involved other substances as well, he adds.

Some Kratom purchased in the U.S. has been found to be adulterated with other compounds, including common opioids like hydrocodone.

Mitragynine seems to be a fairly weak drug on its own, Majumdar says. It is about 55 times less potent than morphine in terms of pain relief. “I did drink kratom tea,” he says, “and I felt nothing.” Another compound, 7-hydroxymitragynine, is about six times more potent than morphine—but Majumdar says it occurs in such small amounts in the plant that it is probably not responsible for most effects experienced by consumers of unaltered, natural kratom.

The DEA’s decision on kratom has even begun to draw critical attention from U.S. lawmakers. Rep. Mark Pocan (D–Wis.) has urged Congress to sign a letter asking the DEA to delay making it a controlled substance. But the impending ban has left an especially bitter taste with many researchers who feel there is already ample evidence the plant has clear medical potential.

“It is frustrating,” Bohn says. “I totally empathize with trying to prevent misuse, but it has to be thoughtful and protective. For us, [kratom] is a valuable, valuable research tool.”

This article is reproduced with permission from Scientific American. It was first published on Sept. 27, 2016. Find the original story here.

Left: Capsules of the drug Kratom are seen on May 10, 2016 in Miami, Florida. The herbal supplement is a psychoactive drug derived from the leaves of the kratom plant and it's been reported that people are using the supplement to get high and some states are banning the supplement. Photo by Joe Raedle/Getty Images