Your gym mats may be breeding antibiotic-resistant germs

We spend a tremendous amount of time at the gym in close contact with all kinds of surfaces — yoga mats, treadmill handles, basketball court tiles and aerobics platforms.

As you have likely noticed, these items are often covered in dust, and this dust may be filled with antibiotic-resistant microbes, according to a study published Tuesday in the journal mSystems. A survey of 42 athletic facilities in Oregon — private fitness clubs, public recreation centers and studios for dance, yoga and martial arts — found living germs that were resistant to common antibiotics in all but one facility.

Here is the wild part. These microbes may not have developed this resistance because of the overuse of antibiotics, but because of a chemical commonly used in sanitizers: triclosan.

The team found the athletic facilities with the most triclosan in its dust had the highest abundance of antibiotic-resistant microbes.

Though the U.S. Food and Drug Administration banned triclosan from soaps and body washes in Sept. 2016, manufacturers continue to use the ingredient in everyday goods like cleaning supplies, deodorants and toothpaste.

The team found the athletic facilities with the most triclosan in its dust had the highest abundance of antibiotic-resistant microbes. They didn’t find deadly bacteria like Methicillin-resistant Staphylococcus aureus (MRSA), but they discovered enough benign, drug-resistant microbes to raise the specter of gym dust being contaminated with hazardous organisms elsewhere.

Gross, right? Well, before you launch a campaign to burn your gym’s yoga mats, there are few things that you need to know about the scope of the findings — plus some simple tips to avoid dust and germs during your next gym visit.

Though the dust collection for these experiments happened entirely in Oregon, the investigation was led by Erica Hartmann, an environmental engineer and microbial ecologist at the Northwestern University in Chicago.

Hartmann enlisted the help of architecture students at the University of Oregon’s Biology and the Built Environment Center, a collaborative unit of evolutionary biologists, ecologists and architects, where Hartmann used to work and started this study. This center examines how the design of human-made structures influences microbe populations in the environment.

Five years ago, these students grabbed some vacuums and headed to 42 athletic facilities, where they sucked up dust from hallways, offices and athletic spaces.

“We got the backpack vacuums that made us look kind of like Ghostbusters,” Hartmann told the PBS NewsHour.

After collecting the dust samples, they divided them into thirds. One third went toward conducting analytical chemistry — to assess the presence of antimicrobial chemicals and their quantities. Another third was analyzed to see whether any microorganisms would grow out of it. 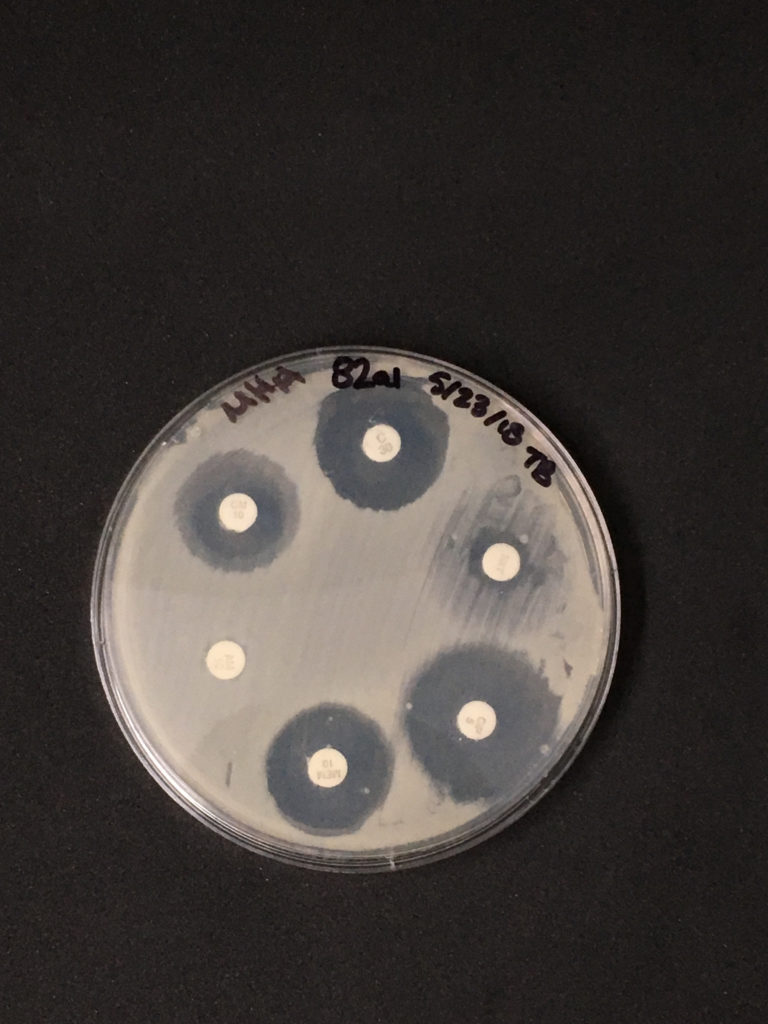 Bacteria isolated from gym dust growing on a petri plate. The photo shows a disc diffusion test, where each disc contains a different antibiotic. The discs covered in growing microbe contain bacteria that are resistant to antibiotics. Photo by Taylor Brown/Northwestern University

The final third was saved for metagenomics, a laboratory technique that sifts for genetic material in environmental samples in order to identify organisms living or traveling through that particular location. In the past, metagenomics could only offer a picture of microbes living in a germ-dense location.

“The microbiomes that we know the most about are associated with the human gut because there’s just bajillions of microbes, and it’s pretty easy to get samples,” Hartmann said, referring to fecal matter. Human guts contain about 10 times as many antibiotic-resistant microbes relative to what she found in gym dust.

But “with buildings, it is much more technically challenging because you might need to basically suck all of the air out of a room and run it through a filter to get enough microbes.”

Luckily, metagenomics and its DNA sequencing procedures have advanced enough in the past few years, and the method is now sensitive enough to uncover microbial populations in samples like dust.

Dust happens to also serve as a final resting place for many of the chemicals that humans spray, wipe, exhale and generally emit on a daily basis.

Hartmann and company learned the highest concentrations of all antimicrobial chemicals in dust occurred in gym spaces and moist locations. Rooms with rubber matting and carpet floors had higher levels of these compounds as well. Offices and hallways were less of an issue.

Though an antimicrobial chemical called methylparaben was the most common, the team found antibiotic-resistant microbes most often corresponded with the presence of triclosan and its cousin triclocarban.

What are antimicrobials anyway?

Here we might want to pause and review the difference an antimicrobials, antibiotics and a third realm called antibacterials. An antimicrobial is the umbrella term for any chemical that kills or stymies the growth of any microorganism, such as fungus, mold or bacteria. An antibacterial is a type of antimicrobial, specifically any chemical built to destroy bacteria. An antibiotic is a type of antibacterial that most often refers to the medical drugs — the compounds that we humans ingest, inject, rub or otherwise apply to our bodies to stop bacterial infections like E.coli or strep throat.

Here’s why this matters. Triclosan is an antibacterial that we use to disinfect surfaces in the environment, but Hartmann’s study found that its presence in dust may be leading to microbes developing resistance to the antibiotics that put into our bodies.

That’s somewhat mind blowing because typically if a germ is exposed to a chemical like triclosan in a lab, it should develop resistance to triclosan. But in gyms, these germs appear to be learning how to avoid other unrelated compounds, namely medically relevant drugs.

What this means and why it might be happening

Though the mere presence of triclosan and these heartier germs in the same place doesn’t absolutely prove that triclosan in dust caused the antibiotic resistance to develop in the places where these microbes were found, Hartmann said the association is highly suspicious.

…just because we stopped using it in one context (hand soap), doesn’t mean that it is just going to disappear from the environment.

These earlier lab-based studies may have found that a gene grants resistance to an antibiotic medicine, when in the wild, the gene’s actions are broader and can have multiple functions — like also providing protection against a substance like triclosan. So, when germs in the wild get exposed to triclosan, that means it’s possible that they can develop resistance to it and to a medicine at the same time.

Another theory revolves around the fact that antibiotic-resistant genes are mobile — meaning they can be traded between individual microbes like baseball cards. “It could be that there’s a gene that helps resist triclosan, but trading this gene sends along neighboring genes that confer resistance to other antibiotics.”

Don’t toss your gym membership yet. Hartmann’s study doesn’t pin down exactly how triclosan and these antibiotic-resistant organisms landed in these gyms.

“The main thing the study can’t tell us is how this all happened.”

“The main thing the study can’t tell us is how this all happened,” said Jordan Peccia, an environmental engineer at the Yale School of Engineering & Applied Science, who specializes in the exploration of indoor microbiomes and how they relate to our health. “It can only point to an association, but it can’t tell us if that’s actually happening inside of a building.”

Remember: Triclosan may be banned in soaps, but it is still pervasive in consumer products. So, Peccia said these bacterial adaptations could be happening on the skin of gym-goers who are using triclosan products at home or are exposed to other antibiotics constantly due to an illness.

“And then they could be just shedding antibiotic-resistant microorganisms on the surfaces of gym mats or into the air of buildings,” said Peccia, who described Hartmann’s study as somewhere between an “important step for the field” and “groundbreaking” because it revealed so much about microbial ecology in buildings. 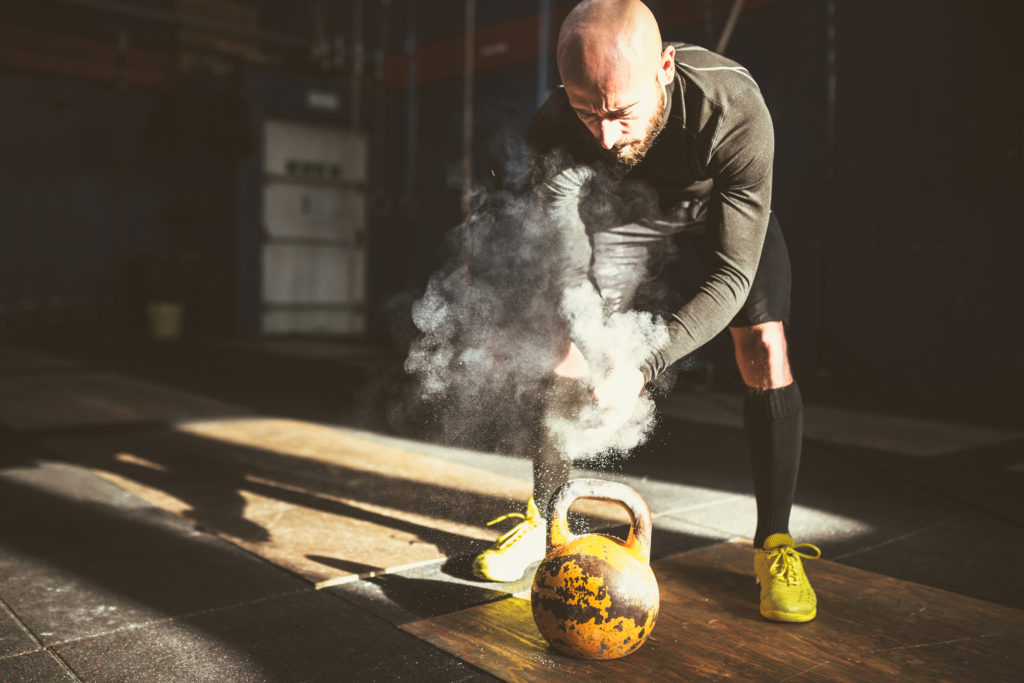 These antibiotic-resistant bacteria could have developed on human skin before they shedded into gym dust. Photo by franckreporter/via Getty Images

But he raises this alternative scenario because he suspects that gyms are generally too dry for bacteria to be active or evolve antibiotic-resistance.

“In a gym environment, which might be around 50 percent humidity, microorganisms aren’t necessarily dead but it’s very stressful to them. They kind of shut down and are relatively dormant,” Peccia said. “In a normal building, most microorganisms are not active … they’re not responding to chemicals.”

So the open question is do antibacterial spray bottles filled with triclosan provide enough moisture to awaken these bacteria and trigger the development of antibiotic resistance? Or maybe our sweaty palms on treadmill railings or “swamp butts” on yoga mats provide the necessary moisture? Peccia’s lab has found that fungus and molds can thrive at 50 percent humidity, and this appears to involve metabolic pathways that were enriched in the bacteria identified in Hartmann’s study.

Lab-based studies show exposure to triclosan can boost multidrug resistance leading to hazardous strains of bacteria, but it is unclear if this also happens in the general environment. But both Hartmann and Peccia think that antibiotic resistance is a big enough public health threat in places like hospitals that it’s worth just assuming that this is an issue for gyms right now. 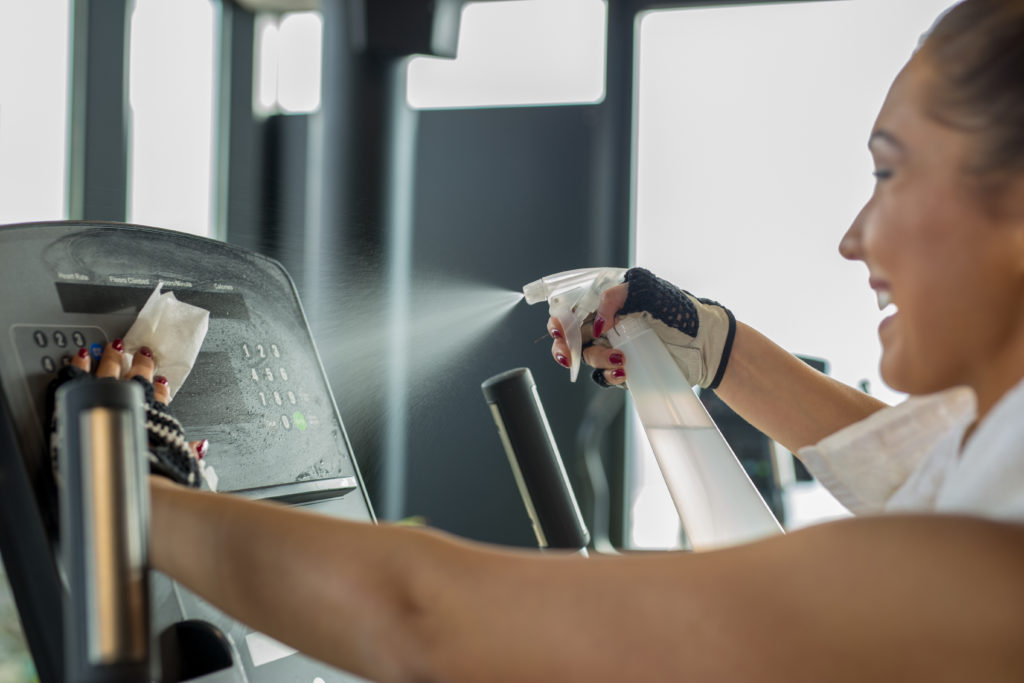 Before you use that spray bottle, you should probably ask what’s in it? Photo by Marko/via Stock Adobe

Triclosan, Hartmann said, has all of the characteristics of what’s called a “persistent organic pollutant” — meaning just because we stopped using it in one context (hand soap), doesn’t mean that it is just going to disappear from the environment. Her lab is currently assessing if other disinfectants can spawn this tainted dust and which surfaces inside of a gym contain the highest amounts.

Until then, people should avoid using triclosan and potentially similar sanitizers because “there’s so little evidence justifying the use of these chemicals in the first place,” she said.

If you’re one of those gym attendees who likes to use the cleaning sprays (this is me), she said first ask an attendant: “What’s in that spray?” If it’s just water, then go to town. But if it has triclosan or benzalkonium chloride, which is more common in gyms these days, she said think twice before spraying it if you’re worried about antibiotic resistance. You could always just wipe the machine down with a plain towel.

If you’re nervous about cleaning your hands — because the triclosan ban didn’t apply to hand sanitizers — Hartmann said you should follow the Centers for Disease Control and Prevention’s advice of using plain ol’ soap and water.

Just make sure to lather and scrub for at least 20 seconds — one study of 3,700 bathroom users found people only wash their hands for six seconds on average (this is also me).

“Anything we can do to try to contain the problem of antibiotic resistance, we should be doing,” Hartmann said.

Left: A survey of dust in 42 athletic facilities in Oregon found living germs that were resistant to common antibiotics in all but one facility. These germs arose potentially because of the widespread use of triclosan in sanitizers and other everyday goods. Photo by StockPhotoPro/via Stock Adobe