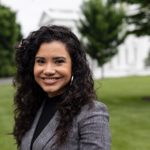 Seven of the Republican House members who voted to impeach former President Trump have already retired or lost their primary races. There has not been a more vocal GOP critic of Trump than Wyoming Rep. Liz Cheney, and she is now facing an uphill battle to retain her seat in Congress. Laura Barrón-López traveled to Wyoming to speak with voters ahead of Tuesday's primary election.

Laura Barrón-López is the White House Correspondent for the PBS NewsHour, where she covers the Biden administration for the nightly news broadcast. She is also a CNN political analyst.