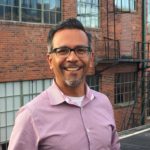 Correction: The names of the landscape architects who designed the Embrace were not included in this piece. They are Tina Chee and Marc Salette of CHEE SALETTE.

Eleven years ago this past weekend, on Jan. 8, a gunman opened fire at a political event in Arizona. That moment in 2011 underscored both the dangerous divisions and the epidemic of gun violence in America. Stephanie Sy visits Tucson, where a Jan. 8 memorial is steeped in symbolism starting with its location. It's part of our arts and culture series, CANVAS.

Phil Maravilla is the senior producer of PBS NewsHour West, NewsHour’s bureau at the Walter Cronkite School of Journalism and Mass Communication at Arizona State University, which is primarily responsible for covering the Western US and updating the nightly broadcast when news warrants for airings in the West and online.