Emergency responders continued to dig through the carnage of a train wreck in northern India on Sunday that killed more than 100 people in the country’s worst crash since 2010.

Most of the victims were being pulled from two carriages near the engine that flipped around 3 a.m. local time, while the majority of people were sleeping. It was on an express railway train with 14 carriages that leapt from the tracks while on its way from Indore in Madhya Pradesh to Patna in the state of Bihar. 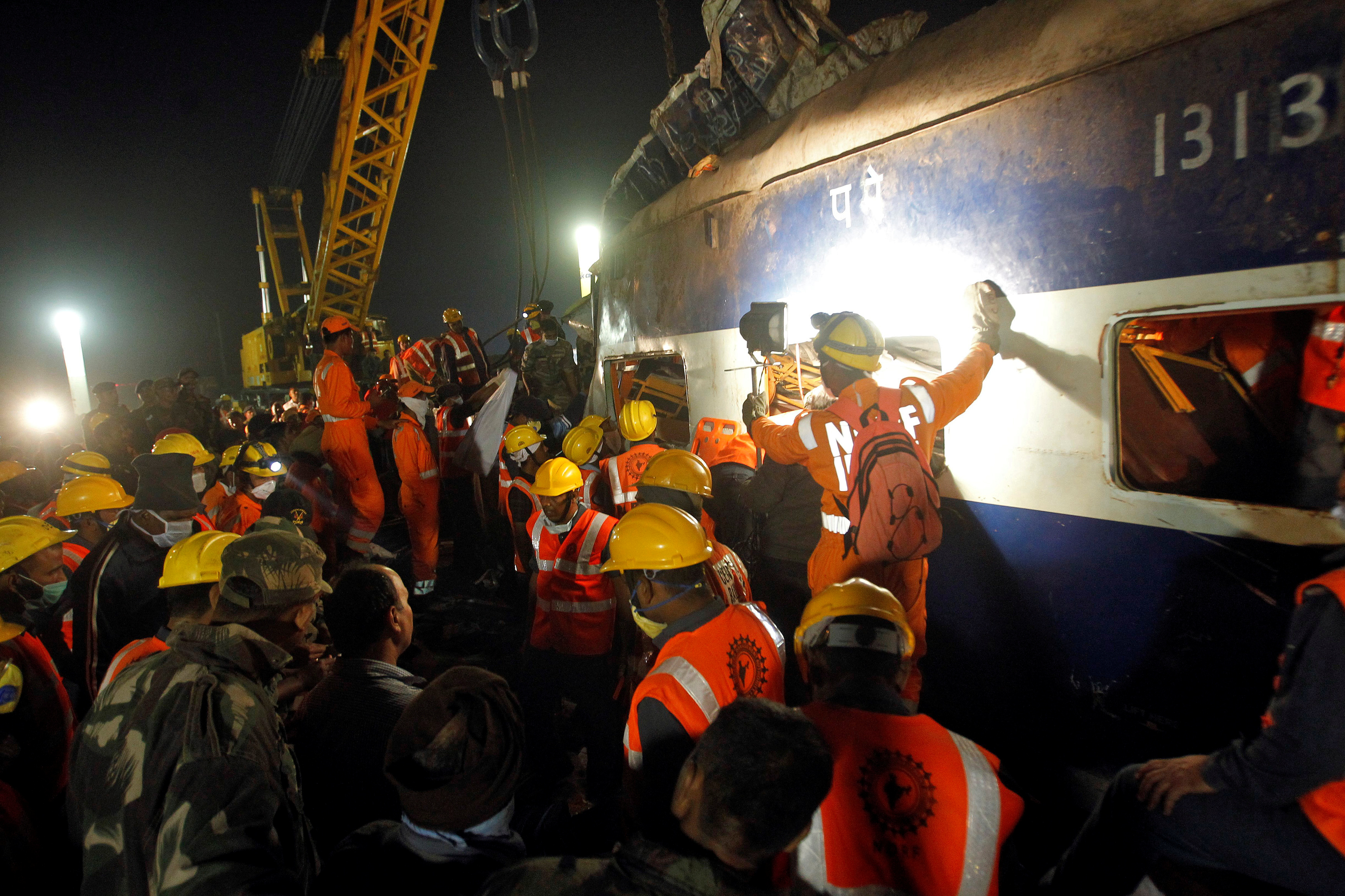 Rescue workers search for survivors at the site of a train derailment in Pukhrayan, south of Kanpur city, India November 20, 2016. Photo by Jitendra Prakash/Retuers

While the cause remained unclear, it happened halfway into the 26-hour train ride, about 400 miles east of its destination, near the city of Kanpur in the state of Uttar Pradesh.

“The death toll has reached 120. At least 200 others are injured,” Zaki Ahmad, the police inspector general of Kanpur Zone, told the Agence France-Presse news agency.

Desperate family members were trying to break their way into the carriages to find unaccounted family or friends as well as gather belongings, according to Reuters. Rescue officials with yellow helmets and orange jackets were cutting through the mangled blue metal and carrying survivors through the crowd. 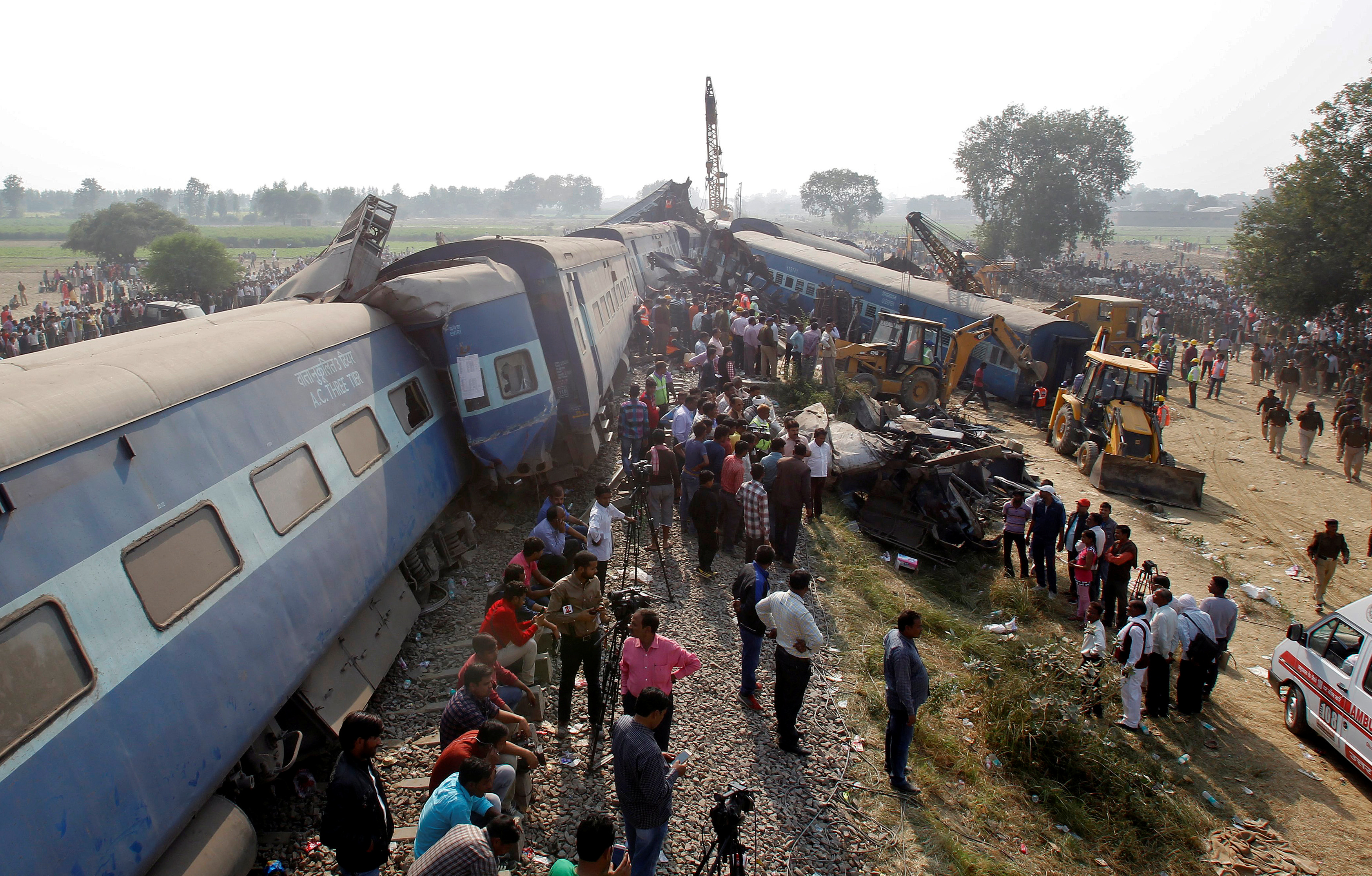 Rescue workers search for survivors at the site of a train derailment in Pukhrayan, south of Kanpur city, India November 20, 2016. Photo by Jitendra Prakash/Reuters

“We are using every tactic to save lives but it’s very difficult to cut the metal carriages,” Pratap Rai, a senior railway official told Reuters from the accident site.

The Ministry of Railways posted a preliminary list names of those who died.

Name List of Passengers died in the accident of train no 19321 pic.twitter.com/3LSdIMluCN

Ruby Gupta, who was travelling for her wedding, was searching for her father.

“I have been looking everywhere for him,” she told an NDTV reporter. “Some people told me to look in hospitals and in morgues, but I am clueless as to what to do.”

Meanwhile, people in a nearby village set up temporary kitchens and tents for rescuers and survivors, Reuters reported.

India’s vast railway system is the fourth largest in the world, running 11,000 trains that are mostly for passengers that carry more than 20 million people. The system is intrinsic to life in a country with more than 1 billion people, but it has come under scrutiny for its safety record – more than 17,000 people died from falling off the roofs or crossing tracks alone in 2014.

In 2010, a passenger train crashed into a freight train in the eastern state of West Bengal, killing 146 and injuring over 200.

Officials also said on Sunday they would compensate the bereaved and those who were injured.

Prime Minister Narendra Modi tweeted that his prayers were with those who were injured.

Anguished beyond words on the loss of lives due to the derailing of the Patna-Indore express. My thoughts are with the bereaved families.

Left: Rescue workers search for survivors at the site of a train derailment in Pukhrayan, south of Kanpur city, India November 20, 2016. Photo by Jitendra Prakash/Reuters