EDINBURGH, Scotland — Some 10,000 people marched Saturday through the Scottish capital of Edinburgh to protest U.S. President Donald Trump, while police tried to find a paraglider who breached a no-fly zone and flew a protest banner over the golf resort where Trump is staying.

The glider carried a banner reading “Trump: Well Below Par” over Trump’s Turnberry golf resort in western Scotland on Friday night to protest his environmental and immigration policies. Greenpeace, in a statement, claimed the protest forced the president to take cover, saying “as the glider appears overhead the president can be seen making for the entrance breaking into a trot.”

How do you deliver a message to someone who doesn't want to listen? #Resist #StopTrump pic.twitter.com/5Vb1w1XBfI

The environmental group said it had informed police about the stunt 10 minutes before the glider arrived. 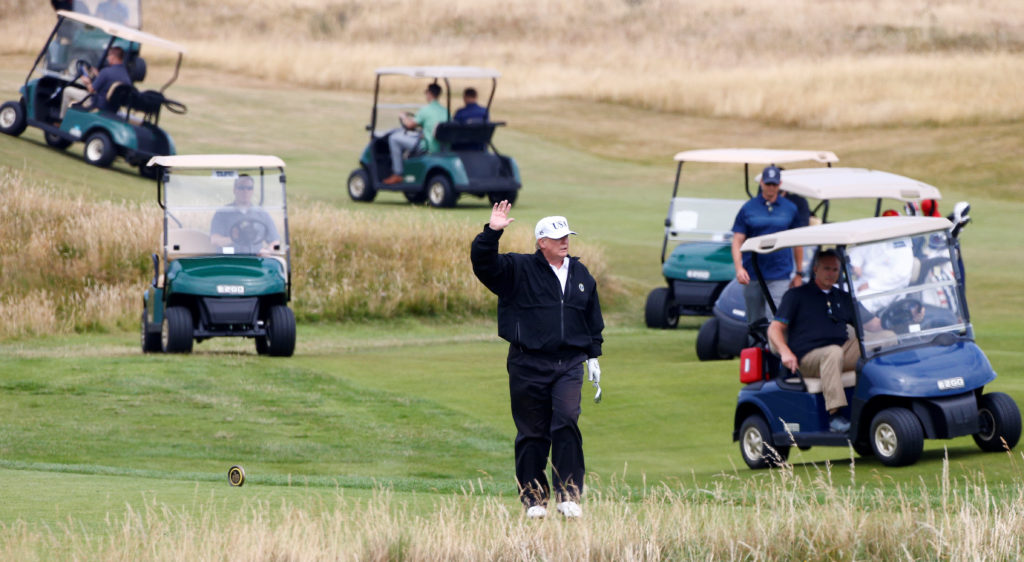 U.S. President Donald Trump gestures as he walks on the course of his golf resort, in Turnberry, Scotland July 14, 2018. Photo by Henry Nicholls/Reuters

In Edinburgh, a police helicopter almost drowned out the chants of the protesters, who plan to launch into the sky the giant “Baby Donald” balloon — depicting the president as an angry orange baby. The same balloon flew over anti-Trump protests in London on Friday, when thousands crammed the streets of the British capital to vent their anger over Trump’s first official visit to Britain. 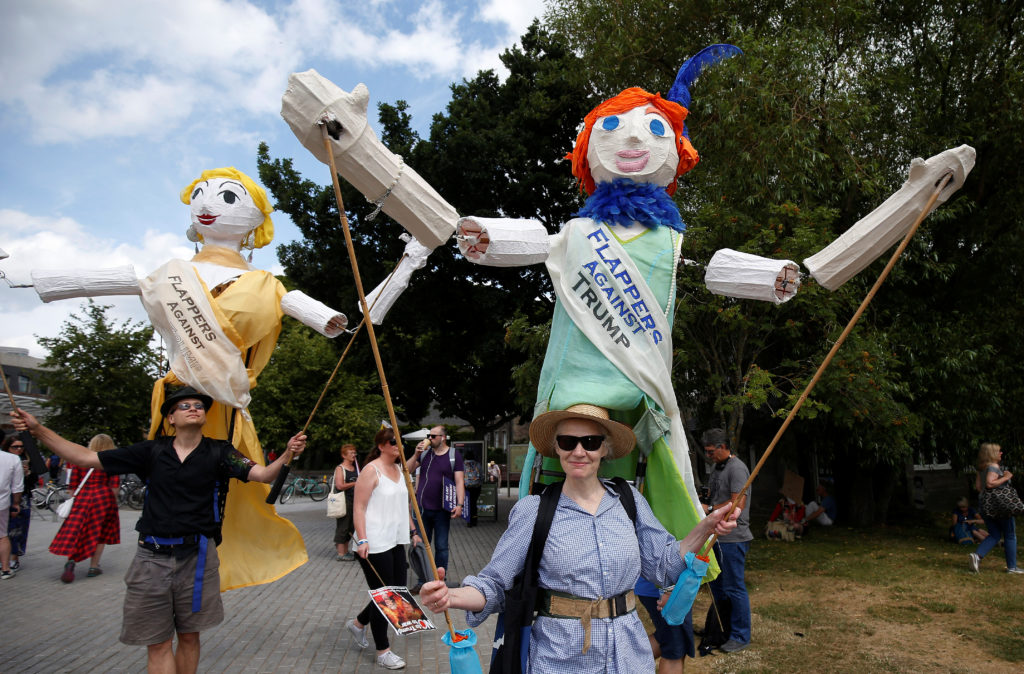 Demonstrators carrying female models on their back prepare for a rally to protest against the visit of U.S. President Donald Trump to Britain, in Edinburgh, Scotland July 14, 2018. Photo by Andrew Yates/Reuters

Trump and his wife, Melania, were spending the weekend out of the spotlight at his Turnberry resort, ahead of his high-stakes summit Monday with Russian President Vladimir Putin in Helsinki, Finland.

Jonathon Shafi, of the group Scotland Against Trump, said he wanted to show solidarity with Americans against Trump.

“It’s not acceptable that a president talks about grabbing women, separates children from their families and gives encouragement to fascist, racists, misogynists and homophobes,” he said. “We are not anti-American, just against Trump and his divisive regime”.

"I think they like me in the UK" – Trump, before leaving Brussels to come to the UK.

This is the scene outside the Trump-brand golf resort in Scotland where Trump is currently playing pic.twitter.com/BjpEB3iTDO

Eli Roth, 56, from California but living in Edinburgh, said he doubts the U.S. president will take notice.

“I don’t think anything gets the message across to Trump, but I hope demonstrations like these encourage people in the States to fight the Trump regime,” he said. “We need to show that there are people outside America who care about what is happening and that Trump has a global impact.”