After NATO chaos, Trump met by protest, pomp in Britain

OXFORDSHIRE, England — President Donald Trump traded one hot spot for another Thursday, leaving behind a contentious NATO gathering in Brussels and moving on to Britain, where he found a government in turmoil and sizable protests shadowing his every move. All was serene, however, during a lavish evening welcome ceremony at Blenheim Palace.

Hundreds of demonstrators chanted outside the U.S. ambassador’s residence where Trump was staying on the outskirts of London, providing a preview of the forceful protests expected during his two-day British stay.

Trump was whisked away to an oasis of warm greetings at a black-tie reception at Blenheim, birthplace of Winston Churchill, the larger-than-life British leader cited by the president as a model of leadership. That was just one of several helicopter rides on the agenda for Trump, whose staff opted to keep him largely out of central London and the swarms of demonstrators who are likely to provide some of the defining images of his first official trip to the U.K.

Trump’s Marine One departure from the ambassador’s residence was met by jeers from demonstrators banging pots and pans, and another pack of protesters lined roads near the palace. Their signs read: “Dump Trump,” ”Lock Him Up,” ”There Will Be Hell Toupee.” Police worked overtime, their days off cancelled.

Trump was greeted at the palace by British Prime Minster Theresa May, whose government has been rocked by resignations from ongoing tumult over Brexit, the nation’s contentious vote to leave the European Union.

Before leaving Brussels, Trump played down the protests but acknowledged that he expected tension in Britain, which also was reeling from its soccer team’s defeat in the World Cup semifinals.

“I’m going to a few hot spots,” Trump said, looking ahead to Britain and his summit in Finland on Monday with Russian President Vladimir Putin. “And I said, ‘Putin may be the easiest of them all.’ You never know. But I’m going to a pretty hot spot right now — right? — with a lot of resignations.”

The outdoor arrival ceremony at Blenheim — Trump wore a tuxedo and first lady Melania Trump a butter-yellow, chiffon off-the-shoulder gown — was a grand affair marked by a military band in bearskin hats, hundreds of business leaders in black tie and gorgeous setting sunlight.

The mood was far less jovial in Belgium earlier in the day.

During his 28 hours there, Trump had disparaged longtime NATO allies, cast doubt on his commitment to the mutual-defense organization and sent the 29-member pact into frenzied emergency session.

Then, in a head-snapping pivot at the end, he declared the alliance a “fine-tuned machine” that had acceded to his demands to speed up increases in military spending to relieve pressure on the U.S. budget. But there was little evidence other leaders had bowed to his wishes on that front. 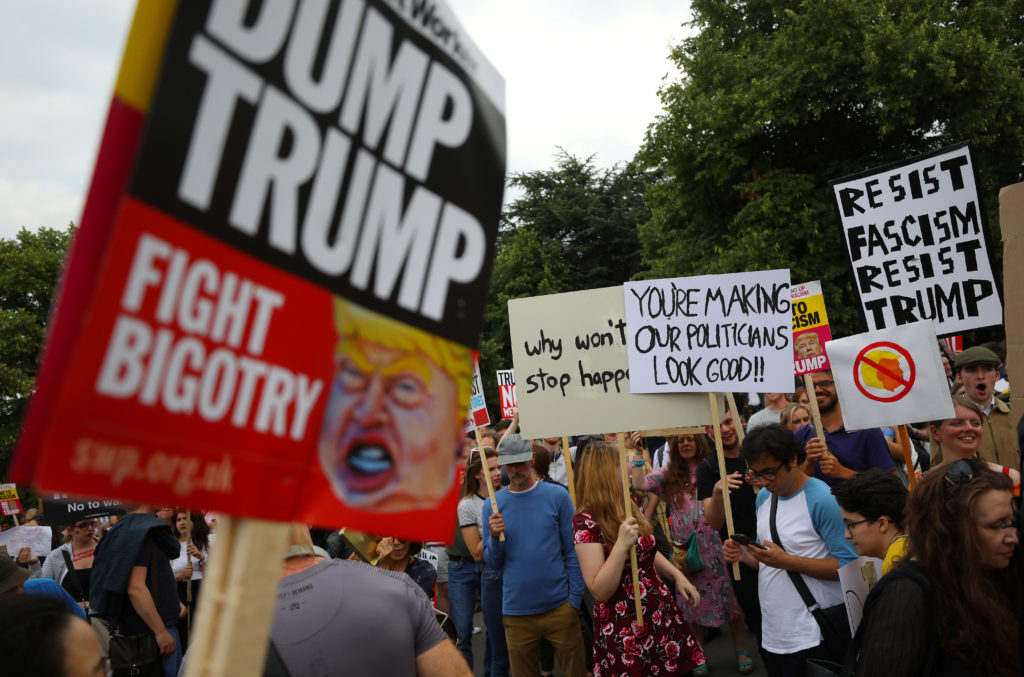 Trump claimed member nations had agreed to boost their defense budgets significantly and reaffirmed — after days of griping that the U.S. was being taken advantage of by its allies — that the U.S. remains faithful to the accord.

Neither Trump nor NATO offered specifics on what Trump said he had achieved. French President Emmanuel Macron quickly disputed Trump’s claim that NATO allies had agreed to boost defense spending beyond their existing goal of 2 percent of gross domestic product by 2024.

“There is a communique that was published yesterday; it’s very detailed,” Macron said. “It confirms the goal of 2 percent by 2024. That’s all.”

Trump berated NATO members in Brussels for failing to spend enough of their money on military matters, accusing Europe of freeloading off the U.S. and raising doubts about whether he would come to their defense if attacked.

“I can you tell you that NATO now is a really a fine-tuned machine.”

“Yesterday I let them know that I was extremely unhappy with what was happening,” he said. “They have substantially upped their commitment and now we’re very happy and have a very, very powerful, very, very strong NATO.”

He added: “I can you tell you that NATO now is a really a fine-tuned machine. People are paying money that they never paid before. They’re happy to do it. And the United States is being treated much more fairly.” But several leaders said the gathering produced no new spending commitments. Instead, they said, members reaffirmed the need to stay on track with military-budget increases that have already been underway and were branded insufficient by Trump a day earlier.

“I made clear that we know that we have to do more and that we have been doing so for quite a while,” said German Chancellor Angela Merkel.

NATO Secretary General Jens Stoltenberg cited a “new sense of urgency, and all allies agreed to redouble their efforts.”

NATO countries in 2014 set a goal of moving toward spending 2 percent of GDP on defense within 10 years. NATO has estimated that 15 members, or just over half, will meet the benchmark by 2024 based on current trends.

Left: First lady Melania Trump and President Donald Trump attend a dinner at Blenheim Palace near Oxford with British Prime Minister Theresa May and her husband Philip on July 12. Photo by Kevin Lamarque/Reuters