16 dead in election violence as Bangladesh goes to the polls

DHAKA, Bangladesh — More than a dozen people reportedly died in election-related violence in Bangladesh on Sunday, as voters went to the polls to decide whether to give Prime Minister Sheikh Hasina a third consecutive term amid critics’ claims that her leadership has become increasingly authoritarian.

In the run-up to the election, activists from both the ruling party and the opposition complained of attacks on supporters and candidates.

On Sunday, The Associated Press received more than 50 calls from people across the country who identified themselves as opposition supporters complaining of intimidation and threats, and being forced to vote in front of ruling party men inside polling booths.

“Some stray incidents have happened. We have asked our officials to deal with them,” K.M. Nurul Huda, Bangladesh’s chief election commissioner, said as he cast his vote in Dhaka, the capital. 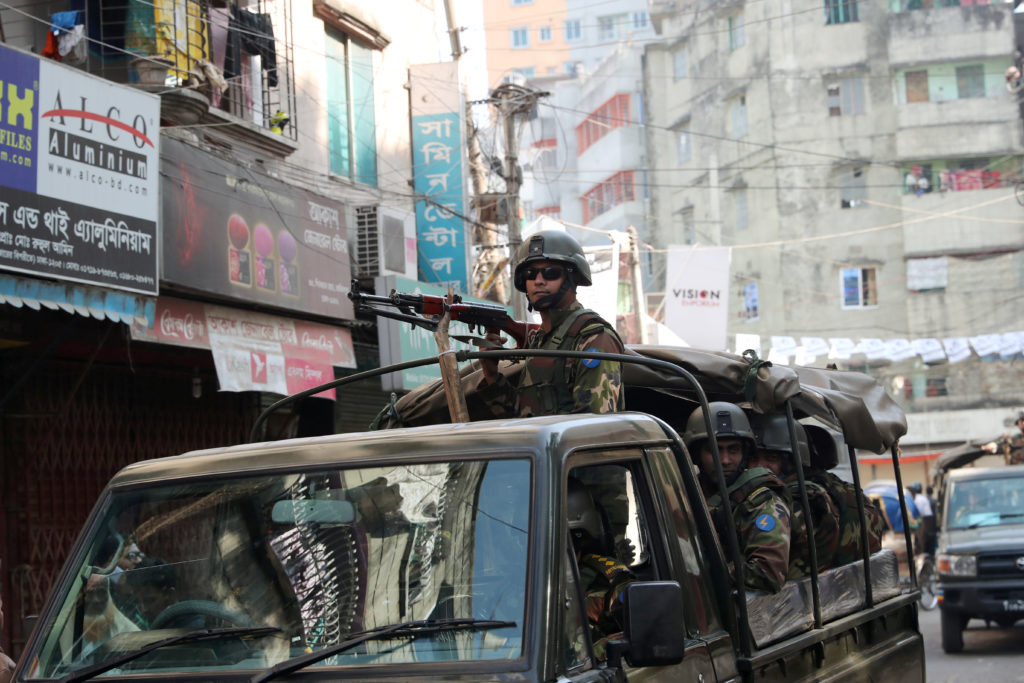 An army vehicle patrols the city during a general election in Dhaka, Bangladesh, December 30, 2018. Photo By Mohammad Ponir Hossain/Reuters

The election campaign was marred by the arrests and jailing of what the opposition says are thousands of Hasina opponents, including six candidates for Parliament. At least a dozen people were killed in campaign-related clashes.

“Hasina’s use of the state machinery to subjugate the opposition virtually ensures her electoral victory,” said Sasha Riser-Kositsky, a South Asia analyst for the New York-based Eurasia Group.

Hasina has expressed great confidence in the outcome, already inviting foreign journalists and election observers to her official residence on Monday, by which time the results are expected to be known.

While rights groups have sounded the alarms about the erosion of Bangladesh’s democracy, Hasina has promoted a different narrative, highlighting an ambitious economic agenda that has propelled Bangladesh past larger neighbors Pakistan and India by some development measures.

Voters “will give us another opportunity to serve them so that we can maintain our upward trend of development, and take Bangladesh forward as a developing country,” Hasina said after casting her ballot along with her daughter and sister in Dhaka.

Hasina’s main rival is former Prime Minister Khaleda Zia, the leader of the opposition Bangladesh Nationalist Party, who a court deemed ineligible to run for office because she is in prison for corruption.

The two women have been in and out of power — and prison — for decades. 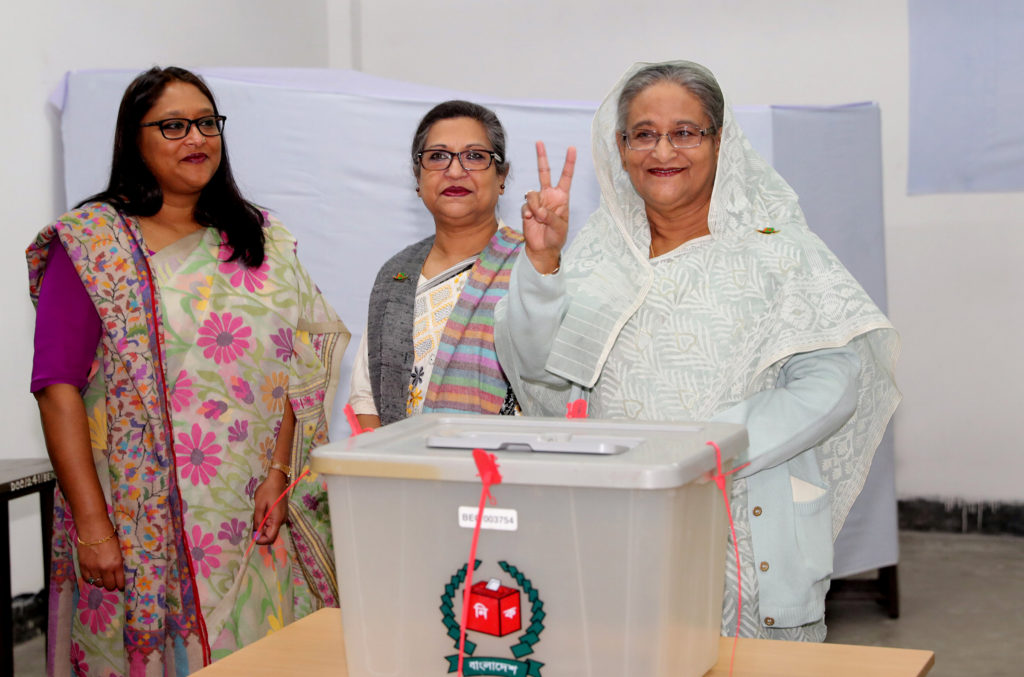 Prime Minister Sheikh Hasina gestures after casting her vote in the morning during the general election in Dhaka, Bangladesh, December 30, 2018. Bangladesh Photo By Sangbad Sangstha via Reuters

Both sides were hoping to avoid a repeat of 2014, when Zia and the Bangladesh Nationalist Party boycotted elections and voter turnout in the South Asian nation of 160 million was only 22 percent. More than half of the 300 parliamentary seats were uncontested. The Awami League’s landslide victory was met with violence that left at least 22 people dead.

On Sunday, some 104 million people in the Muslim-majority country were eligible to vote, including many young, first-time voters.

Walking with a cane, Hossain cast his vote near his home in Dhaka, saying he was receiving complaints about vote-tampering and intimidation from various parts of the country.

The more than 40,000 polling stations nationwide closed at 4 p.m., as the Islamic call to prayer came over loudspeakers.

At a polling station in the ancient city of Panam Nagar, about 20 kilometers (12 miles) southeast of Dhaka, the counting of the roughly 1,600 votes cast began immediately after voting ended. Plastic bins full of paper ballots were dumped onto a sheet on the floor, where 10 people sat in a circle to organize and count the votes.

One of the voters there, Haji Abdul Malek Mia, a 74-year-old father of five sons, said he wanted to see someone in power who would offer development. “Whoever is doing development, he should be there,” he said.

About 600,000 security officials, including army and paramilitary forces, were deployed across the country in a bid to contain violence in Bangladesh’s 11th general election. The country’s telecommunications regulator shut down mobile internet services nationwide to prevent possible protests from organizing.

The normally traffic-clogged streets of the capital were largely empty because of a ban on vehicles for everyone except election observers and journalists. Many Dhaka residents had left days earlier to vote in their hometowns.

At one polling station, Istiaq Ahmed, a doctor in Dhaka, said it was critical that people “select the right government to maintain the development and enrich our country further.”

Another voter, Sultana Rajia Rotna, said she went out to cast her ballot after hearing that the streets of Dhaka were peaceful.

“I think the country has already developed much and it will be developed more,” she said in Bengali. “That’s why I’m here casting my vote.”

Left: Hindu voters wait to cast their vote outside a voting center during the general election in Dhaka, Bangladesh December 30, 2018. Photo By Mohammad Ponir Hossain/Reuters