AMESBURY, England — British counterterrorism police were investigating Wednesday after two people were left in critical condition, exposed to an unknown substance a few miles from where a former Russian spy and his daughter were poisoned with a nerve agent.

The Wiltshire Police force declared a “major incident” after a man and a woman in their 40s were hospitalized after being found unconscious Saturday at a residential building in Amesbury, eight miles (13 kilometers) from Salisbury, where Sergei and Yulia Skripal were poisoned on March 4.

London’s Metropolitan Police force said “given the recent events in Salisbury,” counterterrorism officers were working with local police on the investigation. British media reported that samples of the mystery substance had been sent to the Portdon Down defense research laboratory for testing.

Police cordoned off a home and other places the two people visited before falling ill, including a nearby church and a pharmacy, but health officials said there was not believed to be a wider risk to the public.

A major incident is a designation allowing British authorities to mobilize more than one emergency agency.

The emergency services’ response echoes that in the case of the Skripals, whose illness initially baffled doctors after they were found unconscious on a park bench in Salisbury. Scientists at Porton Down concluded they had been poisoned with Novichok, a type of nerve agent developed by the Soviet Union during the Cold War.

Britain accuses Russia of poisoning the Skripals, a claim Moscow strongly denies. The poisoning sparked a Cold War-style diplomatic crisis between Russia and the West, including the expulsion of hundreds of diplomats from both sides.

The two Amesbury victims were being treated at Salisbury District Hospital, where the Skripals spent weeks in critical condition.

Police said authorities initially believed the latest victims might have taken a contaminated batch of heroin or crack cocaine.

“However, further testing is now ongoing to establish the substance which led to these patients becoming ill and we are keeping an open mind as to the circumstances surrounding this incident,” police said in a statement. “At this stage, it is not yet clear if a crime has been committed.” 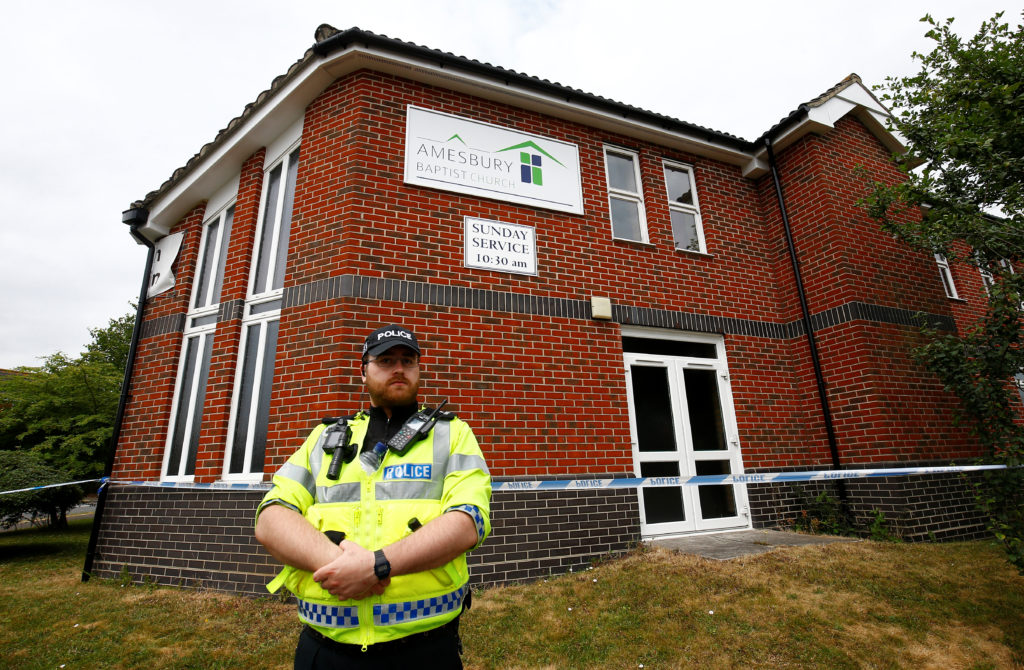 A police officer stands in front of Amesbury Baptist Church, which has been cordoned off after two people were hospitalised and police declared a ‘major incident’, in Amesbury, Wiltshire, Britain. Photo by Henry Nicholls/Reuters

Sergei Skripal, 67, is a former Russian intelligence officer who was convicted of spying for Britain before coming to the U.K. as part of a 2010 prisoner swap. He had been living quietly in Salisbury, a cathedral city 90 miles (145 kilometers) southwest of London, when he was struck down along with his 33-year-old daughter Yulia, who was visiting him.

Residents of the street at the center of the Amesbury investigation — in a quiet neighborhood of newly built houses and apartments — said they had received little information about the unknown substance from authorities.

“Amesbury’s a lovely place — it’s very quiet, uneventful,” said Rosemary Northing, who lives a couple of hundred yards (meters) away from the cordoned-off building. “So for this to happen, and the media response and the uncertainty, it’s unsettling.”

Neighbors said police cars and fire engines descended on the home late Saturday. Student Chloe Edwards said she saw people in “green suits” — like those worn by forensics officers — and her family was told to stay inside their home for several hours.

“We wanted to know what happened. And with the Russian attack happening not long ago, we just assumed the worst,” said Edwards.

Among the sites cordoned off was a Baptist church where the victims attended a community event on Saturday. Church secretary Roy Collins said about 200 people were at the neighborhood event, but “nobody else has suffered any ill-effects.”

Doctors who treated the Skripals say they have made a remarkable recovery but they still don’t know what the long-term prognosis is.

The Skripals have been taken to an undisclosed location for their protection.

Kirka reported from London. Jill Lawless in London contributed to this story.

Left: Police officers guard outside a branch of Boots pharmacy, which has been cordoned off after two people were hospitalized and police declared a 'major incident', in Amesbury, Wiltshire in Britain. Photo by Henry Nicholls/Reuters

Expelling diplomats over ex-spy attack will do ‘catastrophic damage’ to Russia in UK, says ambassador