JAKARTA, Indonesia (AP) — Indonesia’s President Joko Widodo said Wednesday that authorities have the volatile situation in the capital Jakarta under control after six people died in riots by supporters of his rival in last month’s presidential election.

The clashes began Tuesday night when supporters of former general Prabowo Subianto tried to force their way into the downtown offices of the election supervisory agency and have continued unabated since then. More than two dozen vehicles were burned as rioters took over neighborhoods in central Jakarta, throwing rocks and Molotov cocktails at police who responded with tear gas, water cannon and rubber bullets.

Flanked by the military chief and other top leaders, Widodo said: “I will work together with anyone to advance this country, but I will not tolerate anyone who disrupts the security, democratic processes and unity of our beloved nation.” 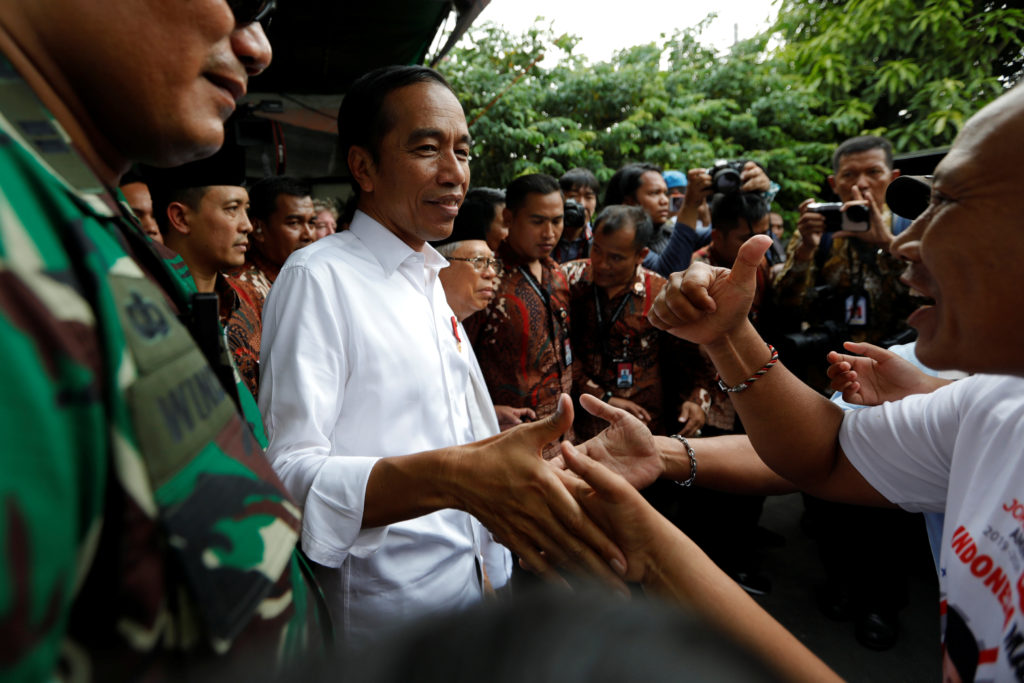 Indonesia’s Incumbent President Joko Widodo and his running mate Ma’ruf Amin greet their supporters after making a public address following the announcement of the last month’s presidential election results at a rural area of Jakarta, Indonesia, May 21, 2019. Photo by Willy Kurniawan/Reuters

Subianto, a volatile ultra-nationalist politician, has refused to accept the official results of the April 17 election and instead declared himself the winner. The Election Commission on Tuesday said that Widodo, the first Indonesian president from outside the Jakarta elite, had won 55.5% of the vote, securing the moderate technocrat a second term. Subianto, an elite figure from a wealthy family connected to former dictator Suharto, also lost to Widodo in 2014. He has made four unsuccessful bids for the presidency since Suharto was ousted in 1998.

“The vast majority of both clearly accepted the election results. By tacitly backing the protesters, Prabowo has lost any remaining legitimacy he had left and clearly shows his true colors as a narcissistic New Order-era relic,” Arifanto said, referring to the Suharto era.

Rudiantara, the communications and information technology minister, said features of social media including Facebook, Twitter and WhatsApp will be restricted on a temporary basis to prevent the spread of hoaxes and inflammatory content. He said messaging systems will still work for text and voice messages but photos and videos will be blocked or slowed. 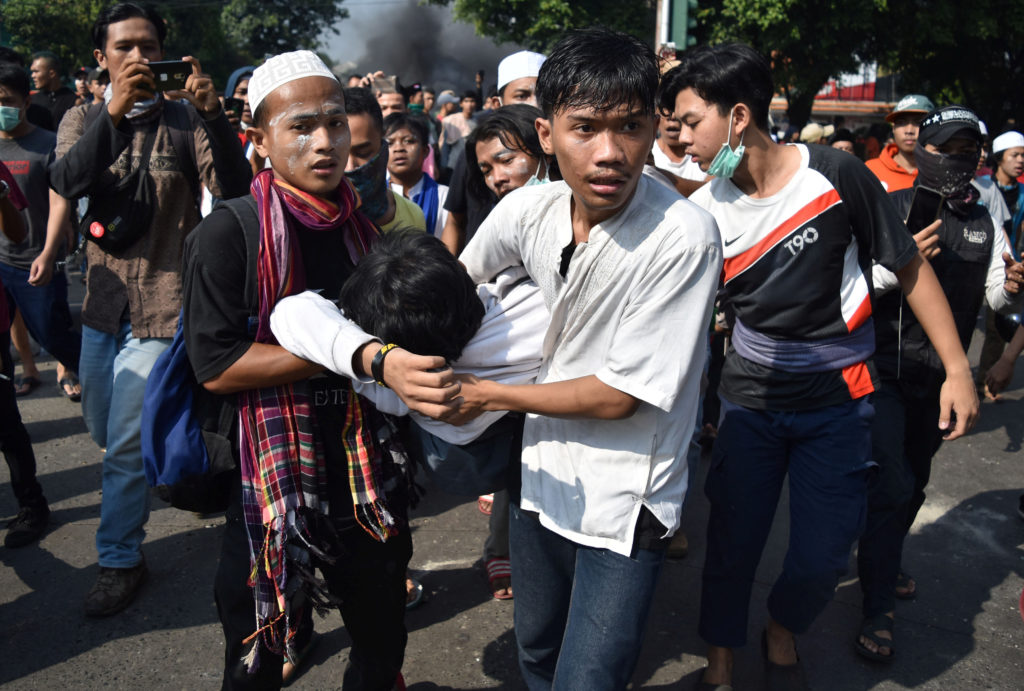 People carry an injured protester to safety during clashes with police in Jakarta, Indonesia, May 22, 2019. Photo by Antara Foto/Aditya Pradana Putra/ via Reuters

National police chief Tito Karnavian said the people who died in the rioting were hit by gunshots or blunt devices. Authorities are still investigating the death causes and are not ruling out the involvement of third parties acting as provocateurs.

“There are attempts to create martyrs, blaming security officials for building public anger,” he said.

The rioting in Jakarta was planned and not spontaneous, according to police. Officers found an ambulance filled with stones and some of the dozens of people arrested had envelopes of money, said national police spokesman Muhammad Iqbal. Many of those arrested and come from outside Jakarta, he said. 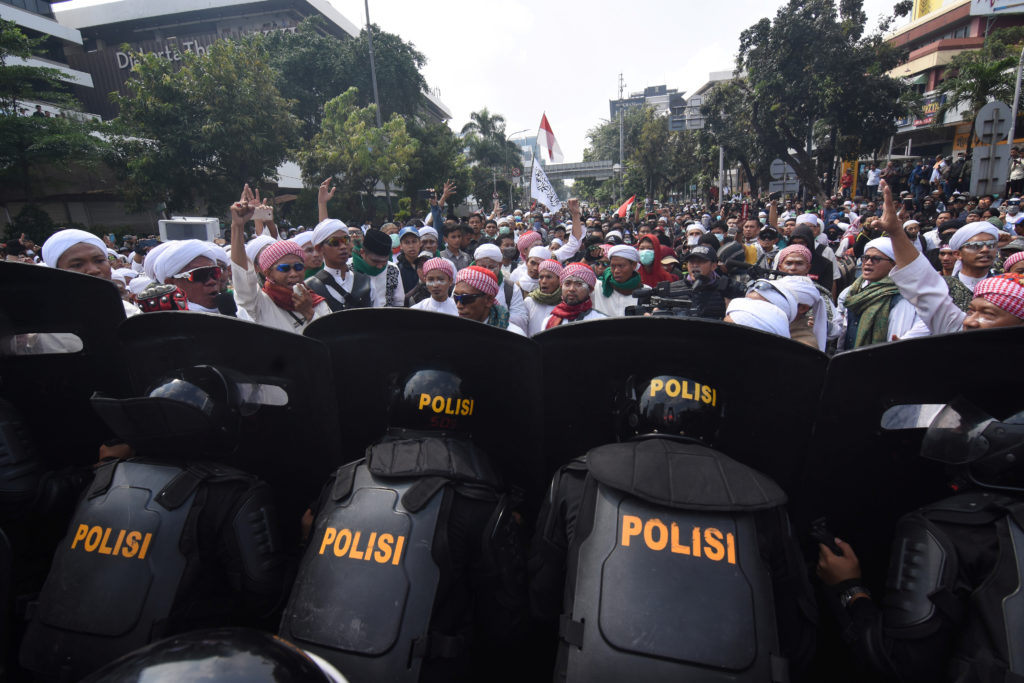 The government had deployed some 50,000 police and soldiers in Jakarta in anticipation of protests following the official election results. Many residents have left the city and parts of the downtown are closed to traffic with the election supervisory agency and Election Commission barricaded with razor wire.

In the past week, authorities have arrested three pro-Subianto activists on suspicion of treason. They included Sunarko, a retired general and former commander of Indonesia’s special forces who uses a single name. Police allege there was a plot to seize crucial government buildings in Jakarta.

Subianto’s campaign plans to challenge the election in the Constitutional Court. They allege massive fraud in the world’s third-largest democracy but have provided no credible evidence. 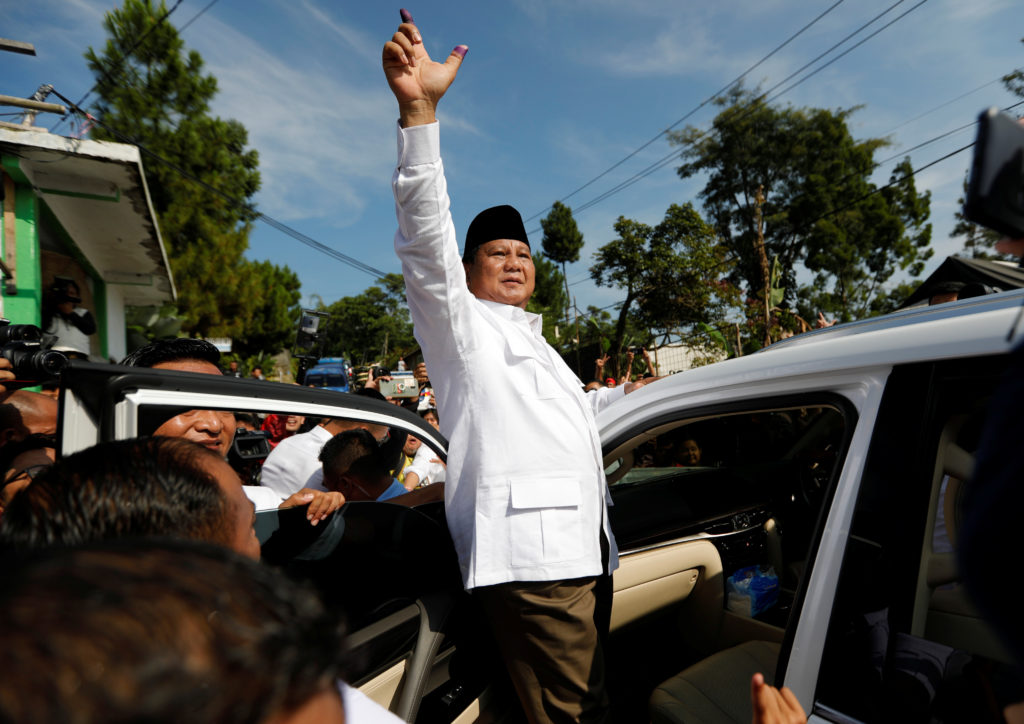 The former special forces general and members of his campaign team had said they would mobilize “people power” during days of street protests. The former general has also called on supporters to refrain from violence.

Subianto ran a fear-based campaign, emphasizing what he sees as Indonesia’s weakness and the risk of exploitation by foreign powers or disintegration. He aligned himself with hard-line Muslim groups and won massive majorities in conservative provinces such as Aceh, which follows Shariah law, but was defeated by Widodo in the president’s populous East Java and Central Java strongholds.