Seven percent of priests in the Australian Catholic Church have been accused of sexually abusing children between 1950 and 2010, according to a new report released Monday.

The report from Australia’s Royal Commission into Institutional Responses to Child Sexual Abuse, which since 2013 has been investigating how the Catholic church and others have responded to abuse, says 4,444 people had reported being sexually abused at more than 1,000 Catholic institutions across Australia between 1980 and 2015.

“The accounts were depressingly similar,” authors of the report wrote. “Children were ignored or worse, punished. Allegations were not investigated. Priests and religious were moved. The parishes or communities to which they were moved knew 16 nothing of their past. Documents were not kept or they were destroyed. Secrecy prevailed as did cover ups. Priests and religious were not properly dealt with and outcomes were often not representative of their crimes. Many children suffered and continue as adults to suffer from their experiences in some Catholic institutions.”

Francis Sullivan, CEO of the Truth Justice and Healing Council, which coordinates the Catholic Church’s response to the inquiry, called the situation a “massive failure on the part of the Catholic Church in Australia to protect children from abusers.”

“These numbers are shocking. They are tragic and they are indefensible,” Sullivan said at a public hearing Monday. “As Catholics, we hang our heads in shame.” 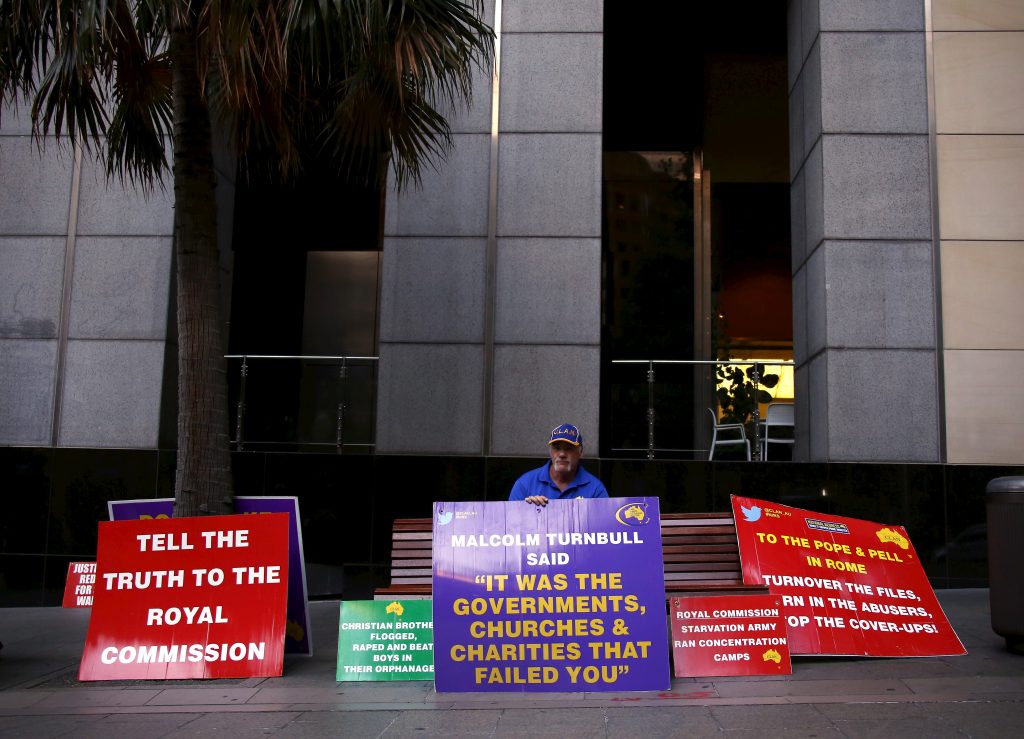 A man who claims to have been sexually abused by the Catholic Church holds a placard last year as he stands outside the venue for Australia’s Royal Commission into Institutional Response to Child Sexual Abuse in Sydney, Australia. Photo by REUTERS/David Gray.

Of the 309 cases the commission made to the Australian police, 27 have been prosecuted and another 75 are under investigation. The other cases are either pending or the people involved have died, the report says.

Other senior officials in the Catholic Church will testify over the next few weeks, the Associated Press reported.

“The coming weeks will be traumatic for everyone involved, especially the survivors,” Archbishop Anthony Fisher of Sydney said in a statement released by the Vatican. “Confronting as it will be, I remain determined to do all we can to assist those who have been harmed by the Church and to work towards a culture of greater transparency, accountability and safety for all children.”

The commission plans to compile a final report by the end of the year.

A similar report detailing abuse in the U.S. was released in 2002. That report found 4 percent of priests serving between 1950 and 2002 were accused of sexually abusing children, an investigation later dramatized by the movie “Spotlight.”

A separate review by the Boston Globe revealed sexual abusers of minors within the Catholic Church were hidden away and allowed to remain in the church for years. The Globe later reported 271 clergy were publicly accused of child sexual abuse in the Boston area.

The Globe’s Spotlight investigator Michael Rezendes turned to Twitter today, writing, “It seems to be the same story all over the world, alas.”

It seems to be the same story all over the world, alas. https://t.co/cMpqFzcvm0

Left: Paul Levely, a child sex abuse victim, wears a t-shirt that says "no more silence" outside of a 2016 testimony on child sex abuse by a Vatican official in Rome, Italy. A new report says 7 percent of Australia's Catholic priests have been accused of sexually abusing children. Photo by Alessandro Bianchi/Reuters.