KUTUPALONG, Bangladesh — Thousands of Rohingya Muslim refugees on Saturday marked the one-year anniversary of the attacks that sent them fleeing to safety in Bangladesh, praying they can return to their homes in Myanmar and demanding justice for their dead relatives and neighbors.

More than 15,000 gathered in the morning on a hilltop in the Kutupalong refugee camp, part of a sprawling web of settlements that are now home to nearly 900,000 Rohingya who have fled Myanmar to escape violence.

The camps exploded in size last year after Myanmar’s army launched a wave of anti-Rohingya attacks on Aug. 25, with some 700,000 Rohingya eventually pouring across the border. Thousands were killed in the violence. 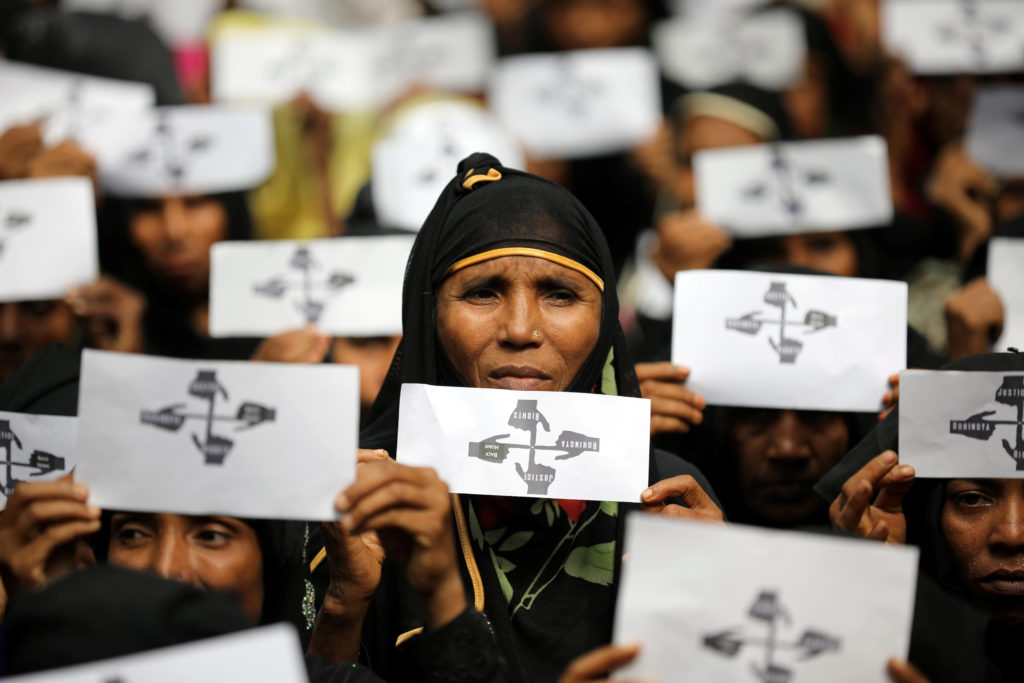 Rohingya refugee women hold placards as they take part in a protest at the Kutupalong refugee camp to mark the one-year anniversary of their exodus in Cox’s Bazar, Bangladesh, August 25, 2018. Photo by Mohammad Ponir Hossain/Reuters

The protesters — men, women and children — marched through the muddy camp, chanting slogans such as “No more genocide, we want justice.” At a mass prayer rally, one speaker repeatedly shouted, “Who are we?” to which the crowd responded in chorus: “Rohingya! Rohingya!”

Most people cried as they raised their hands while an imam who led the prayer sought God’s blessings, saying, “Please consider the people who have been killed as martyrs and place them in heaven.”

Some of the protesters carried paper flags of Myanmar. Newly setup shops inside the camp were closed during the protest, which lasted several hours.

Also on Saturday, some 100 protesters from a group of nongovernment organizations formed a human chain in front of the national press club in Dhaka, Bangladesh’s capital, to demand the international community put pressure on Myanmar’s government to try those responsible for murder, rape and arson, the English-language Daily Star reported.

“We are Rohingya, we are Muslims, we have been driven away from our land, from our homes,” an unidentified speaker told the crowd on Saturday. “We want justice. We want to go back to our homes.”

But many doubt they’ll ever be able to return despite more than a year of talks among Myanmar, Bangladesh, the United Nations and international aid agencies. Myanmar insists the Rohingya can return, and has built a series of camps for them, but few believe they would be safe there, or that they could finally be accepted as citizens.

While Rohingya have lived for centuries in Myanmar, they have long been treated as outsiders, Muslims in a largely Buddhist nation who are denied citizenship and many basic rights. Many in Myanmar ridicule them as “Bengalis” who came illegally from Bangladesh. 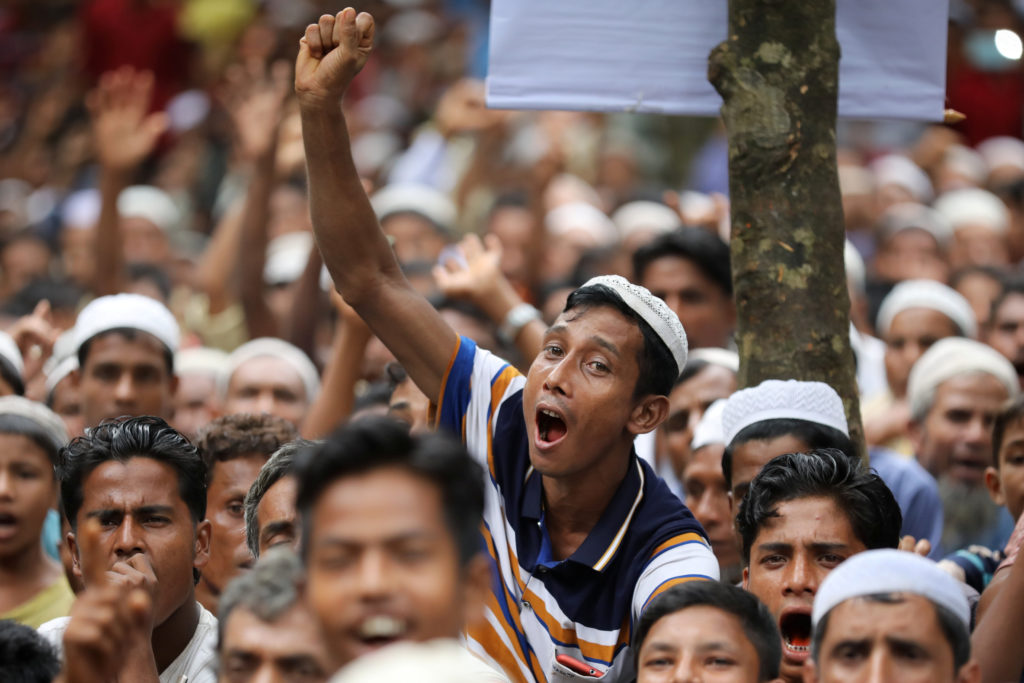 A Rohingya refugee shouts a slogan as he takes part in a protest at the Kutupalong refugee camp to mark the one year anniversary of their exodus in Cox’s Bazar, Bangladesh, on Aug. 25, 2018. Photo by Mohammad Ponir Hossain/Reuters

Most live in poverty in Myanmar’s Rakhine state, just across the border from Bangladesh. Over the past couple of decades, over 100,000 have fled into Bangladesh in earlier waves of violence. In total, more than 1 million Rohingya refugees currently live in Bangladesh.

In an editorial on Saturday, Bangladesh’s Daily Star newspaper was critical of Myanmar for its failure to make any visible progress in taking the refugees back over the last year, while it urged the international community to take action.

“We reiterate our call to the international community, particularly the U.N., to investigate allegations of crimes against the Rohingya people because the Myanmar government has shown little interest in bringing those responsible for such violations of human rights to justice,” the editorial said.

“It is time to tell the Rohingya that they are not a forgotten people,” it said.

The violence began on Aug. 24, 2017, with a series of attacks on Myanmar police stations by a small Rohingya militant group that killed a dozen security personnel. In retaliation, Myanmar’s military and Buddhist mobs launched waves of attacks, killing people and emptying villages in what many in the international community see as a calculated attempt to drive the Rohingya from the country.

Left: Rohingya refugeees pray as they take part in a protest at the Kutupalong refugee camp to mark the one year anniversary of their exodus in Cox's Bazar, Bangladesh, on Aug. 25, 2018. Photo by Mohammad Ponir Hossain/Reuters