A year ago, a bloody counterinsurgency campaign drove hundreds of thousands of ethnic Rohingya people from northern Myanmar into neighboring Bangladesh.

Rohingya refugees described burned villages, rape and beatings at the hands of soldiers in Myanmar’s Rakhine state in what the U.N. has characterized as “acts of genocide.” The army has denied the accusations.

Today, the 700,000 Rohingya refugees are living in bamboo and tarp-covered shelters in sprawling camps near Cox’s Bazar in southern Bangladesh. Most — about 600,000 — live in the Kutupalong-Balukhali extension camp, known as the “mega camp.”

The refugees said they feel much safer in the camps but yearn for justice and a state to call their own.

“They can actually sleep through the night, and their kids don’t have to listen to bullets whizzing by,” said Caryl Stern, president and CEO of UNICEF USA, who recently visited the camps. 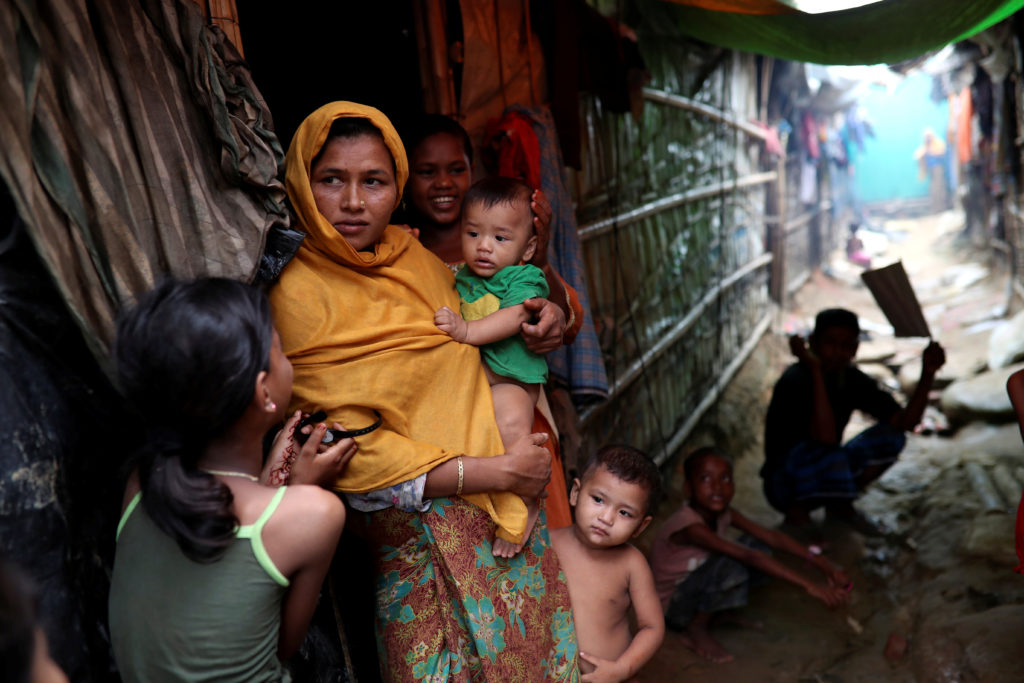 Rohingya refugees have settled into makeshift camps, including this one called Kutupalong, in Cox’s Bazar, Bangladesh. Photo by Mohammad Ponir Hossain/Reuters 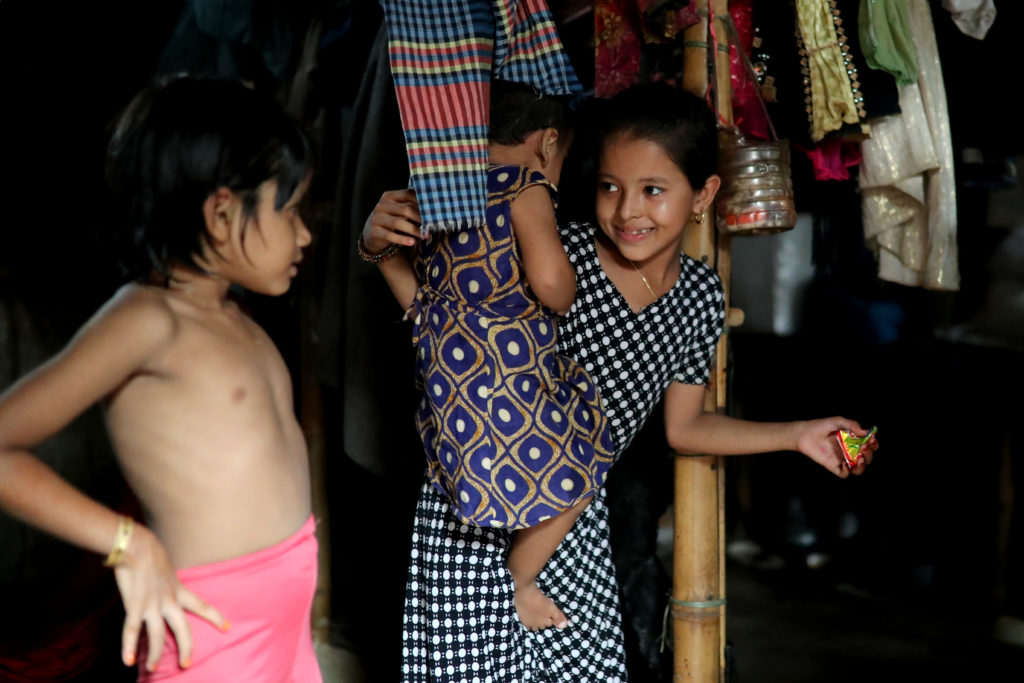 UNICEF says Rohingya refugee children might become a “lost generation” if they can’t continue their education in the camps. Photo by Mohammad Ponir Hossain/Reuters

The number of new arrivals has fallen significantly since the start of the crisis, when around 500,000 people arrived in just a few weeks, but Rohingya are still entering the camps in need of humanitarian assistance, said the International Organization for Migration’s Fiona MacGregor, who is based in Cox’s Bazar.

Here’s what we know about the status of Rohingya refugees and what’s next.

The International Organization for Migration is working with other U.N. agencies to distribute liquefied petroleum gas stoves to refugees, who have been stripping nearby forests for firewood to do their cooking. The agencies plan to hand out 200,000 stoves and gas cylinders to cover almost every refugee household, MacGregor said. They plan to provide another 47,000 stoves and cylinders to the local community as well, she added.

Doctors Without Borders, which runs 19 health facilities and mobile clinics among the camps, said the medical needs of the refugees are changing. “At first, more than half of [the] patients were treated for violence-related injuries, but other health concerns soon emerged, linked to the overcrowded and unhygienic conditions in the camps,” which are worsened by monsoon rains, the group reported.

The World Health Organization, working with the Bangladesh government and local health groups, set up 155 “health posts” over the past year and provided vaccinations to protect against diseases such as cholera, measles and diphtheria. 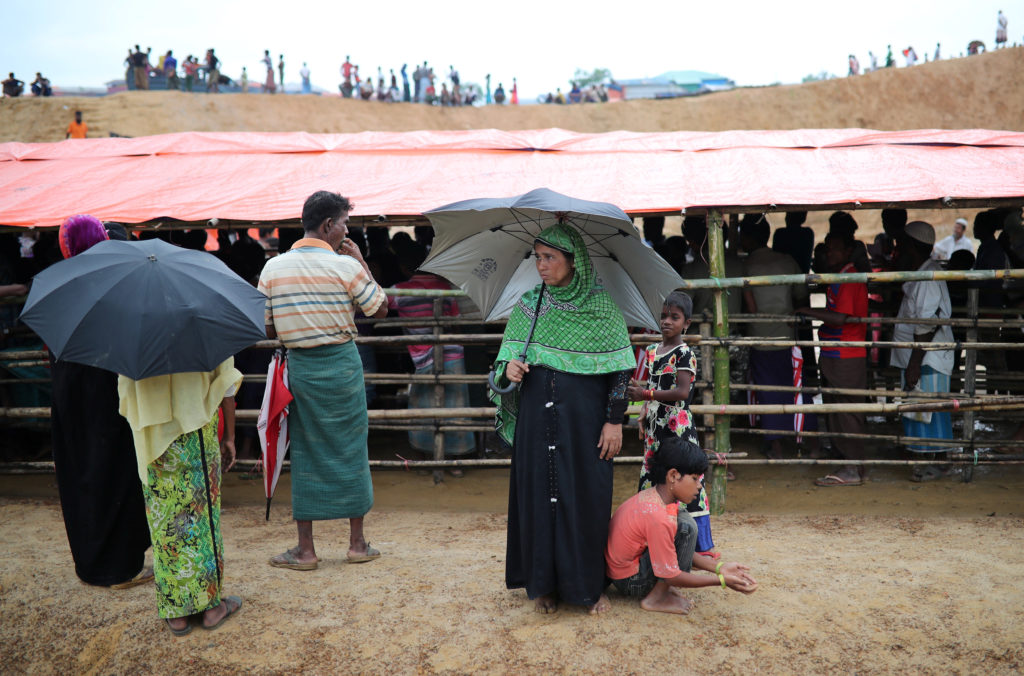 Rohingya refugees line up for meat from a relief distribution center in the Balukhali refugee camp in Cox’s Bazar, Bangladesh. The refugees are dependent on aid agencies for all of their food. Photo by Mohammad Ponir Hossain/Reuters

With basic medical, food and water needs addressed, the refugees are expressing a desire for other long-term services, like higher education. UNICEf and its local partners operate than 1,000 primary-level learning centers in the camps that teach basic reading and writing in English and history. But the refugees told them they also would like secondary-level classes that offer career training, such as computers and coding, UNICEF’s Stern said.

“They’re concerned with what’s going to happen to their children. What happens if they’re here for a long time? Will they ever be skilled and prepared to take on a life of their own? Those are their really big concerns,” she said.

When can the Rohingya return home?

Rohingya refugee leaders, the government of Bangladesh and the U.N. all say that the refugees must be able to return home to Myanmar if they wish, MacGregor said. “However, they must be able to do so in a voluntary, safe, dignified and sustainable manner and it is evident conditions are not in place for that to happen.”

In May, the Myanmar government announced an agreement with the United Nations to allow the Rohingya to return. But the refugees are concerned they still won’t be safe, and the U.N. cautioned that citizenship rights and an end to violence must be established first.

Pavlo Kolovos, Doctors Without Borders’ head of mission in Bangladesh, said the reality is that hundreds of thousands of Rohingya have been displaced in Bangladesh and elsewhere for decades, “and it may be decades until they can safely return to Myanmar, if ever.” 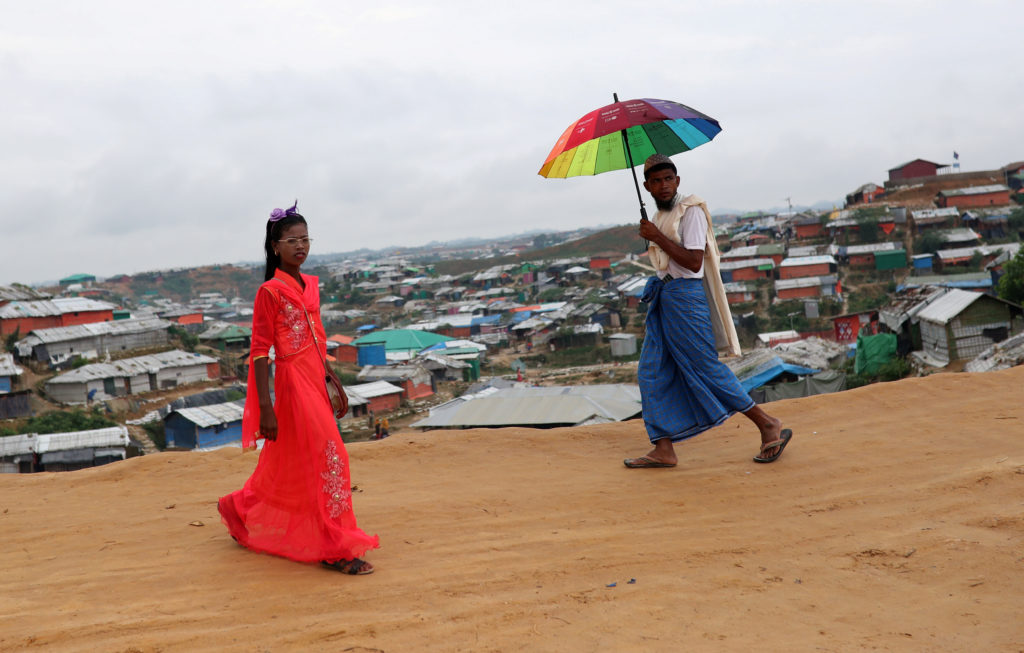 The Rohingya refugees worry about their safety if they returned to Myanmar. Photo by Mohammad Ponir Hossain/Reuters

The United Nations also documented an increase in child brides among Rohingya girls who enter other countries, including Indonesia and Malaysia. Advocates worry that displacement makes women and girls more vulnerable to human trafficking.

Stern said when she asked female refugees what they most needed, many told her the same thing: “I need to not be stateless. I need an identity. I need to know I have a home, a place where I belong.” And when she asked what they wanted: “I want justice. That’s all they kept saying, ‘I want justice.’ As someone who’s so used to being able to supply wants and needs, those were two really hard ones for me.”

We’ll have more on the Rohingya refugees on an upcoming broadcast.

Left: Rohingya refugees have their food and water needs met, but wonder how long they will have to stay in the camps. Photo by Mohammad Ponir Hossain/Reuters