More than 3,500 noncombatants died in Afghanistan during 2015, and nearly 7,500 were injured, the highest number of civilian casualties recorded since 2009 amid the country’s unceasing conflicts, according to a report released Sunday by the United Nations.

About 25 percent of those who were killed or wounded were children, a statistic the UN called “unprecedented.” 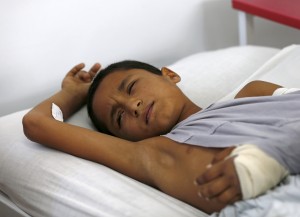 A wounded Afghan boy, who survived a U.S. air strike on a Doctors Without Borders hospital in Kunduz, receives treatment at the Emergency Hospital in Kabul October 8, 2015. The airstrike killed at least 42 patients and staff. Mohammad Ismail/Reuters

Ground fighting, improvised explosive devices and suicide attacks in the vicinity of populated urban areas of Afghanistan were behind the high number of noncombatant deaths and injuries, according to figures cited in the 2015 Annual Report on Protection of Civilians in Armed Conflict, which was made public by the UN Human Rights Office.

“The harm done to civilians is totally unacceptable,” said Nicholas Haysom, the Secretary-General’s Special Representative for Afghanistan, who leads the UN Assistance Mission in Afghanistan. “We call on those inflicting this pain on the people of Afghanistan to take concrete action to protect civilians and put a stop to the killing and maiming of civilians in 2016.”

#Afghan civilian deaths and injuries from 2009 to 2015. https://t.co/d36DpaukWD #CivCas pic.twitter.com/un8Tbuzb5W

Most of the carnage took place in northeastern and central Afghanistan, and much could be attributed to multiple battles between the Taliban and Afghan security forces in the vicinity of the Kunduz, a city of more than 200,000.

An October strike by Unites States war planes on a Doctors Without Borders facility also was a factor in the number of civilian casualties, the report said.

After decades of conflict among government and western forces and insurgent factions, more than 60 percent of the 2015 figures were caused by anti-government groups and 17 percent by forces loyal to the Afghan government.

Combined, the number of deaths and injuries totaled more than 11,000 civilians, a number that has risen ever year since 2009 for a total of nearly 59,000 victims.

#Afghan civilian deaths and injuries by parties to the conflict in 2015. https://t.co/d36DpaukWD #CivCas pic.twitter.com/fbNJrCACTG

Left: Afghan security forces arrive at the Kunduz airport, April 30, 2015.  A new United Nations report states the number of civilian casualties in Afghanistan during 2015 set records. Many who were killed or injured were centered around the city of Kunduz. Omar Sobhani/Reuters